A festival for literature

The first edition of the much anticipated Adab Festival ended on a high note, proving that a city the size of Karachi can partake of many more such festivals 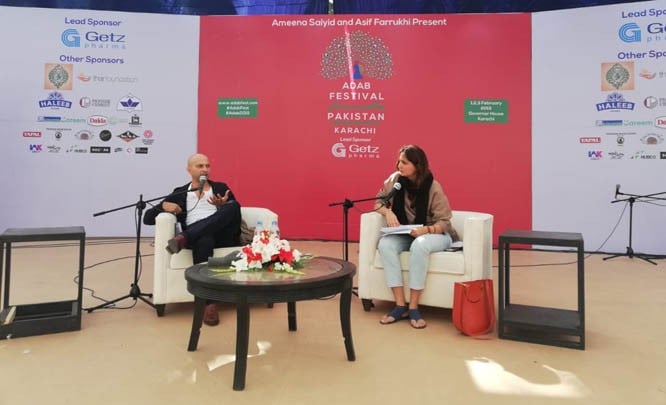 This year Adab Festival greeted the season in the city. Presented by Ameena Saiyid and Asif Farrukhi and organised by their efficient team, as promised Adab Festival (Feb 1-3, 2019) covered many areas ranging from literature to law, music, art, culture to social issues.

Before the Adab Festival, there was much curiosity in literary circles as to why there was another festival by the same team that had launched and remained associated with Karachi Literature Festival for nine years; and if the festival would be successful or not. The first Adab Festival settled all apprehensions. It proved that a mega-city like Karachi has the capacity to absorb and partake of many more such cultural and literary events. While the KLF is scheduled for the first week of March, citizens are spoilt for choice.

There was a heated discussion too on social media on choosing the Governor’s House as a venue for a literature festival. As the festival began, the lawns bathed in soft sunshine and a pleasant breeze were impressively laid out with four ivory marquees for the sessions, with complimenting relaxing lounges, books stalls and a central area for food. But the attendance was thinner than expected. It is for the organisers to see if it was because of the choice of venue or the festival was not advertised enough.

I had planned on attending only those sessions that interested me. But there was too much to choose from. There were two sessions on education and many others on globalisation and Pakistan, feminism, socio-economic development under CPEC, national language pedagogy and its challenges and others. They all sounded too boring for my taste.

Like always, some very interesting sessions were overlapping with each other. For instance, Mohammed Hanif in conversation with Syed Kashif Raza, the author of Chaar Dervesh Aur Ek Kachhwa clashed with Shazaf Fatima Haider, writer of A Firefly in the Dark, in conversation with Afia Salam posed a dilemma. I opted for Hanif-Raza’s and was glad I did. The conversation turned out to be insightful, covering not just the novel but society itself.

Hanif asked Raza the reason for having four Iqbals in his novel and if there was a particular message in it for people. "A novel has to communicate at various levels. That’s why I have four characters with the same name. I wouldn’t like to explain the myths of these four Iqbal characters. I leave it to the readers," replied Raza. He also said that out of all of the characters in the book he feels the "closest to the Kachhwa", a confession that ensued a burst of laughter among the audience.

Before the Adab Festival, there was much curiosity in literary circles as to why there was another festival by the same team that had launched and remained associated with Karachi Literature Festival for nine years; and if the festival would be successful or not. The first Adab Festival settled all apprehensions.

To a question, Kashif said: "I barely indulge in activism. However, I exceedingly respect my activist friends who relentlessly do admirable work, which I want to do, but somehow I can’t."

There was a separate session on activism. Jibran Nasir, lawyer Faisal Siddiqi and Alia Amirali spoke on ‘Ushering in a New Era of Youth Activism: Hope or Despair’. The cynic in me stopped me from attending, for I believe that activism is to be done, not discussed or spoken about. And considering the state of the country in recent times, any mention of hope just puts me off which I think has become a big, empty cliché.

As per tradition, there were many book launches and book signings in the Adab Festival. Noman ul Haq discussed Peerzada Salman’s collection of Urdu poetry Waqt. HM Naqvi was in session with Marvi Mazhar about his new book The Selected Works of Abdullah the Cossack. Muneeza Shamsie and Maniza Naqvi, two very prominent names of Pakistani literature in English, spoke to Osama Siddique about his novel Snuffing out the Moon. Actor Sarwat Gilani, her husband Fahad Mirza and Shafat Ali, who also moderated the session, discussed journalist-turned-author Maheen Usmani’s collection of short stories The Mercurial Mr Bhutto and other stories with the writer. Tehmina Khan’s Things She Could Never Have, Imrana Maqsood’s Subah ka Nashta, Shaam ki Chai and Javed Jabbar’s What is Pakistaniyat were also among the books that were launched at the festival.

Sharif Awan of Tehzeeb Festival had a discourse regarding the contemporary state of classical music in Karachi with journalist Rafay Mahmood. Awan was, as usual, his well-spoken, informative self. However, I thought that it would be much more enjoyable and enlightening if the interviewer was as well-versed in the subject as the interviewee.

Nadeem Farooq Paracha is one writer who just cannot be ignored, regardless of whether you like him or not. He has a huge following among the youth. So, when Fasi Zaka talked to Paracha about his journey from being a popular culture commentator to writing on Pakistani history and politics, the interest was electrifying. Fasi asked him about the most consequential moment in Pakistani music. "Advent of Nazia and Zohaib," replied Paracha. "They changed the music scene as opposed to the popular belief it was Vital Signs who did so. They emerged a year after General Zia came to power, especially, after the notorious Hudood Laws. People just went wild. Soon, Raja Zafar ul Haq banned them, but Zia was smart. He invited them, lectured them on Islam, Pakistan and what he was doing. It was so sweet to see the two teenagers just silently nodding in front of him. And the ban was later lifted much to the chagrin of many of Zia’s companions."

Managed by extremely courteous volunteers and organisers, the Writer’s Lounge was abuzz with casual, frank conversations among writers, their friends and of course fans taking pictures with their favourites. Indian writer and lawyer Saif Mahmood seemed very popular among his Pakistani readers, signing books and getting photographed. In one corner Dr Arfa Syeda was busy conversing with Moneeza Hashmi. Sabyn, Maheen, Osama and Saif were posing for a group photo.

I had a rather frank discussion on the youth, Supreme Court, history, religion and the current state of affairs with Jibran Nasir and Amir Mughal (whom I always meet at festivals). This is what I love most about literature festivals -- a chance to meet so many bright minds, having vibrant discussions and forging new friendships.

Saving the best for the last: In the session ‘Dilli Jo Ek Sheher Tha’, Asif Farrukhi talked to Zehra Nigah and Saif Mahmood, author of Beloved Delhi. In Saif’s words, "I have come from Delhi to listen to Zehra apa." Returning the compliment, Zehra Nigah praised his professional acumen as a lawyer: "If Saif had been in Ghalib’s era, he would have been Sadruddin Azurda, fought Ghalib’s case and Ghalib would have won." Saif Mahmood is regarded among the top constitutional lawyers of the Indian Supreme Court with various books on legal matters to his credit. "Law is my profession and Urdu is my passion," said Saif.

In Beloved Delhi, Saif has told the story of the city from the perspective of eight classical Urdu poets. The decline of the Mughal empire and the rise of Urdu are captured through Mir, Saud, Dard, Momin, Ghalib, Zauq, Zafar and Daagh. "Urdu rules the cultural and emotional landscape of India," illuminated Saif. So why did he choose to write the book in English? "There are many books on these poets and Delhi in Urdu. This is the first that one where you get the history of the Mughal Delhi and her Urdu poets under one cover. It’s meant for those who love or are interested in Urdu but can’t access because of script or similar issues," Saif elaborated. Urdu is seeing a revival in India, he added. To which Asif Farrukhi replied: "Urdu is cool now. I teach Urdu to young students and they find it cool."

This was one session of the Adab festival that was packed to capacity, with a lot of people standing and listening. Between Zehra Nigah and Saif Mahmood, the audience was regaled with witty literary anecdotes and Urdu couplets. The marquee was echoing with two kinds of sounds: that of laughter and wah wah.

A festival for literature