Balochistan’s climate is prone to short, dry spells but in the last four years they have become increasingly frequent. The current wave in western and southern parts of the province has affected over half a million people 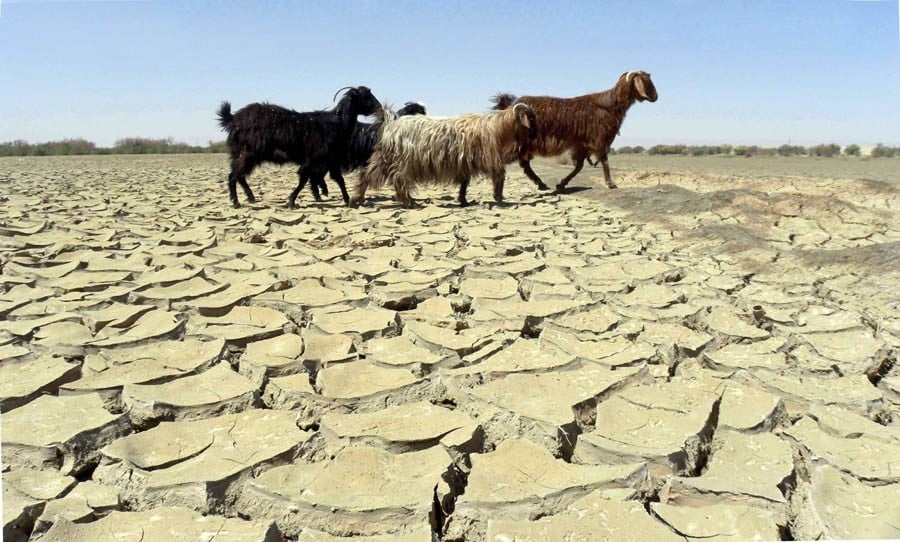 The first thing to strike on a visit to a drought-hit area is lack of water. Parched land, shrunken bodies of children facing acute malnutrition and animals reduced to bones form the picture in Nushki, Mastung and outskirts of Quetta.

I have been reporting on the drought-hit areas of Balochistan as a journalist for the last four years. Think of not having water to drink. The effects of drought are devastating. In all these years, I have observed that every year there is a cycle of events which repeats itself. First, the media highlights that a drought-like situation has emerged in a certain area of Balochistan. The government which has initially ignored the drought declares those areas as calamity-hit only after the media and public pressure mounts. The Provincial Disaster Management Authority (PDMA) sends a few trucks of supplies to the districts, using them as photo-ops for politicians. There is no proper long-term response to address the causes of drought. Then comes the next year and the cycle resumes again from the first step.

This year the debate on drought took a different shape. In the wake of the 10-year challenge that went viral on social media in the beginning of the year, people shared their current photos and compared them their photos from 10 years ago. Soon, funny and satirical memes took over, comparing different scenarios in the space of 10 years. One such comparison, not meant to be funny, depicted the environmental degradation in Balochistan. In 2009 the scenic Hanna Lake of Quetta was full of water and in 2019 the same Hanna Lake presents a picture of a barren land without any water.

In the last 20 years, Balochistan faced one long spell of drought from 1997 to 2005. Since then, it has regularly been facing short drought spells every two three years. But, in the last four years, it has become a regular feature in Balochistan crying for attention.

Drought is defined as a situation where there is shortage of water for an extended period of time. This period can be a few months and can stretch to many years. The primary cause of drought is reduction in rainfall, which is related to climate change. Therefore, the global climate change also manifests itself in the form of droughts -- like the one Balochistan is facing currently.

Haji Mumtaz is a farmer based in Mastung district in south-western Balochistan, which is affected by the current drought. His livelihood depends on the output of the crops he cultivates, which need water to be irrigated. He complains that it is becoming difficult to get water to irrigate crops. The water table is falling in Balochistan. "In the current situation, we know that it will not be very long before agriculture is completely eliminated from Balochistan," he fears.

Muhammad Baig is a resident of Nushki district. The livelihood of his family depends on the cattle he owns. The continuous spells of drought have taken their toll on his cattle. "Majority of my animals is weak and can’t produce sufficient milk. The value of my cattle has fallen sharply. If I plan to move out and sell my animals, I will get peanuts," he says.

In order to tackle the negative effects of drought, Balochistan government has to develop a two-pronged strategy. First, it needs to increase the operational capacity and effectiveness of the PDMA. Currently, the PDMA is in no way equipped with financial and technical resources to execute the daunting task of providing temporary relief to drought victims.

The symptoms of drought began to appear in the summers last year. However, this issue did not get any attention due to the elections. It took the government of Balochistan six months to admit the fact that there is a new wave of drought in Balochistan.

The next day the National Assembly passed resolutions pushing the National Disaster Management Authority (NDMA) to hold a consultative workshop on drought. The PDMA Balochistan gave a presentation in the workshop, saying Balochistan was facing a severe drought spell for the last two years which had devastated the livestock and agriculture in the province. According to the presentation, the drought has severely affected 270,258 families in 2,826 villages in Balochistan and 3.4 million livestock. Rakhshan, Naseerabad, Zhob, and Quetta divisions of Balochistan have been badly affected.

Zahid Mengal, executive director of Azat Foundation, has worked on drought mitigation for more than 10 years. He believes that preventing INGOs from working on drought mitigation in Balochistan has also contributed to worsening the problem. "The INGOs have emergency humanitarian contingency funds for drought and their work raises local awareness and directly benefits the marginal communities," he tells TNS. Many INGOs with specialisation on drought are working in other provinces of Pakistan but are barred from entering Balochistan. "The absence of INGOs in Balochistan is badly impacting vulnerable communities and their animals," Mengal claims.

Hashim Ghilzai, C ommissioner Quetta Division, tells TNS the current drought can be categorised as meteorological, hydrological as well as socio-economic. "Quetta division is badly affected [by drought] as most of the agriculturists are involved in horticulture, particularly apple," he says, adding that surveys are underway to assess the actual situation and impacts.

"To mitigate the impact of drought, the government has distributed ration and relief items and arranged free medical camps in drought-affected districts," claims the commissioner. Ghilzai further says the government has started an awareness campaign to conserve water, adopt sustainable practices in agriculture like crop rotation and replacing apple with olive, almond, pistachio, and grapes.

Moreover, the PDMA has presented a set of recommendations for drought impact mitigation in Balochistan like conducting detailed assessment of affected areas, sending lifesaving drugs for people and fodder and vaccination for animals. It has also suggested setting up of heavy water filtration plants in affected areas and initiating a livelihood programme for the affected areas.

Balochistan received heavy rainfall last week and even at the time of filing of this report. However, the water from the rain will not be too useful to counter the drought because there is no proper mechanism to store rainwater. "Heavy rainfalls destroy our crops and the water is wasted due to non-existence of small dams at proper places," says Haji Mumtaz, the Mastung farmer.

In order to tackle the negative effects of drought, Balochistan government has to develop a two-pronged strategy. First, it needs to increase the operational capacity and effectiveness of the PDMA. Currently, the PDMA is in no way equipped with financial and technical resources to execute the daunting task of providing temporary relief to drought victims. Secondly, the government needs to develop its environmental policy and work on all possible ways to mitigate the negative effects of climate change. There is no short term solution to control droughts in Balochistan.

The right to belong