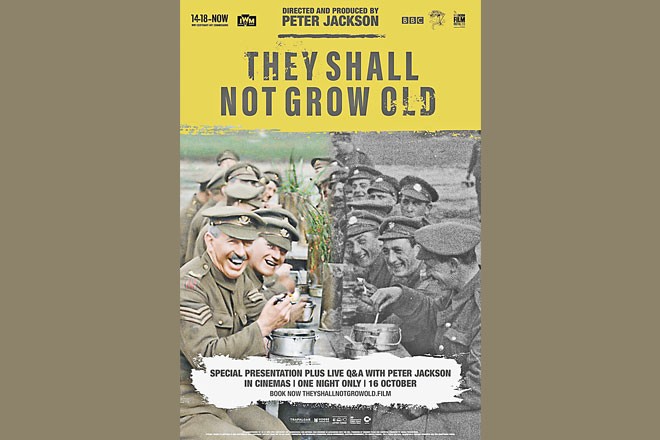 A World War I documentary in 3D with colorized archival footage that looks as new as the day it was shot. What sounds like an impossible feat becomes a riveting reality in the hands of director Peter Jackson and his New Zealand Weta crew of restoration miracle workers, led by digital VFX supervisor Wayne Stables. In They Shall Not Grow Old, the lord of The Lord of the Rings uses a treasure trove of material -- more than 600 hours worth -- from England’s Imperial War Museum to bring the Great War to vivid life.

Starting with the grainy, blurry, black-and-white newsreel clips that we’ve come to accept as historical record, Jackson expands the screen and then fills it to show off the visual wonders that are now within reach in the digital age. Dust, scratches and tears have been removed. You won’t believe your eyes. But They Shall Not Grow Old -- which takes its name from Laurence Binyon’s 1914 poem ‘For the Fallen’ -- is way more than a gimmick to sell this-just-in technology. The battle scenes emerge with a stirring urgency, along with the grim realities of life in the lice-and-rat-infested trenches. Still, it’s the faces of the British soldiers -- some as young as 14 -- that burn into your memory. Rendered with a close-up proximity that captures the lively humor and camaraderie of this band of brothers, these faces also reveal the bone-weary fatigue that comes with living in daily proximity to death. One interlude, in which the soldiers peacefully interact with the German enemy during a cease-fire, vehemently indicts the moral vacuum of war.

In place of live audio recordings, unachievable at the time, Jackson uses BBC interviews with surviving soldiers that were made after the war while memories were still fresh. Jackson doesn’t crowd the screen with names, dates, maps and charts. He lets the soldiers speak for themselves as images flash by on screen. The usually stilted film clips -- shot at 13 frames per second -- have been sped up to the contemporary standard of 24 frames per second. And the result is startling in its immediacy and intimacy. Though They Shall Not Grow Old was created to mark the centenary of WWI, Jackson does not hesitate to make it personal. He dedicates the film to own grandfather, who served with the 2nd South Wales Borderers infantry regiment from 1910 to 1919. Technology has allowed Jackson to erase the barriers of time and speak to a new generation about what war does to youth. His humane and heartbreaking film is a profound achievement.

How can you miss with a film noir starring Matthew McConaughey as a fisherman tempted by femme fatale Anne Hathaway to feed her sadistic husband to the sharks for $10 million? And, hell, the script is by Steven Knight, who did himself proud with Dirty Pretty Things and Eastern Promises and directed the formidable Locke with Tom Hardy. And yet the bats*** bonkers Serenity fails on every level, first as entertainment and then as a new-agey thumbsucker about a magical, mystical tour through the subconscious. Serenity finds new definitions of bad that almost make the damn thing worth watching for its magnificent flameout.

But almost doesn’t cut it. Serenity goes wrong in ways that are more staggeringly dull than perversely delicious. The movie just plods along as we watch McConaughey, as Iraq veteran turned fishing-boat captain Baker Dill, go tropical on Plymouth Island, a paradise off the Florida coast (the film was shot in Mauritius in the Indian Ocean). Baker and his faithful first mate, Duke (Djimon Hounsou), spend their days taking out rich tourists to hook a tuna Baker calls the "beast" or "Justice" -- pick your favorite metaphor. The thing is Baker goes nuts if any of his customers even come close to hooking the fish. Justice, that beast, belongs to him, though he can’t seem to catch him. The allegory overload is crushing.

At night, Baker enjoys relations with Constance (Diane Lane), who pays him for the privilege and begs him to find her missing cat (more metaphors). Enter Hathaway in a blonde wig as Karen, an old love with whom he fathered a son, Patrick (Rafael Sayegh), a teen who buries his love for his absent father in video games. Serenity is a movie where everyone plays at the "game" of life.

Are you catching the film’s inexorable drift into haunted psyche territory? Serenity plays like the child of Body Heat and The Sixth Sense, minus the heat and the sense. At first, Baker is reluctant to go for the bucks to kill Karen’s husband Frank, played by Jason Clarke like a hateful glare made flesh. Then the creep shows up asking about a place on the island [about little girls]. If you don’t want Baker to kill Frank instantly you will when you learn that the sleaze viciously beats Karen and the boy. What’s a father to do? Baker seems to be getting telepathic messages from his kid to save him from this predatory stepdad.

Is anyone seeing dead people? The twist in the plot is too left-field to predict, but when it comes you’ll have to suspend disbelief to the point of blindness. Serenity is unburdened by logic or a single good reason for existing. The actors look trapped, pained to utter the next line of dialogue. Young Patrick buries his head in video games, but it’s the audience that gets played. What an infuriating mess the makers of Serenity have unloaded on an unsuspecting public. It’s still only January, but Serenity has already earned a place among the year’s worst movies. Karen can keep her millions. I’d feed this misfire to the sharks free of charge.