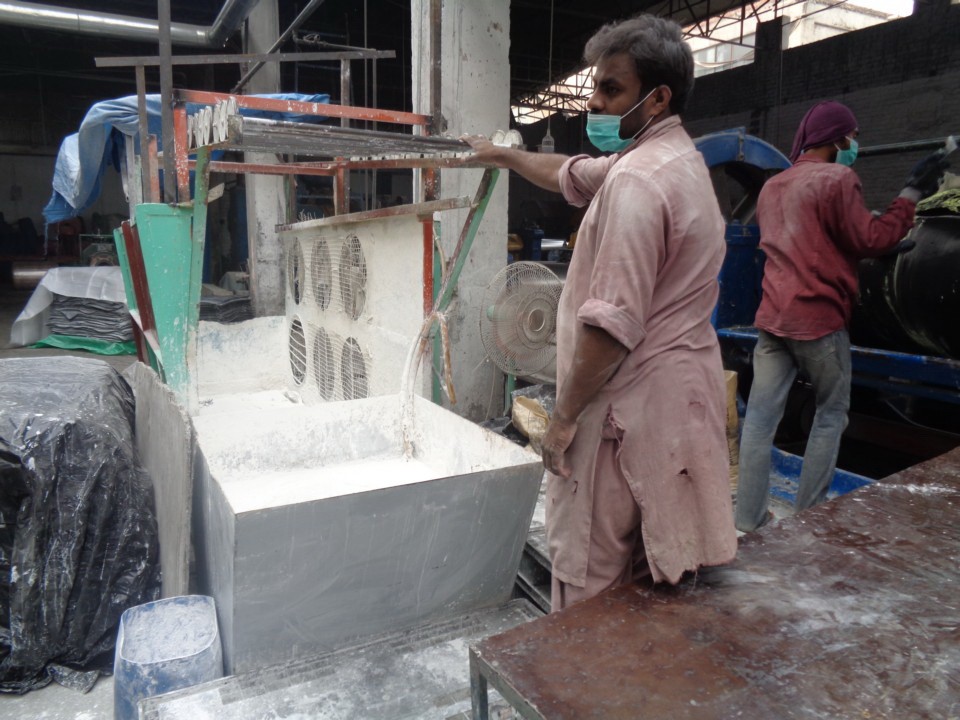 It was in the year 2014 that a disturbing news about dozens of labourers’ deaths due to exposure to silica dust sent people into a shock. Most of these deaths had taken place in and around Gujranwala where these labourers used to work at stone-crushing units. The victims had contracted a life-threatening and incurable disease called silicosis but their families had taken them to hakeems or unqualified medical practitioners. In the absence of the required medical expertise, these self-acclaimed healers diagnosed them for tuberculosis and started their treatment. The result was very much predictable; the patients expired one by one.

The disease they suffered from is called silicosis caused by inhalation of silica dust less than 5 microns in size which ultimately settled down on one’s lungs. Gradually, the lungs get fully covered with dust and start absorbing and retaining water. This condition worsens with time; the patient becomes weaker by the day and finally succumbs to this deadly disease. The rate of recovery once the disease has spread is almost none.

Such a large number of deaths due to silicosis prompted the Supreme Court of Pakistan (SCP) to take notice and order investigations into the causes. An SCP intern at that time, Usama Khawar, had approached the SCP as several village fellows of his had died due to this disease. It was soon revealed that the labourers at these quartz stone crushing units were made to work without protective gear and inhale silica dust throughout the day that remains suspended in the air. The apex court called the concerned departments and directed them to do the needful to save such deaths in future.

What followed were inspections of stone-crushing sites, launching of awareness campaigns, directives to the employers to ensure safety of workers etc. But something even more encouraging was that the debate about health and safety of workers in general took center-stage at different levels. The ensuing discussions were also focused on the existing labour inspection systems and their effectiveness and ways to improve the situation.

Almost five years down the road, these efforts have culminated into the passage of Punjab Occupational Safety & Health (POSH) Act 2019, says Arshad Mahmood, Environmental Hygienist, Saeed Ahmad Awan Center for the Improvement of Working Conditions and Environment (SAACIWCE), Labour and Human Resource Department, Punjab. He shares this law has been drafted in the light of International Labour Organisation (ILO) conventions, Punjab Labour Policy 2018, the 100 days agenda of the PTI government, SCP’s directions and so on.

He says the purpose obviously is to ensure the safety, health and welfare of people at work in the whole of Punjab and all workplaces including persons employed in informal and government sectors, except specified workplaces by government wholly or partly. This law also caters to the latest demands of the world of work which are not covered in other labour-related laws of the province.

The law passed during the first month of the year is being celebrated by the PTI government and its departments but it has to be seen whether it will make a difference or it is just old wine in a new bottle. Khalid Mahmood, Director, Labour Education Foundation (LEF) believes there was an urgent need to have such a law because labour inspections have remained suspended in the province for a decade. The inspections, he says, were banned on the pretext of protecting businesses/industries from the wrath of labour department under a political decision which compromised the interest of workers and their safety. Due to this relaxation, he thinks, the employers became headstrong and forgot that providing a safe and secure working environment was their responsibility.

The law is being celebrated by the PTI government but it has to be seen whether it will make a difference or not. Khalid Mahmood, Director, Labour Education Foundation (LEF) believes there was an urgent need to have such a law because labour inspections have remained suspended for a decade.

Mahmood says good thing about this law is that it focuses purely on health and safety issues but the problem is that it will be implemented by the same manpower of the labour department that has not delivered in the past. "Implementation will remain a challenge. So my suggestion is that a separate cadre shall be introduced and new jobs created just for this purpose."

The POSH Act 2019 defines responsibilities of employers and employees, enforcement mechanisms, punishments and fines in cases of violations, standards and checklists for different sectors that employ workforce etc. For example, it states the employer shall ensure systematic and effective identification of the existing and new hazard, ensure provision and maintenance of tools, machinery, equipment and appliances which are safe and without risks of harm, make arrangements to control and prevent physical, chemical, biological, radiological, ergonomics and psycho-social or any other hazards to the employees and other persons at the workplace. The employer is also supposed to provide protective gear to an employee, get him vaccinated periodically and get him checked for medical fitness. The workplaces are also required to have a log of injuries and accidents and reasons what leads to these so that precautionary measures can be introduced.

Similarly, the employees must ensure reasonable care for their own safety and that of other persons who may be affected by their acts or omissions at the workplace without willfully doing anything to endanger themselves or other persons. There shall be no willful misuse of any means, appliances, equipment or any other thing by employees.

Ume Laila Azhar, Executive Director (ED), HomeNet Pakistan (HNP), appreciates the passage of this law but suggests its scope be extended to the Home Based Workers (HBWs) as well who work within the four walls of their houses. She shares the labour rights activists have praised the government for covering informal sectors such as construction and agriculture under this law and including HBWs will be a great service to these poor workers. Azhar says no doubt it is difficult for labour inspectors to enter houses, so the department can engage female union council members for this purpose. "The occupational health issues of female HBWs are too serious to be ignored.

Mian Nauman Kabir, Chairman, Pakistan Industrial & Traders Association Front (PIAF), urges the need for involving all stakeholders including employers and employees in such processes. He says he has served as caretaker minister for labour in Punjab and seen labour inspectors more interested in imposing fines than bringing improvements in the working conditions of workers. Now there is need to ensure safety and health of workers and all of us must play their role. The employer must also realise that investment made on well-being of workers increases productivity at workplace and earnings for the investors, he adds.

Chaudhry Naseem Iqbal, representative of Pakistan Workers’ Federation (PWF), Punjab, tells TNS they had forwarded their recommendations to the Punjab Labour Department and stressed on training of labour inspectors on OSH because this field has been always ignored. "We are glad to know that the government has plans to form a dedicated council and OSH body to regulate safety and health related affairs at workplaces."

Arshad Mahmood of SAACIWCE says things will hopefully improve fast as the Punjab Labour Department is devising mechanisms for proper implementation of OSH law in the province and will seeks input from stakeholders as well. "Health and safety cannot be ignored; all of us are vulnerable if our workplaces are insecure." He shares that in the first phase they will develop rules and regulations for workers’ safety and health in general and later on separately for different sectors.