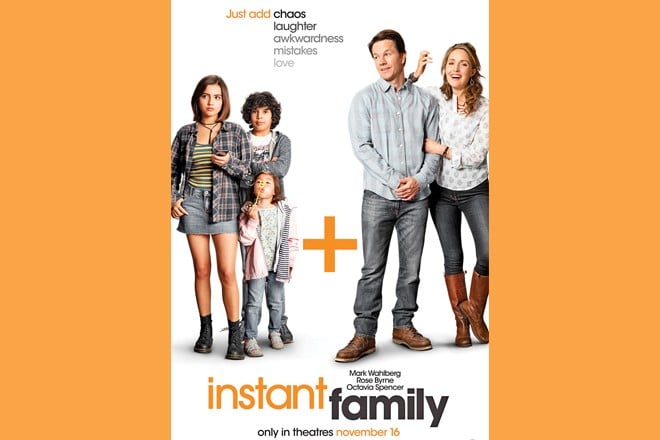 The challenges and joys of adoption fuel Instant Family, a comedy drama inspired in part by director (and co-writer) Sean Anders’ own experiences. The story revolves around married couple Pete (Mark Wahlberg) and Ellie (Rose Byrne), who - motivated by the emptiness in their lives as well as the spirit to do something good - decide to adopt a child. But when they enthusiastically end up bring home three siblings - rebellious teenager Lizzie (Isabela Moner), her sensitive younger brother Juan (Gustavo Quiroz), and difficult young sister Lita (Julianna Gamiz) - their lives (and house) soon turn upside down.

The couple experience both the difficulties and the rewards of fostering the children, as Anders brings authenticity to the underlying sentiments. Instant Family is competently made, well-acted, clearly well-intentioned, and surprisingly heart-warming, although its emotional impact isn’t quite as strong as the film would have hoped. The feel-good moments often seem forced as the movie settles for pleasing the audience instead of exploring the complexities of the conflicts it generates, keeping it from going down roads that could have been more rewarding.

To its credit though, the film is fairly successful at shedding light on the value of adoption and has some fun satirising the pitfalls of childrearing, but the project does struggle with contrivances as things go along, and the overall journey feels very predictable. Even when the movie is taking fairly obvious turns, however, its impressive cast keeps the proceedings enjoyable. Byrne is terrific as the female lead. The underused Margo Martindale, who plays Pete’s overbearing mother, steals the show whenever she is onscreen and leaves you wishing she had been given more scenes bonding with the children. And Moner brings empathy to her moody teenage character.

For the most part, Anders does a fairly good job tugging at the heartstrings while trying to navigate a complicated topic, and Instant Family certainly has some moments of mirth and revelation. But on the whole, the movie is quite predictable and too saccharine to make the best use of its affecting topic. In the end, Instant Family is sweet and pleasant but its commercial earnestness makes the film less interesting and less impactful than it could have been.

When a film features two of the most popular comedians of the moment, then it has no right to be nearly as dull as Night School is. The movie pairs Kevin Hart and Tiffany Haddish but burdens them with an unexceptional script, which fails to make the most of their comedic talents.The story revolves around a high school dropout, portrayed by Hart, who must pass the GED exam in order to get a job he desperately needs.

The protagonist is Teddy (Hart), a barbecue grill salesman, who has successful maintained the illusion of wealth while dating the beautiful and successful Lisa (Megalyn Echikunwoke) – who by all measures seems to be out of his league. But when an accident leaves him jobless, Teddy is left with no option but to get his GED so that he can potentially join a firm where his best friend (Ben Schwartz) works and keep impressing Lisa with his financial success.

When he goes back to his old high school, hoping to simply charm the principal into giving him the degree, he is dismayed to find his former classmate Stewart (Taran Killam) - who Teddy used to bully when they were young - in charge of the institute. Unable to get what he wants via shortcuts, Teddy ends up in the night school class of unorthodox teacher Carrie (Haddish), and joins a group of other misfits on their quest to get their high school qualifications.

The premise, though promising, isn’t very original, and director Malcolm D. Lee’s execution isn’t very inventive. There is the occasional turn that is interesting - like the film’s exploration of learning disabilities, for instance (although even that eventually takes an odd turn) - but for the most part the project suffers from its inability to be creative and bold.

There are times when Night School is amusing, but there are hardly any laugh-out-loud moments in the movie. Even Hart and Haddish’s comedic timing and delivery can’t keep the proceedings from becoming weary, especially when the slender plot is stretched into a film with a nearly two hour long running time. And the Hart-Haddish pairing doesn’t quite pay the dividends you’d expect; they are gifted performers, but here they are being smothered by the mediocrity of the material they have to work with. Likewise, the impressive supporting cast is mostly given stock roles and over the top personas, squandering their considerable talents.

Night School has its moments, but for the most part, the film struggles to generate laughs, mostly because the script just isn’t that funny, and for a movie that purports to be a comedy, that’s quite a big failing.