Bridal shoots are now increasingly set up outdoors, at places like the Badshahi Mosque, Lahore Fort, and the ‘Eiffel Tower’ replica in Bahria Town. But this may just be limited to high-income households 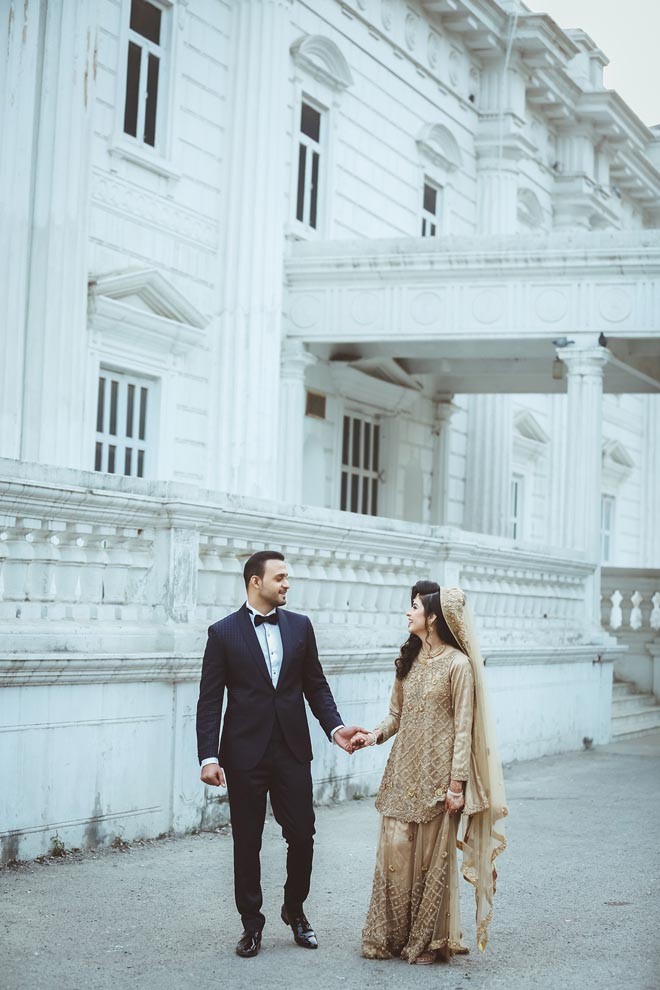 Zahra Hameed, aged 19, enjoys going through the wedding albums of her mother and her grandmother. The faded (read vintage) photographs from the 1960s show the traditional image of a subcontinental wedding, with decorated platters of henna and colourful clothing, including the mandatory turban for the groom. The photographs of her parents’ wedding, from the 1990s, are brighter, but still not very different in terms of the events they depict.

When asked if she would like a marriage ceremony similar to what she admires in the photographs, Hameed shakes her head vehemently and laughs: "No, no. That is old fashioned. I want something more exciting and glamorous. That is what weddings are all about these days. My cousin got married a year ago, and it was all so ‘happening’ through all the days on which the event unfolded."

The glamour which she is referring to includes photo shoots which now make up a very important part of almost every wedding. Couples, after all, want what they hope will be the happiest memory of their life recorded and preserved forever. But they want it preserved in a unique fashion, with carefully choreographed shoots. In Lahore, these are now increasingly set up at places like the Badshahi Mosque, Lahore Fort, ‘Eiffel Tower’ replica in Bahria Town, and outside the Quaid-e-Azam Library in Bagh-e-Jinnah.

Atif Riaz, a wedding photographer who owns his own studio in Model Town, says, "The trend of shooting on interesting locations has grown rapidly over the past few years."

He considers the Eiffel Tower replica as well as the newly built mosque in Bahria Town as his favourites. "There’s a standard fee charged by the Bahria authorities for shooting at a select five places in the town," he adds.

Riaz recalls how once he was especially asked to shoot at the Eiffel Tower, "because the couple wanted it to look as if the shoot had taken place in Paris itself."

Most shoots took place when the natural light is good and other people can be easily kept out of the frame. According to Riaz, a couple is supposed to dress up in their full wedding attire for the shoot which may take a few hours. "The reality is that people want their weddings to look different, the couples to look their best."

All this has pushed the price of wedding shoots up. Shooting on most locations costs anything from a few lac rupees to a little less than that, depending on the number of days involved and the precise requirements.

The photographs taken on locations certainly look more glamorous. Picture the ancient pillars and elephant stairs of the Lahore Fort as the setting; it would add drama to the entire shoot.

Couples posing outside the Quaid-e-Azam Library, against its graceful façade, or standing by its pillars, appear to be right out of a movie song sequence. Clearly, these are often inspired by popular Bollywood movies and magazine images, like our wedding ceremonies themselves.

In some cases, the couples are shot in different outfits, some casual, to mark the days ahead of the wedding, and then in full wedding gear.

Samreen Kamran, who got married a few months ago, says that she carefully planned her wedding months in advance, mainly with her two older sisters. "My husband, who is also my second cousin, said it was up to me to decide how things should be done. We did a photo shoot at the Bagh-e-Jinnah, not for the buildings but mainly because of the greenery and the old trees. A family friend shot it for us, and we did it rather early in the morning."

Kamran further says that the style of weddings has definitely changed over the decades, and this is natural: "Because so much about life has changed.

"Everyone now wants digital memories and good quality recordings or photographs. So, of course, this aspect [of the weddings] has become more important than in the past when photographs were not as good and weddings were simpler."

The changing pattern of weddings and the arrival on the scene of professional wedding planners, who sometimes help the families arrange all aspects of the weddings including the photo shoots, have also placed a greater divide between income groups. The wealthy go for the most elaborate shoots, sometimes spread over several days, with the couple changing into different attire at various times. As Atif Riaz puts it, "For the less affluent, a wedding follows a slightly different map: it is often conducted almost entirely within a marriage hall and with the props and seating available at it. Photographs and videos are made, of course, but the images of the Eiffel Tower, even if it is the one at Bahria Town, do not appear in them."