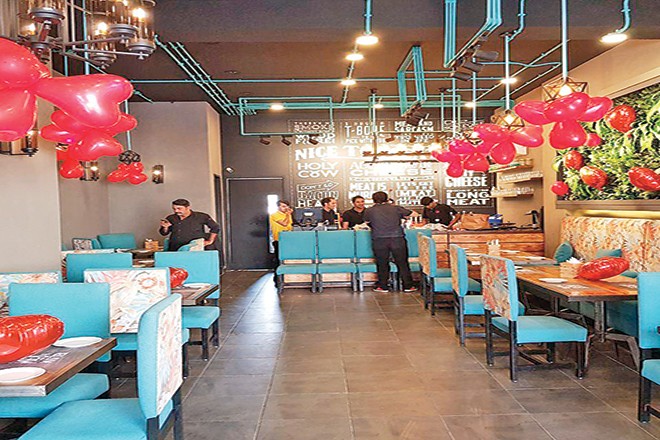 Winter is on a roll throughout the country and while it plays hide and seek in Karachi, mercury levels drop low enough to give people a chance to flaunt their winter ensembles and step out in the best of seasonal styles. It also gives the ever-gluttonous crowds an opportunity to try the best of winter foods the metropolis has to offer. However, gone are the days of the curbside Chicken Corn Soup. Instead, when there’s talk of what new winter cuisine the city has to offer, it’s the new uber-chic joints of experimentation, where food meets winter soul, that come to mind.

One such place that has fed the Karachiwala’s since a year (and has also opened up in Lahore recently) is the hearty, Meat The Cheese.

Adorned in a lively palette of yellows and blues, the restaurant is a sight for sore eyes with its play on a modern-meets-classic aesthetic that makes it quite a novelty in an otherwise quiet area of Bukhari Commercial. Inside, the quaint eatery turns into an even-bigger respite with the aromas of gastronomic delights managing to grip the clientele. However, nothing makes it more palpable than the vision of gooey melting cheese being added onto various dishes that you see being served as you walk in.

Relatively full for a weekday evening, the restaurant brimmed with life as we were escorted to our seats amidst the usual hustle bustle that any trending eatery would like to flaunt. Adding to the snug experience of the evening was, of course, what one comes here for - the food. Boasting a myriad of cheeses that an average Pakistani has perhaps never seen or heard of in their lives, the list of options available are more than enough to tempt anyone who lives for the word ‘cheese.’

Ordering from a rather long and quirky menu which ranged from poultry to French-style beef cuts, we chose to go for a mix from their new winter ‘Celebrations’ menu as well as their classics that included Cheesy Chick on a Stick and Cheesy Mushroom Fries as the appetizers, Tender Loving Loin, Our Deep Fried Pride, and the Smash Burger as the mains, and The Melting Point dessert to end off the night.

Starting off with the appetizers, both, the Cheesy Chick on a Stick and Cheesy Mushroom Fries hit the right notes with their hearty flavours. While the former stuck to a more Mediterranean Souvlaki-style grilled chicken mixed with a fusion of cheese, the latter played with the idea of an Italian-inspired mushroom sauce mixed with truffle oil over a gracious bed of fries.

Although they had already won us over at the word ‘cheese fries,’ the ménage of mushrooms and potatoes with truffle oil did the trick for us. However, if you want to have a bite without feeling too guilty of overdosing on cheese, then the former should be your best bet.

Over to the main courses, the literal heartbeat inducing dishes proved that they truly are worth the celebration they boasted. It also verified our opinions that surely, these plates are not meant for just one person.

Out of the three main courses we ordered, the Tender Loving Loin and the Smash Burger proved their prowess the most. While the ‘Our Deep Fried Pride’ remains the restaurant’s signature dish that surprisingly no other eatery has been able to come close to, the other two mains were just a notch higher in their delicate amalgamation (and experimentation) of tastes. Can one expect a patty exclusively made of cheese within a burger? Well, now in a bout of ‘now we’ve seen everything’, we can.

Amidst the attempt to devour all that was present on the table - a task, which one could admit is an Everest situation - we were also offered an assortment of their signature drinks, which included a home-brewed iced tea, a mint Margarita, and a Mocha Frappuccino to quench our thirst. Although all three are standard fare around the country, one would place their bets on the Frappuccino as a strong contender to many others being served nationwide.

Ending the meal within a span of close to two hours given the major mass of it all, we chose to go for a lighter dessert (if there’s such a thing), with The Melting Point. While the name may not give it away, the dessert is a baked lava cake filled with a rather luscious concoction of chocolate in the middle. Hands down, the last dish of the experience made our night with just the soul it served through it.

All in all, while Meat the Cheese has always proven that it can be a restaurant that isn’t just a one-off novelty, the new Celebrations Menu has only made that claim stronger. So, if a hearty meal for the winter night is in your itinerary, look no further than this big cheese.