Is it all worth it?

Does all extravaganza, obnoxious show of wealth guarantee happiness, togetherness -- elements marriages are supposed to bring and weddings are a celebration of? 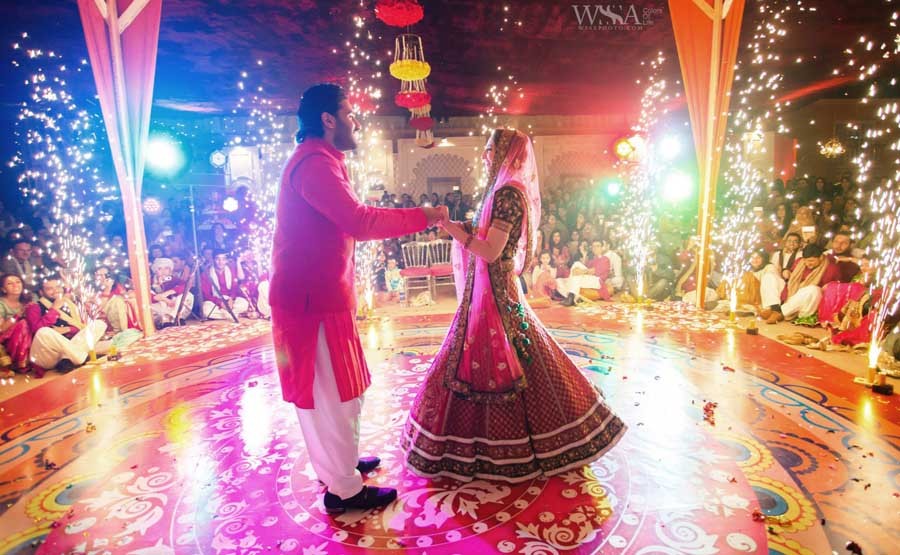 I detest marriages but I love weddings. I have always loved them. They are fun, song and dance, vibrant and festive. These days, admittedly, a lot more than they used to be.

Today, weddings are nothing but elaborate productions. Every season, there’s one wedding that stands out as the wedding of the decade or even the century. But the next, there’s another that leaves the previous way behind and wins the title/s. Usually, they are spread over weeks comprising of at least six big events, dholkis and GTs not counting. And this is a regular wedding. The big ones can go on for at least a month. In our part of the world, weddings seem to make the world go round.

The mega production involves venues, event planner, fashion designer, jeweller, flower vendors, food caterers, bar tenders, decorators, printers, dance choreographer, event photographer, portrait photographers (yes, they have to be different as the two are different fields and they are specialists for each category) at different points of time. Oh I forgot one of the most important elements of weddings today: dars. So dars woman. And these days, the social media management team. A wedding can happen without nikah, perhaps, but certainly not without a hashtag. The pictures must be placed at various portals in order to go viral. How else would the world know you got married?

Understandably, it makes life much easier with an event planner. One stop-shop that takes the headache of running around town for venue bookings, music system and DJ caterers, bar tenders, flower vendors, decorators and valet service. The family is only left with invites distribution, ordering outfits, hair and make-up appointments and jewellery. So, what’s the problem? Apparently, nothing. It all sounds perfect. Seemingly, the wedding business provides employment opportunities to many, many individuals. Many household kitchens run on it. Wheels of economy keep churning, even in times of highest recession. Great.

To me, and many more, the issue is ethical and aesthetic. All this has led weddings to become a social one-upmanship. And it has gone from vulgar to offensive. Recently, I went to a marathon wedding that was literally spread over about a month. It commenced with a boozy lunch, then countless dholkis which were actually dance choreography sessions; dinners; qawwali; gana, nikah, mayun, mehndi lagayee, slumber party, party, mehndi, wedding, valima, and the wrapping up brunch.

Bride and groom outfits for each event are ordered at various designers. Millions are just spent on this exercise. Family members and guests also go in a tizzy organising outfits for each day. It’s a spectacle. Of course, for designers wedding season is the craziest with bookings in months advance. Even bazaars see a great humdrum of activity where karigars and tailors put in extra hours.

Another wedding last year featured just flowers worth Rs4 million. And it didn’t even add a pleasing touch to the environment; it look like a wholesale flower market instead of the intended, sophisticated venue. Another mehndi featured two bars, together equal to about a football field size. This is another trend now. People not only avoid going to dry events but also viciously complain about them for not serving alcohol.

We surely have taken weddings very seriously, to the level of the famed, grand Russian circus. Isn’t it time that we took a step back and cast a conscientious, critical look at the whole scene?

Then there is food. I have been to weddings where events were catered by top notch restaurants, forget five star hotels. The latter is passé unless the venue itself is a five star hotel. (To be honest five star hotels food sucks. Apart from security nightmare, food is another reason weddings don’t in hotels.) Food tasting begins months before finalising a caterer. In fact, food tasting is yet another event for the close family and friends in a wedding. It is made sure that no two events of the wedding have same or similar menu.

Trust me I am no social reformer or in favour of bans as we witnessed in Punjab on number of dishes and timing. I don’t condone government or state or any authority’s intervention in private affairs. The sense of balance, responsibility -- or any kind of sense -- have to come from within. But this competition to outdo each other is not taking us anywhere as a society. It is just making the cost of weddings skyrocket beyond the reach of a family that sustains on jobs or small businesses.

More importantly, it has turned a beautiful, soulful personal experience into an obnoxious competition of who’s-got-more-wealth robbing it of its purpose and essence. There is no end to it.

Not that everyone is a part of this vicious rat race. In this day and age, I have attended weddings that were simply decorated, lasted just a day or two and remained a small, personal affair instead of a mega production. But such weddings are few and far between. Interestingly, such weddings happened on the pressure of either the marrying couple or in families that are highly enlightened, conscientious and socially conscious. However, such affairs felt more blessed, more elegant as one returned home happy.

I find myself at a crossroad where the old merges with the emerging, breathes its last and a new era is born -- I belong to the Transition Generation, Gen T, as I call it. I still remember the days when life was simple and weddings were a personal, simpler and elegant affair. Of course, preparations would begin months ahead involving close family and friends. Different members of the family would take responsibility of various chores. Women would arrange clothes, jewellery, mehndi and hair and make-up. Bridal outfit was often prepared at home after getting embellishments done from old family karigars.

Men would look after food and catering side, usually from family bawarchis who took the job personally. That included serving and distribution of leftover food, too. Venue would be the home or some relative’s house that had the capacity to accommodate guests. Parents would go for furniture shopping. Close relatives and friends would take it upon themselves to contribute electrical appliances and at times furniture and even cash to the expenses.

Wedding events would start with Quran khawani followed by milad. After milad the ritual of ubtan lagayee was observed. This was the official announcement that the bride would wear yellow dress, apply herbal concoctions for roop and wouldn’t leave the house for a period of time, usually ranging from five to ten days prior to the wedding.

Also read: Millenials and us

During this period, every day guests would keep pouring offering congratulations and bringing gifts, in the evening friends and relatives gathered to sing traditional weddings on dholak. The girls who had good voices, and could play dholak were always in great demand. Close relatives would take it upon themselves to organise food every day. It was so beautiful. Weddings were the occasion when the whole family, keeping difference aside, got together to celebrate the union.

We surely have taken weddings very seriously, to the level of the famed, grand Russian circus. Isn’t it time that we took a step back and cast a conscientious, critical look at the whole scene? Is it all worth it? Does all extravaganza, obnoxious show of wealth guarantee happiness, togetherness -- elements marriages are supposed to bring and weddings are a celebration of?

Is it all worth it?