Wedding is another season 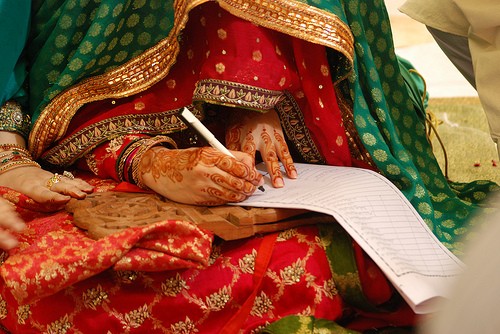 In a country that has few venues for communal entertainment, it is but natural for weddings to have an outsized importance. No karaoke culture? There are the songs sung around a dholak. No clubs? Dance (or at least watch people dancing) at a mehndi. No bars where you can banter with potential romantic interests? We will give you the joota chhupaai. There is free food, whole families getting together, people dressed to the nines, increasingly tasteful wedding décor, what’s not to like about weddings in Pakistan? The hysteria around coupledom, for one, and the sheer hypocrisy that underscores this hysteria.

Many years ago I read an article by an American woman who had moved to Pakistan after marriage. A wedding procession passing by her window moved her to write a paean to the beauty of wedding celebrations in Pakistan, urging her to wax lyrical on the strength and long lastingness of Pakistani marriages which felt to her so much more romantic than those in the West whose longevity was always in doubt. In Pakistan, she asserted, marriages were forever and the ghori and the band, baaja baraat represented something worthwhile and eternal. Ironically, growing up I had always viewed western weddings as far more authentic than desi ones: small and intimate as they were, less gaudy and focused on the bride and groom rather than extended family members and distant family friends. Experience allowed me to grasp that much of the wedding culture in the West was equally steeped in external show and patriarchy, just of a different variety. Wedding dresses and event spaces, décor and invites, proposal videos where girls go berserk when their boyfriends pop the question, the ‘giving away’ of the bride by the father and the bouquet toss showcase aspects of western society just as cringe worthy as any less ‘civilized’ one.

Foreigners can be forgiven the reductive romanticising of a culture they essentially view from the outside, but even among Pakistanis this uncritical view of our weddings - consummate symbols of a society whose foundational basis is hypocrisy - is fairly common. What every Pakistani learns growing up is the essential chasm between what one says and what one does to survive the constant scrutiny of family members: afternoons at friends’ places are used as subterfuge for dates, religious sceptics learn to keep a lid on their thoughts while they play along with Friday prayers and Ramazan fasts, vicious gossip about other people’s affairs is passed off as concern. All this extends to the wedding event itself, a grand show of festivity and cheer that often masks stark disparities and marginalization. To date the bride’s side is meant to shoulder a disproportionate burden of the events’ finances. The jahez of today may not come in the form of blatant demands for sofas and cars (though even that is far more common than many believe), but the pressure of gift-giving still rests on the shoulders of the bride’s family. No such reciprocal expectation exists for the groom’s side. In fact, prospective brides are told to keep their expectations in check even over the one aspect where the boy’s family has to spend money on the girl: the walima dress and/or the engagement ring. My frame of reference is Punjabi weddings - the bride price in Pakistan’s northern areas is a far more progressive ideal in comparison.

When weddings are the focal point, people who stand outside the institution of marriage find little foothold in the social life of a culture. If all socializing revolves around coupledom, then the uncoupled are oddities rarely at the centre of such a massive celebration of being.

I have seen many weddings where girls were pressured or coerced into marrying men they did not like or did not know, but you would never be able to tell from the wedding celebration. The size and gusto of the wedding has little to do with the love or lack thereof in the marriage that ensues. In fact, if any love exists between the bride and groom on their wedding day it is imperative upon most middle-class families to try and hide it in the name of family dignity and honour.

Also read: Is it all worth it?

When weddings are the focal point, people who stand outside the institution of marriage find little foothold in the social life of a culture. If all socializing revolves around coupledom, then the uncoupled are oddities rarely at the centre of such a massive celebration of being. Graduation parties are beginning to pick up in affluent households, but for most families the only time spending money and celebrating a child is an ungrudging joy is when they come and join the mainstream of family and procreation.

Wedding is another season