Vienna waits for you 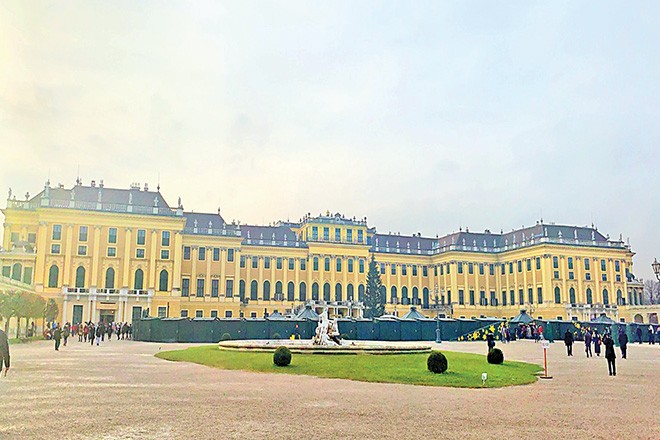 For someone who grew up listening to Bill Joey’s ‘Vienna’, finally being able to visit the city felt like a dream come true. It’s a scary experience, visiting a place that has been on your list for long or one that you’ve read and researched a lot about; scary because you’re always afraid that it may not live up to expectations. I was particularly scared because every time I mentioned my Vienna plans for winter break to anyone, they would think I’m crazy. "It is going to be immensely cold! Are you insane," I would get to hear. But if there is one thing I’ve learnt in my life so far, it is that we end up regretting things we don’t do more than the ones we do. And so I took the plunge and got on a plane to Austria’s capital, Vienna, the city by the Danube River.

Vienna in winter, particularly in December, is a sight for sore eyes. Christmas lights make everything beautiful. And around this time, the beauty of Vienna takes on a different tone. Strings of Christmas lights adorn every conceivable street; residents and tourists alike meander through Christmas market stalls, hunting for the prettiest mugs to take home. Everything is slightly tinted in purple and blue, with warm lights reminding you every moment that Christmas is coming. The Christmas markets in Vienna are some of the best in all of Europe and it’s no surprise that my friend and I walked to the biggest Christmas market in Vienna right after we checked in at our hotel in the city center. It is always wise to stay central. One can find decent accommodation (Airbnb or hotels) for 75-200 Euros a night in the city center.

Brightly lit, festive and absolutely stunning, the Christmas markets convinced us that we had made the right choice. The next morning, we started our day by touring the Schonbrunn Palace. Our Uber driver told us there is nothing like the Schonbrunn in Vienna and rightly so. Schonbrunn Palace was the main summer residence of the Habsburg rulers; it is located in Hietzing, Vienna. The 1,441-room Baroque palace is one of the most important architectural, cultural, and historical monuments in Vienna. Since the mid-1950s it has been a major tourist attraction. The palace is majestic with so much history and beauty stored in it that one could spend hours marveling at the stories and the most significant Austrian artworks at the palace.

For those who like wildlife and nature, the Schonbrunn Zoo is just nearby. It’s one of the oldest operating zoos in the world and visitors get to meet animals as diverse as pandas and flamingos here.

One of the reasons why I keep going back to Europe is that I love the art, history and culture in Europe. To fill my appetite for art, my friend and I visited the Albertina Museum. We got lucky because the museum was hosting a special exhibition of Claude Monet’s work from across the world. The Albertina Museum is gorgeous in its own - blush pink walls and white windowpanes - it feels like it is out of those fairytale stories. Some of the most notable works at the Albertina include the Study for the Last Supper by Leonardo da Vinci, The Girl with the Marmot by Jean-Honore Fragonard and House Among the Roses by Claude Monet.

Just steps away from the Albertina is the Austrian National Library, originally referred to as the Osterreichische Nationalbibliothek. This is the largest library in Austria, with more than 12 million items in its various collections. The library is located in the Neue Burg Wing of the Hofburg in the center of Vienna. Since 2005, some of the collections have been relocated within the baroque structure of the Palais Mollard-Clary.

I had heard a lot about it but it definitely exceeded my expectations. Pictures don’t do justice to the place. It’s so stunning that the eyes stop believing as well and one can’t help but stare at the walls, the ceiling and the books stored in main hall. Undeniably, it is one of the most stunning libraries in the world.

You can’t be in Vienna and not visit the cathedrals and churches. We picked St Stephen’s Cathedral and St Peter’s Church to visit. St Stephen’s Cathedral is one of Vienna’s most famous and beautifully intricate landmarks that survived the World War II. The exterior of the cathedral has limestone walls, adorned with intricately detailed statues and is an amalgamation of Romanesque and Gothic architectural styles. On the inside, ornate Gothic columns support the roof and tell stories of the Saints, with countless solemn faces peering out of the walls.

Just a three-minute walk from there is the St. Peter’s Church, locally known as the Peterskirche. Probably the oldest church in Vienna that dates back to the second half of the fourth century, Peterskirche has a typical exterior, which may seem like any other church with a dome but the interior stands out. The ornamental ceiling, perfect lighting and stunning artwork makes the church look absolutely breathtaking.

There is so much more in Vienna that a travelogue simply can’t do justice to. The city is quintessential Europe. It feels more typically European than even Paris. The car-free city center, the dining and drinking traditions, the emphasis on art and fashion, beautiful churches in the middle of the city, the sheer concentration of stunning architecture within walking distance, all carefully arranged to form an impressive 360 view of Vienna’s impressive history make it very European.

Hungarian writer Sandor Marai was right when describing this place. "Vienna wasn’t just a city; it was a tone that either one carries forever in one’s soul or one does not."
I think I will carry it in my soul forever.

Vienna waits for you