As scores of makeshift shops were gutted at Sabzi Mandi, as part of the CDGL’s anti- encroachment drive, it left the poor vendors to cry foul 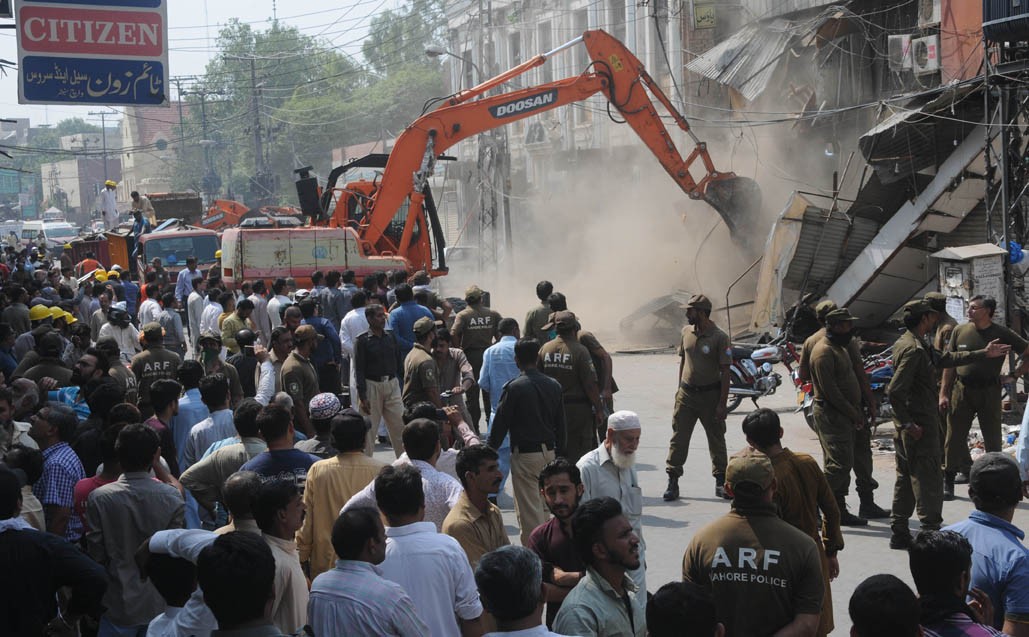 There’s an air of mourning around Sabzi Mandi, near Chungi, Multan Road, following the death of a poor, old vendor last week.

Reportedly, the vendor, named Muhammad Sharif, had a cardiac arrest in the middle of a heated argument with the staff of the market committee who were there to raze the makeshift shops as part of the civil administration’s anti-encroachment drive.

According to Malik Sharafat, President, Sabzi Mandi, the old vendor "was [seen] shouting at them [the committee staff], and telling them how he had paid them thousands of rupees to allow his little business to run. But they wouldn’t listen. He even offered them more money."

With the help of police personnel, the city district government of Lahore (CDGL) staff eventually bulldozed 45 temporary shops and 35 rehris (push carts). Left with no other option, the traders as well as vendors resorted to physical force, trying to stop the operation. It grew into a bigger clash. Unfortunately, the 65-year-old Sharif could not bear it, and lost his life.

Sharafat alleges that the CDGL launched the operation without any prior notice. The police tortured the vendors and shopkeepers who tried to create any hindrances in the operation. "Everything was either destroyed or looted by the policemen and city district government staff who were once involved in constructing these shops and collecting heavy bribes in return. That is the major reason why the shopkeepers and vendors reacted strongly."

The administration had to engage dozens of policemen to bring the situation under control.

The anti-encroachment campaign was started in the provincial capital on October 1, 2018. Till date, the district government claims to have retrieved more than 90,000 kanals of land from the encroachers. Operations have been similarly conducted in Shah Alam Market, Johar Town; Moon Market, Allama Iqbal Town; Ferozepur Road, Anarkali, Lytton Road, Dharampura Bazaar, Harbanspura, Dhani Ram Road, Ichhra Main Bazaar, and many other places.

In Shah Alam Market, Harbanspura, Tajpura, the Walled City, Sabzi Mandi near Chungi, Multan Road, and some other areas, the city district government faced strong resistance from shopkeepers. It left many injured. More than 450 FIRs were registered against the protestors, many of whom have also been apprehended.

Furthermore, around 9,000 kanals of land has been evacuated from the encroachers. As Deputy Commissioner Imran Maqbool tells TNS, the "anti-encroachment campaign shall not stop till it reaches its logical conclusion.

"The perception of not giving prior notice is a complete farce," he declares. "We not only serve prior notice but also mark the area that has been occupied illegally. The illegal act of grabbing state property or encroachment is not acceptable and shall be dealt with with an iron hand."

The All Pakistan Anjuman-e-Tajran (APAJ) sees the anti-encroachment drive as a fair exercise gone wrong. It is creating panic among the traders and vendors, they claim.

"Several requests sent to the administration were turned down to take the leadership of every market on board prior to any such action. The affected people must be given a chance to not only shift their goods but also to find out an alternative to keep their businesses running."

To quote Sharafat, "Several requests sent to the administration were turned down to take the leadership of every market on board prior to any such action. The affected people must be given a chance to not only shift their goods but also to find out an alternative to keep their businesses running."

He blames the authorities for destroying the livelihood of thousands of families: "These are the same people who helped them capture state land in the past and received millions of rupees as bribes.

"We demand that the officials involved in encouraging and establishing this illegal business be put behind the bars first."

He also speaks of the "10,000 families whose livelihood has been usurped, thanks to the campaign, whereas not a single opportunity has been created by the government to re-employ them or restart their business activity."

On the other hand, the heavy machinery being used to demolish the illegally set up shops has damaged the adjacent buildings many of which were in poor condition already and could collapse anytime.

Deputy Commissioner Imran Maqbool rejects Malik Sharafat’s allegations as baseless: "We haven’t received a single such complaint during the whole anti-encroachment campaign. The machinery was not used to demolish any buildings that could damage its adjoining structures. Instead, labour was employed for the purpose."

The DC also speaks of starting departmental investigations against those who were directly or indirectly involved or supporting the process of encroachment: "The vendors as well as the traders’ associations willing to help us identify and reach the culprits are welcome."

The anti-encroachment team is assisted by a "co-team" which is led by the Lahore Development Authority (LDA) and is directed against the land mafia occupying different lands on which houses and shops were constructed.

A source in LDA confirms reclaiming around 300 kanals and 12 marlas from land grabbers. The land is worth Rs13.5 billion. Arrests have been made, and FIRs lodged in the process. Operation against Mansha Bomb is a case in point.

Chairman Industrial and Traders Front (PIAF), Mian Nauman Kabir, is in favour of the anti- encroachment drive across the provincial capital. He claims that all trade associations in the city support the campaign, despite the fact that the one-sided operation against shopkeepers and vendors is adding to the shopkeepers’ woes.

"There are many shops and some buildings in different markets which have been sold to buyers over a period of time," he says. "The current owner possesses official documents [of ownership]."

Additionally, they have been paying the commercialisation fee and other taxes against these properties. Water metres, electricity and gas metres are registered in their name. "This means more than one department is involved in the entire encroachment game, and received benefits," he alleges.

"If the government or the concerned authority had punished those involved in establishing these encroachments, there would be no protests on such a massive scale."