I’ve come to the conclusion that the 10-year challenge needs a filter, or I’m going to have to take another sabbatical from social media. Either way, ‘challenging’ times indeed! 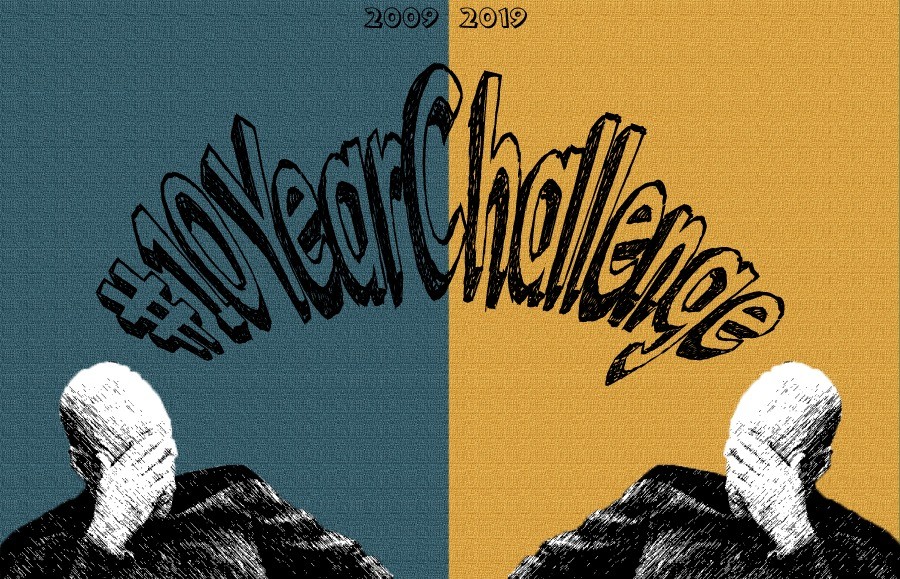 It’s that time of the year folks! A few weeks into the New Year 2019, spirits are running high for those who have pledged to grab new opportunities by the horn, and ride the wave all the way to utopia itself. But for others, including myself, well, we have all come to the conclusion that our destinies pretty much have a similar script written along the lines of that ‘bandersnatch’ episode from the critically acclaimed British sci-fi anthology series, Black Mirror. (You know, the one in which the protagonist realises that someone else -- your pudgy finger! -- is in charge of all his actions.)

Though confusing at first, I must admit the whole idea kind of really grows on you in time. Furthermore, I consider myself a saint now. Why, because Satan is currently binge-watching bandersnatch and in charge of all my actions. It’s a very refreshing lifestyle, if I’m being too honest.

Getting back to the matter at hand -- hashtag 10YearChallenge. In essence, you simply post two images: either side by side, or whichever way you want it to look aesthetically pleasing, I guess. The purpose of all of that effort is for you to tell the world on social media how much you have changed over the course of the past decade. Because if the Internet has taught us anything since its inception, it is that the social media is a platform where each and every individual has the freedom to express themselves without facing any criticism or abuse of any sort. If you failed to spot the irony, then stop reading this further. But for those who are with me, let’s continue this amicable discussion.

Firstly, I must give credit where credit is due. It’s not easy to go 10 years back in time and have the courage to post whatsoever you used to look like. For example, if I was to go 10 years back in time the first thing I would do is delete my Facebook account. I cannot even begin to narrate the countless hours I have spent changing my privacy settings from Friends to Only Me, of 99.99 percent of my posts. You might label this as a sign of low self-esteem, but I claim it to be a blessing on humanity itself. My profile pictures from 10 years ago are not only a shrieking call to help, but also therapy. Some of the things I used to upload could easily be used to start a Go Fund Me Campaign in the present; that is the level of desperate help I required in those olden days. My 10YearChallenge, hence, would be an actual challenge in trying to figure out how the hell I was allowed to become a functioning member of society in the year 2009.

Secondly, I’m also a bit envious. Not of the clearly commendable transformations so many people have gone over since the past 10 years, but rather of their coping mechanisms. Let me elaborate. You know how you share something on social media thinking it’s cool, but in seconds your post is attacked by a pack of wolves (who also happen to be your best friends) relishing to shred your likes and interests to the point of oblivion.

I struggle to wrap my head around the fact as to how on earth are people so confident about giving even more ammunition to their dearly beloved. I haven’t even gotten around to the abuse one might be subjected to by random trolls -- because, you know, what travels faster than light: a meme. And I have absolute faith in the fact that my 10 Year Challenge would become an album of memes and spread like wildfire.

Also, a special shoutout to the #10YearChallenge meme of still being broke 10 years onwards. That is Internet at its finest, and also something I can relate to on a personal level.

Nevertheless, I was still enjoying most of the #10YearChallenge posts until I came across the ones of some places on our planet looking all lush and green in the year 2009, but at present resembling a desolate land bereft of any flourishing life. Word of advice to my friends: nothing can sucker punch you like your untamed social media timelines, where one second you’re shaking with laughter, enjoying silly cats and dog videos, and the next second you’re hit with the "Wake Up, the Planet is Dying" posts. For Heaven’s sake, Zuckerberg, we aren’t all robots; context is essential for us living creatures!

All in all, I’ve come to the conclusion that the 10-year challenge needs a filter, or I’m going to have to take another sabbatical from social media. Either way, ‘challenging’ times indeed!