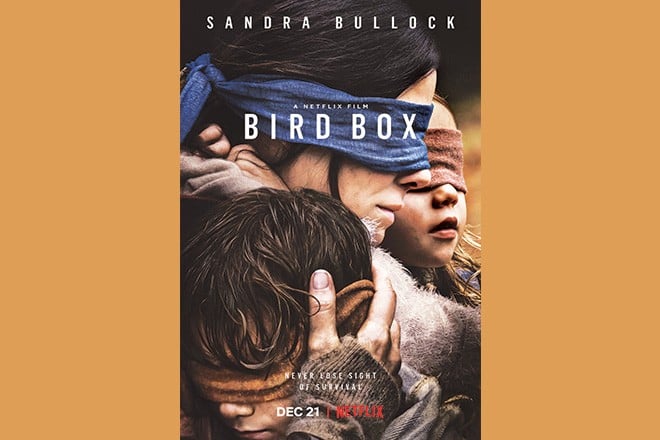 Bird Box, a Netflix movie, borrows heavily from several of its predecessors and seems particularly fond of genre tropes; Peppermint serves as a reminder that Jennifer Garner makes an impressive action hero.

Hollywood’s department of post-apocalyptic thrillers currently seems very intrigued by the human senses. Just a few months after A Quiet Place took us to a dystopian world where making a sound would lead to death, we now have Bird Box, where seeing equals suicide. Unlike A Quiet Place though, Bird Box is neither exciting nor compelling.

With a premise that is somewhat akin to the aforementioned John Krasinski film as well as the M. Night Shyamalan thriller The Happening, as the film begins, a woman (Sandra Bullock) directs two children - a boy (Julian Edwards) and a girl (Vivien Lyra Blair) - to do exactly as she says and not to take off their blindfolds under any circumstances, before setting out on a dangerous journey down a river in a boat.

A flashback swiftly takes us back five years, where we find out that mysterious, supernatural entities are causing people who see them to commit suicide. A ragtag group of survivors - among them, a heroic Trevante Rhodes, a grumpy John Malkovich, a weary Jacki Weaver, and even Machine Gun Kelly for some reason - eventually find themselves holed up in a house, trying to figure out what is going on and how best to navigate the impending doom.

We go back and forth between the river journey and the flashbacks, but swinging between the two timelines takes away whatever little suspense the story possesses. The writers never coherently detail (or stick to) the rules of their apocalypse, nor do they seem very adept at creating three dimensional individuals, settling instead for using archetypical characters to populate their tale. The always bankable Sandra Bullock isn’t given much to work with here, while the terrific Sarah Paulson is completely wasted in her small role; the biggest mystery the film leaves you with is how the project even managed to attract such an impressive cast.

While dystopian dramas often explore the human condition or some deeper underlying meaning, Susanne Bier doesn’t bother with any such effort. Instead she throws around a couple of vague thematic elements here and there, and leaves viewers with the errand of imagining some allegorical depth in the shallow narrative. The film might be trying to say something about the powers of motherhood and there is perhaps a vague look at mental health, although, without giving too much away, the movie’s portrayal of mental illness is either ignorantly dangerous or offensively clumsy, or quite possibly both.

As it stands, Bird Box is a little too bird-brained for its own good. The filmmakers could have easily spun the story a different way, but the direction they decided to take is so tepid and hackneyed that it simply isn’t effective as a thriller and just ends up squandering a fairly decent premise.

Tagline: The system failed. She won’t.

Hell hath no fury like a woman whose family has been murdered, at least according to Peppermint, an action thriller that finds a bereaved woman seeking revenge for the assassination of her family.

Jennifer Garner portrays the protagonist Riley North, who has a young daughter, Carly (Cailey Fleming), with her husband Chris (Jeff Hephner). When the financially struggling Chris agrees to be part of a robbery, he incurs the wrath of the intended target, powerful drug lord Diego Garcia (Juan Pablo Raba), who orders his men to make an example of the would-be thief. Chris and Carly are gunned down in a drive-by shooting, while a severely wounded Riley ultimately survives.

When the corrupt justice system fails to punish the men who killed her family, Riley takes matters into her own hands and sets out for revenge against the cartel that destroyed her life.

Things unfold exactly how you’d imagine. There is no subtlety, no complexity, no nuance. The movie basically plays out like a comic book vigilante has been dropped into a video game, which probably wouldn’t be as big a disappointment had the proceedings been original in any way. You are continuously reminded of past projects - John Wick, The Punisher, and director Pierre Morel’s own Taken - only this time the (anti)hero just happens to be female.

The film could have still delivered an exciting action outing despite the unoriginality of its premise had the filmmakers bothered to give their characters some depth and detail. There is precious little we know about Riley outside her tragic ordeal, and there is next to nothing we know about the perpetrators (who, problematically, are mostly Latino); she is basically there to do the asskicking, and they are there to receive brutal endings.

The main problem here is the lazy screenwriting which refuses to come up with interesting layers for the characters to explore. Plus Riley is put in such a bleak position that her actions don’t deliver the exhilarating effect that is generally intended with such vigilante thrillers.

To her credit, Jennifer Garner brings both strength and vulnerability to her role, and holds her own throughout the proceedings. Peppermint serves as a reminder that the actress makes an impressive action hero, but ultimately just leaves you wishing her talents have been put to use in a better action movie.