Who's afraid of the 18th amendment?

Is the talk about roll back of 18th amendment a turf war between institutions? Who will address this tension between the centre and provinces -- parliament or judiciary? 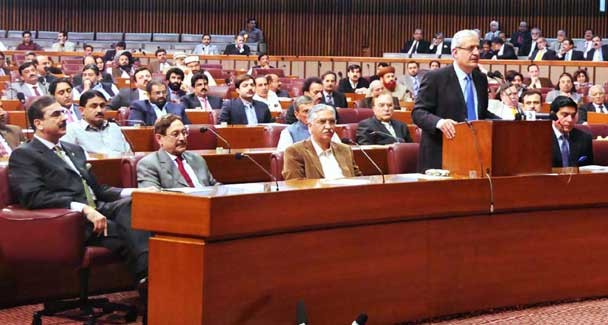 The 18th amendment is under discussion again. But when was it not, starting from the day it was passed in 2010. Though the initial reaction to the transformative scope of this one amendment was euphoric, in about a year’s time problems of implementation started raising their head as they should.

Actually, the discussion began too soon when the newly empowered judiciary did not take too kindly to the oversight mechanism proposed in the amendment regarding appointment of judges to superior courts. It almost threatened to strike it down. This resulted in the 19th amendment to the Constitution of Pakistan that reduced the strength of non-judges in the judicial commission and limited the scope of review by the parliamentary committee.

There was another amendment in 2015 that rendered fair trial as envisaged in the 18th amendment impossible. This was the 21st amendment that established speedy trial military courts for certain specific offences like terrorism. This one had a sunset clause of two years. As the federal government must now mend fences with the opposition parties to extend this ‘sunset clause’ a second time, and as some legislators privately say they wouldn’t sign it because it hasn’t served the purpose, this is when the 18th amendment is referred to again, even if indirectly.

This also brings to mind some Islamic provisions brought by dictator Gen. Ziaul Haq -- like Articles 62 and 63 for example -- which were not repealed in 2010 and came to haunt the politicians, even prime ministers, in the years to come.

But nothing matched the kind of criticism levelled against this dreaded amendment by the army chief in the early part of last year in a newspaper interview. The amendment poses a serious problem, bigger than the six points of Sheikh Mujibur Rehman, he is reported to have said. And once he had spoken his mind, the lines were more clearly drawn -- between the pro-and anti-amendment quarters.

People have become more sensitive to any mentioning of the 18th amendment since then but they are particularly looking at the newly elected government for clues. So when the Federal Minister for Water Resources, Faisal Vawda, expressed his displeasure at this transformative legislation which he claimed needed some transformation itself, he was criticised a lot by the pro- quarters. Vawda hasn’t budged from his position, which he has clarified may not be his party’s position.

But political scientist, Dr Mohammad Waseem, does not foresee any dividends for the PTI government from the current debate. "The perception is that under Prime Minister Imran Khan, the establishment has become very strong and is [therefore] putting its weight behind him."

Even though the 18th amendment brought about changes to 102 articles of the constitution -- discussed and put into effect by the rightly named constitutional reforms committee, in the spirit of the 1973 constitution -- it is widely understood as leading to a devolution process. And rightly so because this is where all or most implementation issues lie in.

The current problem is arising out of the expected interpretation of this amendment by the Supreme Court, which is mainly about the federal government’s authority to run educational and health institutions in the provinces, both existing and future. In the most recent case heard by the apex court, the Sindh government’s argument is that these institutions should all be handed over to the provinces for all times to come because there is, it says, clash between executive authority of the federal government and legislative authority of the provinces.

The judiciary has every right to interpret the constitution and hence the 18th amendment as well but what the pro- quarters seem worried about is that the interpretation should not be against what they call the spirit of the constitution. Now, the Supreme Court can interpret it according to its own vision: it can decide whether to give it back to the parliament for further legislation or create a federal jurisdiction in this regard.

The current problem is arising out of the expected interpretation of this amendment by the Supreme Court, which is mainly about the federal government’s authority to run educational and health institutions in the provinces.

Devolution is after all a complex process, and the courts in all federations are seized of these matters all over the world, even in countries like the United States.

However, in our context, it appears that two things militate against the 18th amendment. One, the size of the federal government did not shrink after the amendment was passed; no ministry was abolished; and the federal bureaucracy still operates with the same number of people. As a result, the federal budget has stayed as big, there is large-scale borrowing, fiscal deficit and less revenues. That the situation is dire can be gauged by the fact that even the IMF has proposed that Pakistan must slash its provincial share in the National Finance Commission award. Two, the military wants to roll the amendment back for the simple reason that there is little left with the federal government to spend on defence budget and other security needs.

Senior academic and analyst, Pervez Hoodbhoy, thinks the 18th amendment "is the most dramatic de-concentration of power in Pakistan since the drafting of the 1973 Constitution. Arguably, it has reduced -- though not eliminated -- chances of upfront military rule. Its unanimous passage by the parliament came as a consequence of the bitter experiences of 1971 and that of four military governments."

The key changes to the constitution, in Hoodbhoy’s view, are: "strong limitations on presidential power, enhanced role of parliament, and devolution of some important powers to the provinces with concomitant support to the National Finance Commission. By taking steps towards a fairer distribution of financial resources to provinces, the NFC has helped lessen tension between the centre and periphery".

When Hoodbhoy talks of reduced chances of "upfront military rule" he is probably also referring to the substantive changes in Article 6, which are often ignored when discussing this amendment. Another important addition was the insertion of Article 19 -- the right to information for all citizens, now provided in the constitution.

Dr Waseem looks at the issue in a historical context, recalling how there has been a constant struggle for provincial rights in the last 70 years. "More recently, the government and the opposition have had a similar agenda about devolution but the state elite has a centralist approach.

"The 18th amendment was just the beginning of the devolution process which did not go down well with the powers that be; they accepted it with a grudge. When it came to the implementation part, the power to make policy was still in the hands of the Centre, such as the education sector. There is double presence of ministries -- at the Centre and the provinces."

No one is denying there are problems. But Hoodbhoy thinks they are "fixable". "The provinces have even less capacity than the federal government in key issues, such as education, water resources, health, waste disposal, and pollution. Corruption is endemic, and provincial elites handle big funds with minimal oversight. Surely, these problems must be fixed through rigorous enforcement of rule of law," he says.

Dr Waseem suggests two steps that should have been taken to ensure a smooth functioning of the amendment, "Bureaucratic reforms and financial decentralisation should have taken place simultaneously."

Some recent remarks by the Supreme Court refer to a hasty passage of the amendment. The legislators who were then involved in the process would seriously contest such remarks, because their claim is that there was exhaustive discussion which was deliberately kept away from media glare in order to arrive at a consensus.

For an ordinary citizen, this whole discussion may seem like a turf war between institutions. Hoodbhoy says, "the current push to repeal it is largely coming from the nation’s unelected not-so-silent caretakers. Through disallowing debate, their institutional interest has generally become conflated with the national interest.

"As they see it, undoing NFC will free budgets presently controlled by provincial governments. Military and security related expenditures can thereafter be enhanced while remaining concealed. In this way it is hoped that the IMF will more easily bail out Pakistan from its current economic crisis."

Mian Raza Rabbani, then head of the constitutional reforms committee who spearheaded the process of passage of the 18th amendment, had said in a 2010 interview that this was the first time a parliament was enacting its own amendment; earlier, he claimed, it had been endorsing legal framework orders of dictators.

Let us protect the amendment and the spirit of federation that lies behind.

Who's afraid of the 18th amendment?