"My issues are locale, characters and life"

Urdu novelist Muhammad Asim Butt speaks about the habit of revising his drafts, his fixation with the walled city, dilemmas of a writer and obviously his forthcoming novel 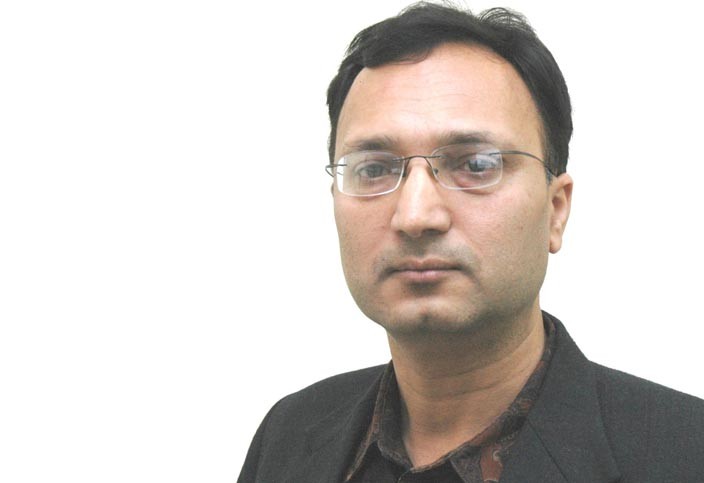 Muhammad Asim Butt is an Urdu novelist, short story writer, translator, researcher, editor and critic, whose third novel Bhaid (Secret) is all set to be published soon. While he began working on the novel’s manuscript even before the publication of his previous novel Naatamaam (Incomplete) in 2014, it took almost ten years for him to finish it. He has earned quite a reputation for reworking and revising manuscripts.

As we begin this interview, Butt acknowledges that this habit of his has reached a level of sickness: "My daughter used to say that she wants to become a novelist, but after looking at my ways she has given up," he smiles. "The fact of the matter is that writers in all parts of the world make an effort to put forward the most refined version of their books."

Even when word processors and editing tools were not in vogue and one had to write by hand, Butt would work for long hours, mostly at night. His first and personally most loved novel Daira (Circle) was revised and rewritten by him manually seven times before it was composed on a computer. Perhaps it’s due to this labour and perfection for craft that he is seen as the leading writer of his generation by the likes of Shamsur Rahman Faruqi, Abdullah Hussein and Dr Enver Sajjad.

Even with the high regard that literary critics have for his work, Butt is not that popular among general readers. He is not troubled by the dichotomy though as he’d "rather take the risk of experimentation than have an easy plot and safe characters". His last novel, Naatamaam, won awards and was much celebrated but to him it was an inferior book as compared to his other works.

"Naatamaam became popular as it was a love story," he says. "I know that my first novel Daira and the forthcoming, Bhaid aren’t for every reader. My appeal is limited due to the subjects I choose but that’s how I am. I cannot do otherwise.

"Many of my friends say that Manto was the epitome of story writing; as his stories contained events, a beginning, body and a proper end. They say that all other kinds of stories are just experiments. But I think there should be some grace marks for testing new things."

There were not many Urdu literary novels being written when Butt started writing, back in the 1990s. Writers are now increasingly turning towards novels.

"The situation is different today. A fresh crop of novel writers is now emerging, apart from the many experienced poets who turned to novel writing like Syed Kashif Raza and Fehmida Riaz among others. Perhaps the international market lured by politics is more drawn to novels. A lot of writers are ready to adopt this genre these days, so the need to clarify the basic criteria of novel writing is now present more than ever. We are in a much complex human situation, which needs a complicated genre like the novel to represent itself. The best way to describe life right now is that it has no limits and no well-defined structures.

Even with the high regard that literary critics have for his work, Butt is not that popular among general readers. He is not troubled by the dichotomy though as he’d "rather take the risk of experimentation than have an easy plot and safe characters".

"Fiction is essentially about events. They can exist in the mind or the readers would get bored with narration becoming report or an essay," says Butt.

"The old archetypes of literature don’t work anymore. The advent of Google and other information technology platforms have posed even more challenges as there is massive technical knowledge available now, at the touch of a button. In the days gone by, creative novels like Moby Dick by Herman Melville were full of technical details that could train a reader to even hunt whales. But such details mean nothing anymore. Everything from books to interviews, to biographies of writers, etc., is available online. In such a situation, what new information can a novel offer?" He goes on to say.

A recurring theme in all of Butt’s novels, including the forthcoming one, is the locale which is Lahore’s walled city and its surrounding areas. Upon being asked why he continually chooses to recreate a life which is no more he says: "The story could be blurred and names might change but the locale has to be solid. That’s my scheme. Painters and fiction writers can’t ever be free of their locale. For example, I used to live in Kucha Khawaja Rafiq Shaheed in the walled city which had a different name then."

His emphasis is upon describing the general social environment of the walled city and interactions of people who live there, instead of giving a clear political or social message.

"It is all about one’s approach. I am not an issue based writer. My issue is locale, characters and life directly. My story ‘Ghubro’, set in the backdrop of Bhati gate and Mochi gate, is the perfect demonstration of this fact. In the story, there are three friends who chant slogans of different political parties during the day, but every morning they wake up missing their mothers and their families back home. They are just ordinary guys who are not actually committed to their ideologies, but their unique situations force them to live that life.

"Locale has always been important for me. Once, while I was passing through the village of renowned poet Gulzar along with a friend of mine -- who incidentally also belongs to the same region -- he turned towards me and said: "Look, this is the beauty of Potohar!" To me, that apparent serenity just looked like a ruin and nothing else.

"Having an in-depth knowledge of Lahore’s walled city, I can convincingly say that its people are festive. In the walled city, if a person can sit with someone for an hour without uttering so much as a word, he’d either be deemed a saint or a devil or a mental case. Personally, I find these crowds quite fascinating since they allow me to just be, nameless and faceless. You can get lost in that crowd and in doing so, become part of a collective experience which is just of the present. That’s fun.

"I have moved from Lahore to Islamabad -- which I call a generous city -- and back to Lahore many a time. Due to which, I have constantly faced the issue of locale. While living in Rawalpindi, I would place my characters and the plot around Rawalpindi’s commercial market or Chandani Chowk but after a few chapters, inadvertently changed the backdrop to Darogha Wala Chowk in Lahore. I thought of characters in Islamabad but they would wander in the streets of Lahore. Poets can have the liberty to be anywhere, but for fiction writers, it’s an issue. One has to specify things and their characteristics and then tackle the responsibility to stick to the explanation."

It’s equally interesting to know that the main protagonist of Asim Butt’s forthcoming novel lives just outside the walled city. He has an active life but also feels alienated. According to Butt, the idea of the novel Bhaid emerged from his own experience of loneliness after he finished the last -- also the sixth -- manuscript of his first novel Daira. He started missing his female protagonist and other characters of the novel, with whom he had developed an intimate attachment after spending more than a decade working on the novel.

Its story revolves around a writer, ensnared by the main female character of his novel. However, at the end of Bhaid, it emerges that the protagonist himself is a figment of someone else’s imagination. He gets to know that every character, shop, road in the novel he is writing has a name but he himself is nameless and without a background. He can’t change anything and is in control of the story he created himself. The narrator, the real hero of the story, eventually realises that we are all characters of some lost manuscript. Our fate is predetermined, but that does not stop us from struggling to change our destiny. We keep hoping that writing down our stories will help change our destiny.

Butt says that this novel, whose narrator is unknown, is also a comment on our contemporary political scenario. In the process of the story, we also come across a whole range of characters living in the walled city e.g. Iqbal Muda, Aslam Schura, Mithu Alien, Rafia etc. These, according to Butt, are interesting people who are "without a background".

Butt says that all writers are influenced by their own situations and momentary contexts but they don’t discuss those. The general public doesn’t know what writers go through while writing, and the influences it has on them. For example, he says, he once contracted severe food poisoning while writing a novel. When he got back to writing after recovering, he changed the course of one of his characters.

It remains to be seen how literary critics and readers will respond to Asim Butt’s new novel. The writer Mustansir Hussain Tarrar -- in his foreword to the novel -- calls it ‘the secret of Lahore’, a ‘labyrinth’ that won’t allow you to come out of it.

"My issues are locale, characters and life"