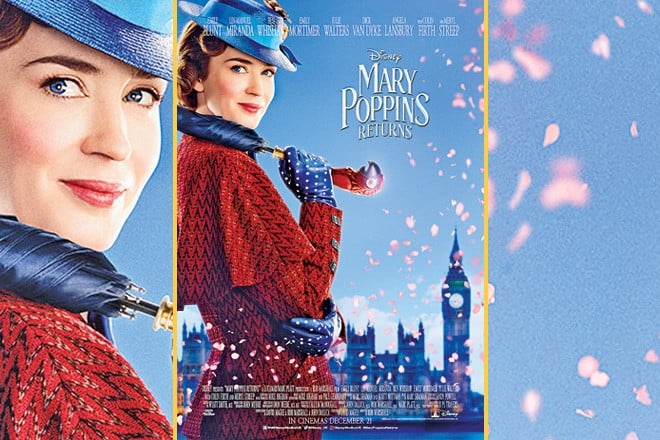 It may have taken her more than 50 years but everyone’s favourite magical nanny is finally back in cinemas with Mary Poppins Returns, a pleasant revisit to the fantastical world that was originally conceived by writer P. L. Travers (who, incidentally, thoroughly disapproved of such cinematic adaptations).

Created in the image of its beloved predecessor, the sequel stays true to the style and spirit of the 1964 classic and offers another enchanting, family-friendly adventure, exuding joy for kids and nostalgia for grownups.

Set in 1930s depression-era London, the film picks up 25 years after the events of the original. The Banks kids - Jane (Emily Mortimer) and Michael (Ben Whishaw) - are now adults and no longer believe in the magic Mary Poppins brought to their lives when they were young.

Michael, who has three children - Annabel (Pixie Davies), John (Nathanael Saleh), and Georgie (Joel Dawson) - is struggling with financial problems while coping with his wife’s death. Unable to pay back a loan he took from the Fidelity Fiduciary Bank - which is being run by new president William Wilkins Jr. (Colin Firth) - Michael risks losing his home unless he can produce a missing certificate that proves his father left him and Jane shares in the bank that can cover the loan.

When things start to look grim for the family, Mary Poppins returns to, once again, take care of the Banks children, even the ones who have now grown up, and bring some magic and wonder into their lives.

Bright, colourful, and full of whimsy, Mary Poppins Returns is powered by a cast that is downright charming. Blunt is practically perfect in every way as the protagonist; while she doesn’t surpass Julie Andrew’s iconic performance, she is certainly a worthy successor to the role. Lin-Manuel Miranda, who plays a cheery street lamplighter, impresses whenever he’s onscreen, bringing mirth to the movie with his singing and dancing. Wishaw’s emotional performance adds poignancy to the drama. Meryl Streep plays a short but memorable part. And seeing Dick Van Dyke make an appearance in the film is an absolute treat.

But even the strong performances cannot hide the fact that the storyline is predictable. The film follows a rather unimaginative path; it is perhaps a little too dependent on the template of Mary Poppins and often feels like it is trying to recreate the classic. The musical numbers aren’t quite as catchy or instantly memorable as they were in the first instalment, and some of the musical material slows down the proceedings.

That said, however, the movie is certainly still very entertaining. In the fairly sturdy hands of director Rob Marshall, Mary Poppins Returns is an enjoyable revisit to a familiar world. The film is visually spectacular. Plus, there is enough humour in the script to keep you amused and enough tenderness in the story to keep you emotionally invested. It may not be as supercalifragilisticexpialidocious as the original, but this nostalgic, joyful sequel is just as likely to leave you with a smile on your face.

Spider-Man: Into the Spider-Verse****

Spider-Man sure seems mighty busy lately. Over the last few years, the popular superhero has been helping The Avengers in their quest to defeat super-villains while starring in his own arc in the Marvel Cinematic Universe. And now one of his alternative versions is helming his own Sony animated adventure, with a little help from various versions of himself from parallel universes.

Presenting the first non-white screen portrayal of the famous web-swinger, Spider-Man: Into the Spider-Verse revolves around the character of Miles Morales (voiced by Shameik Moore), a teenager who acquires spider-like powers and soon finds out that there are many other people with similar abilities in other dimensions.

When the nefarious Kingpin (Liev Schreiber) activates a particle accelerator to access parallel universes, five different Spider-Men and -Women (and -Ham, because why not) end up in Miles’ world.

The youngster must step up and learn to control his powers while helping the Spider-Gang turn off the collider, save the multi-verse, and return to their own dimensions.

It would be easy to be a bit weary of this revisit to the world of Spider-Man, seeing how this is yet another reincarnation of a character that has seen numerous reboots already. Surprisingly though, what we get here not only feels fresh but is an utter delight.

Developed with the help of Phil Lord and Christopher Miller and directed by Bob Persichetti, Peter Ramsey and Rodney Rothman, this animated adventure (almost unexpectedly) manages to be fun, exciting, amusing, and affecting.

Free from the weight of having to adhere to a larger cinematic universe, Into the Spider-Verse takes the opportunity to explore its protagonist with warmth and wit, creating what is perhaps the most interesting cinematic take on the character while both celebrating and gently poking fun at its many incarnations. Its basic storyline isn’t particularly exceptional, but the film still finds new thematic territory to explore, even as it adheres to the overall good-versus-evil template, and adds emotional depth to the proceedings with its family-related elements. The movie also entertains by using an inventive visual style, joyfully capturing comic book aesthetics. Plus, the snappy retorts and fast-paced action make sure that the film remains enjoyable throughout.

The animation is terrific, as is the well-picked soundtrack. And the voice acting is impressive across the board. Some of the less-utilized alternative versions of Spider-Man could have been given a more integral part in the story, but other than this minor gripe, Spider-Man: Into the Spider-Verse is a diverse, funny, poignant adventure that makes for a rewarding cinematic experience.

While the MCU is still focused on Peter Parker, Into the Spider-Verse is likely to make you glad that Sony decided to tell the story of Miles Morales and leave you looking forward to the sequel(s).