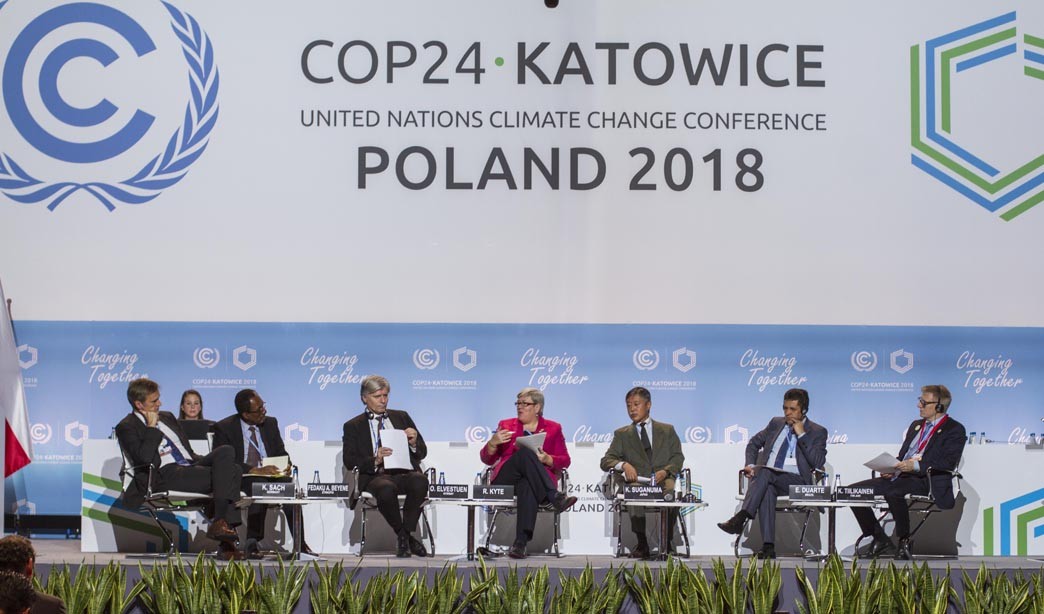 One of the indictors of successful negotiations is that its outcome should equally disappoint all negotiating parties. Outcome of the 24th edition of climate negotiations (COP24) in Katowice, Poland is no exception. All 196 member states, mainly divided into "developing countries" and "developed world", had to compromise their stated positions to agree on a 133-page final text, which in itself is a major achievement.

From a global perspective, Pakistan and other developing countries, who are also least polluters and hence less responsible for global warming, would still have to wait till 2020 before developed countries start implementing the 2015 Paris Agreement on climate change. Unlike Kyoto Protocol that differentiated between the polluters (rich) and vulnerable (poor) countries, the rulebook guiding implementation of Paris Agreement would be applicable for all states.

After 2020, a process would start through which the developed countries (who are most polluters and responsible for global warming) would have to be more open and transparent about their financial support to the most vulnerable countries. Thus, it would be difficult for them to label their existing aid, grants, and soft loan under climate financing. They will also have to report their greenhouse gas emission reduction progress (i.e., decarbonising their economies) in line with global commitment in Paris to keep the global warming well below 2°C compared to pre-industrial levels. The developing countries would also have to ensure and report their progress on reduction in greenhouse gas emissions under a common reporting system.

The only but a major caveat for developing countries is finances and technology transfer. Their individual shares in global carbon emission are insignificant so theoretically speaking they can carry on using fossil fuels until they reach to the level of emission of major polluters like US, China, and other developed economies. If developed world wants them to reduce their emissions, then it should support them through finances as well as technology and renewable energy resources. The Katowice outcome does not exactly meet developing countries’ expectations, but provides a ray of hope that through multilateral negotiations, few years down the road developed countries would partially start compensating for polluting the planet.

While the world is struggling to keep the global warming below 2°C, a special scientific report by the UN Intergovernmental Panel on Climate Change warned of the vast economic and social costs of overshooting 1.5 degrees of global warming compared to pre-industrial levels. "There are only 12 more years for global warming to be kept to a maximum of 1.5oC, beyond which even half a degree will significantly worsen the risks of drought, floods, extreme heat and poverty for hundreds of millions of people," warns the report. "We require radical economic shift and speedy decarbonisation to survive" is the crux of the report based on scientific evidences. Economic shift and speedy decarbonisation mean shifting from fossil fuel to renewables, changing our production-consumption patterns, turning our economies to circular economies with zero waste and hundred percent recycling-reuse and adapting to less energy intensive lifestyle.

The findings of this special report are so terrifying that low lying islands and most vulnerable countries to climate change asked to switch from the main 2-degree goal of the Paris Agreement, to a much more ambitious 1.5-degree target by 2020. The oil exporting countries including the US, Saudi Arabia, Russia, and Kuwait resisted it and finally science had to give in to geopolitics with no commitment for climate efforts to be aligned with the 1.5-degree goal in the final text.

The Katowice outcome does not exactly meet developing countries’ expectations, but provides a ray of hope that few years down the road developed countries would partially start compensating for polluting the planet.

Similarly, there is no substantial progress on "loss and damage mechanism". How to attribute a drought, flood, famine, heatstroke to climate change, and how to compensate for it, is still to be negotiated. Having said it, one can say that multilateralism though bruised in Katowice has survived and eventually will heal in years to come.

The US under President Donald Trump has vowed to withdraw from the Paris Agreement, something that under the rules will happen only in 2020, but the US was not absent from negotiations and refused to accept the system under which developed and developing countries are treated differently. The US also held an event in Katowice supporting nuclear and fossil fuels.

The vacuum made by retreat of the US from climate diplomacy was rightly filled by the world’s second-largest economy and largest polluter, China. China, on one hand supported smaller developing countries to get greater financial and technological support, and on the other hand worked closely with the EU to pave way for a common reporting and accounting system applying to all countries’ emissions reduction efforts.

China’s leading role in climate diplomacy is a good news for Pakistan. China is now an advocate for clean and green growth and is asking for technological transfer and financial support for climate change affected countries. This provides an opportunity to Pakistan to get environmentally friendly technologies (energy generation and transport) and support for clean and green growth under the second phase of CPEC.

In terms of representation of Pakistan in Katowice, there were only 6 representatives in our official delegation and unlike other countries, we had no pavilion to showcase our efforts to combat climate change. I would have been blasting against these measures which were done under austerity drive as including self-financed experts in the official delegation or setting up "Pakistan pavilion" through the sponsorship of private sector especially the solar energy companies don’t cost public exchequer a penny. However, the active participation and performance of Malik Amin Aslam, Federal Minister and Advisor to Prime Minister on Climate Change mitigated the negative effects of this decision.

Owing to his academic training, Aslam knows his subject very well and he played an active role not only in negotiations but also in the side events. It was due to his convincing performance that Pakistan managed to get elected as Vice President and the rapporteur of UNFCC COP for next Conference of Parties meeting (which would be held in Chile in 2019). It also secured slots in five other climate bodies including the Executive Board of Clean Development Mechanism, Standing Committee on Finance, Adaptation Committee, Consultative Group of Experts and Technology Executive Committee.

Despite being one of the vulnerable countries, lately Pakistan had no say in climate diplomacy as it is neither a major polluter, nor a major financer. However, the developments in Katowice have brought it to mainstage, where, as the vice president of COP it will play an important role in taking the Paris agenda forward. This responsibility demands leading through actions. While convincing international community to contain global warming below 2oC compared to pre-industrial level, Pakistan would also have to ensure that it follows a clean and green growth path.

China as an advocate for decarbonisation and Pakistan as a facilitator for next year’s negotiations can turn the economic growth landscape of Pakistan clean and green. What matters is preparedness at our end to benefit from the opportunities that are coming in our way.