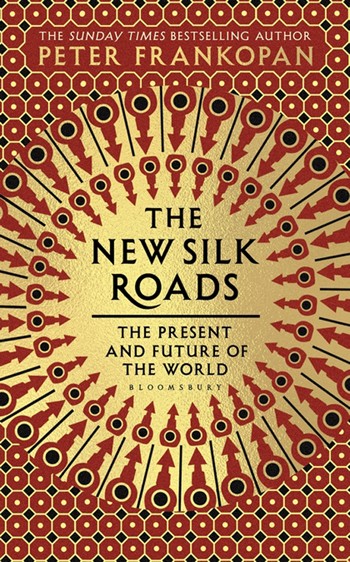 If you are going to read only one non-fiction book in the coming year, let it be The New Silk Roads by Dr Peter Frankopan. From explaining why donkeys are expensive in Pakistan to the rising salaries of airline pilots, this book has all the answers and some more.

As a new ‘final chapter’ to its predecessor The Silk Roads: A New History of the World, this considerably shorter book is mostly concerned with the current state of affairs. It explains how events in the world have unfolded in the last three years, creating waves in the rest of the world.

Dr Frankopan’s first book offered a very different thesis. It looked at history in a more interactive way, where influences from the east shaped the western world of today. He posited that even two thousand years ago, the Persians, the Huns and the Chinese interacted along the trade routes and religious fault lines, which created tremors that were felt very clearly in Europe.

His previous work on history has put our part of the world back in prominence. The Silk Roads parted ways from the given Eurocentric narrative, to highlight how Persia, Russia, China and the Indian subcontinent were always in a constant give and take state with Rome and Europe.

New Silk Roads is an iteration of the previous book in a new time period; that of today. With today’s world in mind, he charts the changes that are taking place in one corner of the globe, and their impact on another. What happens in China now has an impact in Europe and the United States of America (USA).

From the golden age in Europe that was self-sufficient -- according to previous narratives -- the world of today is now more interactive, or let’s say more global. Now studios like the makers of Jurassic Park are owned by a Chinese group. Similarly, many football teams in the United Kingdom (UK) have owners that are not English. Dr Frankopan explains how properties in London are expensive on account of foreign investment that has occurred. While such information drives forward his thesis that the decisions taken in Beijing or Riyadh or Moscow, have an impact on the western world like never before; it also provides relevant information to a reader who may be wondering about applying for a scholarship in a Canadian university. All roads indeed go to the east.

Besides, there is a major shift in capital from the west to the east. There is an air of optimism in the east, a state of hope, but pessimism in the west. In the west, an emphasis can be seen on narrowing down on plurality and diversity. There is an insistence on keeping the old ways, whether it is Brexit or "making America great again", we can see a shift in attitudes that are generally leaning towards non-exclusiveness.

What make a non-fiction book like this interesting are the examples that Dr Frankopan uses to illustrate his thesis. The facts and figures from trades to the tweets of the US President Donald Trump, all stories and statistics signify the tectonic shifts taking place all around us. For example, how one Chinese investor has bought farming land in France where wheat will be grown for making French bread in bakeries in China. According to the investor, as GDP in China continues to rise, it can be expected that Chinese tastes will shift from rice-based diets, increasing the potential for selling French bread to the Chinese population.

Just like China once dominated the luxury goods production, namely silk, it now will be a consumer of luxury goods. An affluent population in the east means more people can afford air travel, thus providing a boost to the flying industry where the demand for Boeings as well as its pilots has gone up. As the writer puts it, there are fortunes to be made if one understands the spending habits of an affluent class. But these fortunes will be made in the east and not the west.

Also read: "I am lucky that I get paid to think"

While the book has many facts and figures to support its thesis, it very clearly states that we are living in a time of great changes. These changes owe themselves to not just advanced technology but to the opening of more routes -- trade routes to be precise. These are still the old silk roads of bygone times. Just as Christopher Columbus and Vasco de Gama charted new maritime routes and changed the face of world trade, the world is now going through another such change and this time, it is the old silk roads.

From the rivalry between countries to escalating tensions in the world, consumer habits and what interpreting them correctly can mean for the businessman, this is the book to read. Dr Frankopan’s writing style is helpful; his sentences have a flow and the book reads quickly. Even though non-fiction can be dense and unreadable sometimes, this book stands out for its readability.