700 teams, 7000 players and over 7000 matches in 2018 across the country but Leisure Leagues, the mini-football organisers, want to do even more 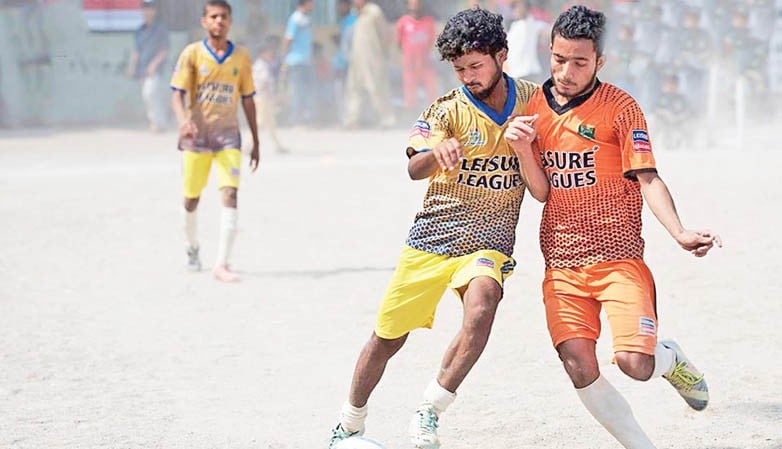 The Leisure Leagues came into limelight with a bang when it hosted several international players including former iconic Brazilian player Ronaldinho Gaucho for two festival matches in Karachi and Lahore last year. It was a time when top athletes were reluctant to come to the country - even to play in lucrative Pakistan Super League (PSL).

Although the well-known footballers that also included Wales player known for his stint with Manchester United Ryan Giggs and French Nicolas Anelka had passed their prime, the fans were not short of enthusiasm.

Afaq Ahmed was attracted to play in Leisure Leagues’s football events only after seeing his idols in flesh and blood in hometown Lahore.

"At first, it seemed it was all a gimmick that players like Ronaldinho and Giggs would come to Pakistan. But after they arrived here, we realized Leisure Leagues was something and we were allured towards it and later played in its events," Ahmed said.

Ahmed’s team ICAW - an abbreviation of ‘I can and will’ first won Lahore intra-city championship and qualified for Leisure Leagues National Finals and eventually won it and qualified to represent Pakistan in Socca World Cup held in Lisbon, Portugal in September this year. The team failed to win a single game against group opponents Russia, Moldova and Spain but the youngsters had an experience of a lifetime.

Pakistan’s participation in the Socca World Cup has injected more enthusiasm among the new lot and Leisure Leagues has now been organising mini-sided football at almost all levels - from schools, colleges, universities, clubs and it has also even allured corporate teams and diplomats into playing the exciting format of the most played game globally. Leisure Leagues seasonal league has just entered in its fifth season.

According to statistics provided by Leisure Leagues’ officials, the organisation has organized over 7000 games involving as many players representing 700 teams in tournaments during the year 2018 in 28 cities of the country.

Chief Operating Officer Ishaq Shah says that Leisure Leagues has been trying its best to involve as many people, mostly youngsters as much as it can throughout the country.

"And we want to do it in a way that it is sustainable because we are here to stay and get bigger with every passing year," he said.

Leisure Leagues has so far reached to all four provinces of the country and to be precise, to 28 cities. These cities include from megalopolis Karachi to remote areas of Gilgit-Baltistan.

Earlier in 2018, Leisure Leagues hosted Karachi Youth Initiative Tournament where 1000 players representing 100 teams - twenty teams from each of the five districts Karachi namely District South, Central, East, Malir and West participated. Each player who participated in the tournament was given free kit and football shoes.

Lutfi is considered as the best football coach in Pakistan. He has coached both men and women’s national team in the past. He has also coached departmental teams and is currently coaching SSGC at the moment. He was hired to coach the Portugal bound team for Socca World Cup.

"World Group spread a brilliant network for small-sided football in the country. It also promised to bring international football idols to Pakistan, which was nothing less than a dream for Pakistan football fans. Last year they brought big names of the football world like Ronaldinho and Giggs and they also played a couple of matches here. It had been a great inspiration youngsters and persons who play football," Lutfi said.

He added that operating in such details has been difficult for Pakistan Football Federation (PFF) at such a level as that of Leisure Leagues due to lack of funds.

"But Leisure Leagues managed to spread the network and provided platform for persons who want to play football even in remote areas of the country, which is commendable," he said.

Lutfi said that football is played among eleven players but small-sided football provides basics to the players and all renowned coaches in the world, who prepare eleven-a-side team, uses small-sided football format for training purpose in order to empower players with better skills.

Essa Khan also lauded for spreading mini-football infrastructure throughout the country and preparing and sending a Pakistan team to feature in a tournament that has been dubbed as Socca World Cup during the year.

"I hope Leisure Leagues maintain its football activities in 2019 just as it did brilliantly in 2018. It was great to see our team featuring in a mini-football World Cup, which was made possible by Leisure Leagues," Essa said.

"Moreover, spreading its scope to small cities like Mach or Hunza is also a very welcoming sign for football in the country. Others have mostly restricted their activities to big cities where it is easy to conduct such activities but organizing tournaments in remote areas is huge challenge, which Leisure Leagues has taken. They should be praised for this as well," he concluded.