Shahjehan Saleem
In the picture
December 23, 2018 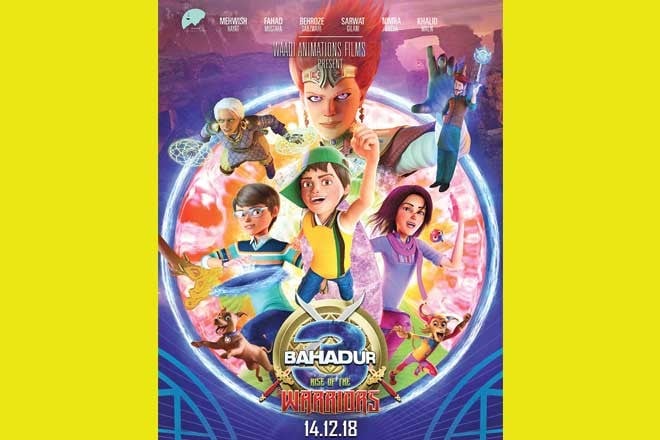 A number of animated features releasing in Pakistan in the last few years has proven that the genre once thought fit only for children has found a niche in the cinema-going circles. Be it The Donkey King or Allahyar and the Legend of Markhor, audiences have enjoyed the marvel of new animation technology and its multifaceted visuals. However, with a number of narratives releasing, it has also brought up questions on whether the filmmakers are utilising the best of their craft. Unfortunately, that’s where Sharmeen Obaid-Chinoy’s recently-released film, 3 Bahadur: Rise of the Warriors falters.

Featuring new characters voiced by Pakistan’s top celebrities like Fahad Mustafa, Mehwish Hayat, and Nimra Bucha, the film is set out to entertain children and adults alike as the story of Saadi, Kamil, and Amna comes to an end. However, the question remains; did the end to the three-part series bring anything new to the table?

Exploring once again the lives of the 11-year-old trio, the plot of 3 Bahadur: ROTW largely looks at the entry of two feuding powerful characters from an alien land called ‘Poshinia’ - Erma (voiced by Mehwish Hayat) and Babushka (voiced by Nimra Bucha), who accidentally make it into the world of Azad Nagri. The revelation about who the two whimsical characters really are, and how the ‘3 Bahadur’ will tackle issues such as famine and the entry of evil forces is what the subsequent story delves into.

Albeit the film is not extraordinarily unique and still follows the formulaic narrative the previous two parts have utilized, 3 Bahadur: ROTW is a step in the right direction. It has managed to introduce new characters, without caricaturing their narrative too much, while also properly culminating the story of the series. Adding onto it, for the first time, it also felt like SOC has managed to do away with adding a myriad of exhortations throughout the film.

However, 3 Bahadur: Rise of the Warriors is far from perfection.

While the film may have given the series a much cleaner palette to work on than the first two, the issue remains the lack of development in any of the characters in the film. Three films in, Saadi, Kamil and Amna still are as unappealing to children - as it was visible during the screening - as they were to the adults. One wonders if keeping the characters stuck to their archetypal characteristics really helped the film at all.

On the other hand, the film’s animation still signals towards an archaic design, which seems to have gotten no better since the time, when the first film released in 2015. At a time when Pakistan has released not one but many films with better animation such as The Donkey King and Allahyar and the Legend of Markhor, it’s a shame that there has been no advancement in this series.

However, none of the aforementioned issues are as big as unnecessary branding exercises and product placements of which, it seems 3 Bahadur always seems to draw the shorter straw. One wonders, for a film that is all about fighting evil and keeping things safe, how does converging the animated world with a fast-food eatery help in moving the discourse forward.

All in all, while the film is probably the better one of the three, it still falters at places where by now, it shouldn’t. However, with new animated projects by Sharmeen releasing soon, one can only hope that movies being made in Pakistan continue to get better.