From Bhutto to Bilawal 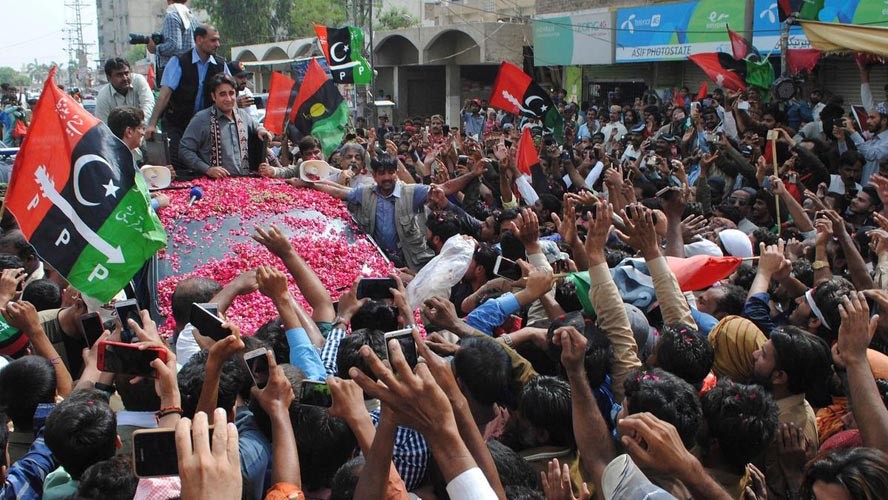 Born in Lahore in late 1960s, the Pakistan People’s Party that got power under the vibrant leadership of Zulfikar Ali Bhutto has now turned 51. Outmaneuvering all political parties in West Pakistan, it stirred new issues in the elitist club politics in Pakistan. For the first time, not only the middle and lower classes but also the professionals became involved in politics. However, what happened to this party (PPP) in the last 51 years needs some retrospection.

Though it did make some compromises with the establishment, its democratic credentials have remained unquestionable at least until 2008. Creation of the 1973 Constitution, signing of Charter of Democracy (May 16, 2006) and 18th Amendment (April 8, 2010) are reminders of the glory and commitment of the party. In all these milestones, the party leaders remained loyal to reconciliation and democratic principles and engaged the opposition parties and leaders.

Nevertheless, what has happened to the party in the last 10 years is a challenging question not only for its critics but also for it supporters. Practically, the party is limited to interior Sindh, though thanks to Saeed Ghani and Raza Rabbani it has some influence left in urban Sindh. It has lost its appeal in the Punjab, more precisely in the areas adjacent to the famous GT Road. In the past, the party had its power base in those very areas.

In 1970, it was a ‘Punjabi party’ but in 2018, it has largely become a ‘Sindhi’ party. Till 2008, the party had won enough seats from Punjab, yet in 2013 and 2018 its deterioration in Punjab was complete disappointing even its diehard workers. A section of establishment had tried its level best to finish its popularity from Punjab but they could not do so even in the 11-year barbaric rule of Gen. Zia.

Expulsion of PPP from the political scene of Punjab was partly by design and partly due to excessive influence of PPP Sindh on the decision-making processes. Punjab is not the only province where the party has lost its popularity; its position is pathetic even in Khyber Pakhtunkhwa. It has no MNA from this province in election 2018. PPP’s ambiguous stand on creation of new provinces is a primary reason for its downfall in both provinces but it is not the only reason. The federal stature of the party suffers as a consequence.

Expulsion of PPP from the political scene of Punjab was partly by design and partly due to excessive influence of PPP Sindh on the decision-making processes.

The PPP’s stand against division of Sindh would have a strong footing if it was based on constitution rather than ethnicity alone. No one can deny the fact that Sindh is a multilingual and multiethnic province and historically speaking, all four provinces have this diversity. It is the job of a federal party to transform this diversity into strength for the provinces as well as the country at large. No wonder, there is a strong mindset in Pakistan that has always worked against linguistic and ethnic diversity. Some intellectuals often misleadingly translate ethnicity as racism in Urdu deliberately, thanks to the unitary approach we inherited from our colonial masters. But in a federal parliamentary system, there is enough room for diversity.

PPP was an exponent of that federal parliamentary system and that is why the makers of the 1973 Constitution, including ZAB, had agreed on Article 239(4), keeping in view the state’s ‘One-Unit’ mentality. They had considered provinces as political units and that is why in the article related to constitutional amendment (Article 239) they added clause 4. The spirit behind this extra cautious clause was that no one should play with the sentiments of political units i.e. provinces.

The PPP of 2018 is largely a product of particular circumstances that Pakistan had had to face after the 1985 non-party elections in general and in the 1990s in particular. Huge funds were poured into politics and media that expelled the middle and lower classes from the party gradually. Keeping in view the 1970 manifesto of PPP, the party was a major exponent of the rights of lower and middle classes. But it decided to play on the pitch prepared for upper middle classes and elite. This proved a turning point in its decline.

In the 1970s, it was a party that had challenged the elite openly not only within the country but also internationally. The party in the 1970s had introduced labour reforms, agricultural reforms and generic medicine law. But after 2008, it has no such feather in its crown.

PPP is intact in interior Sindh and is trying to secure some constituencies in Karachi, but it is not the party that was founded by ZAB and run by Benazir Bhutto. Bilawal Bhutto Zardari, its new leader, is young and vibrant and knows the legacy of his mother and maternal grandfather well. He knows very well where the party has gone wrong in the last 10 years. Indeed, it is time to revisit the last 51 years in general but the last 10 years in particular.

From Bhutto to Bilawal