War of the wards 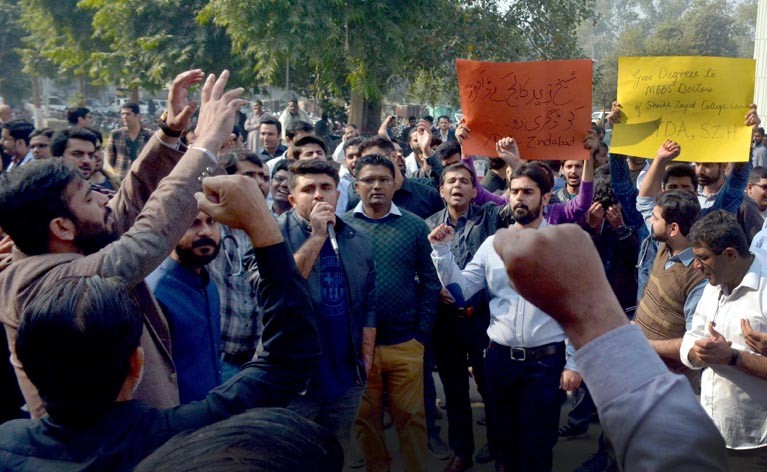 Lately, the public hospitals in Lahore have turned into war zones -- yet again. Sloganeering, shutdown of emergency wards, broken windowpanes, eviction notices, terminations, and what not -- all seems to be fair in this war between the new doctors who banded together under the umbrella of Young Doctors’ Association (YDA) to fight for their rights, and the senior doctors, in Punjab.

Ever since its inception in 2008, the YDA has taken to streets many a time, resorting to loud protests, road closures and, most controversially, lockdown of emergency wards in public hospitals. The dust barely settled on one dispute between the association and the administration when another one almost always raised its ugly head. Over time, the constant rift between factions in the medical community has led to an atmosphere of uncertainty which is palpable when you talk to anyone at any public hospital.

The most recent spat occurred when lady doctors at the hostels of Sheikh Khalifa Bin Zayed Medical College, Lahore, were given marching orders. Secondly, the stipend of post-graduate trainees was cut at Mayo Hospital. In a retaliatory move, the YDA members shut down emergency services in both the hospitals, as a mark of protest.

The YDA also has longstanding issues such as the (alleged) exorbitant fees at government hospitals.

Talking to TNS, the YDA spokesperson for Sheikh Zayed Hospital, Dr Hamid Riaz says there is "no transparency or merit in the recruitment system of young doctors. Favourites get all the positions while the hardworking doctors, usually from less privileged backgrounds, are put down."

About the eviction notices to lady doctors of SZH, he adds, "These [lady doctors] came from different cities of Punjab and could not afford good-quality and secure accommodation given their meagre salaries. It wasn’t just unlawful but also inhuman on the part of the administration to try and evict them from the hostels."

Riaz claims that the YDA is also fighting for the rights of the patients: "One of our key demands is [the] abolition of admission fee at some public hospitals. You know, the poor people are returned without treatment because they can’t afford [the treatment].

"When we raise our voice, we are threatened with termination," he says, lamentingly. "How can we work in this situation?"

When inquired about the impact of the YDA strikes, Riaz is adamant that "we go on a strike as a last resort […] only when the administration/government refuses to budge on our just demands."

When approached for comment, several senior doctors refused to come on record, citing the threatening attitude of the YDA towards them as the main reason. "They [the young doctors] would insult us if we spoke out," said one senior doctor, requesting anonymity. "We don’t want to be humiliated."

"They don’t even spare our female professors," another added.

The seniors termed the hostel eviction notices as a "non-issue." "No one was forced out… this is a hostel for students not lady doctors, to start with," said one of the faculty members.

"Medicine is teamwork; when the young doctors go on strike, there’s nobody to take the patients’ histories properly or conduct tests with care. Besides, those [patients] whose condition is critical and require constant monitoring are ignored perilously. Lastly, the chain of communication between the patients and doctors breaks down."

In response to a query about the admission charges and healthcare becoming costlier by the day, the doctor said, "If a procedure costs Rs70,000 at a government hospital, the same would cost upwards of 170,000 at a private institution.

"There are budgetary constraints. As much as we’d love to offer free treatment, the fact is that there are simply no funds available."

Lack of trust in the institutions is obvious from both sides. As a senior doctor said, the "YDA takes advantage of their nuisance value and get their own people hired. No doctor, whether senior or junior, would buy that merit is the sole factor in recruitment."

This schism seems to have political roots, too. Both sides claim neutrality but speak of manoeuvring and meddling by political forces in the affairs of public hospitals in hushed tones.

The plight of patients during the strikes is conveyed well by one of the senior doctors who said, "It is common for patients from far-flung areas of the city to come to Lahore for treatment. The loss in earnings of their attendants aside, they spend tens of thousands of rupees on travel, food, and accommodation; no one can imagine the emotional and physical stress that they take when they are told that they should come back some other day."

On a different note, one cannot help but notice that our government servants (teachers, clerks, young doctors etc) have, on one occasion or another, resorted to street agitation and strikes in demanding their "rights." Interestingly, it is common and very much legit for private employers to fire staff at whim. It seems that only the high and mighty have the right to have rights.

War of the wards