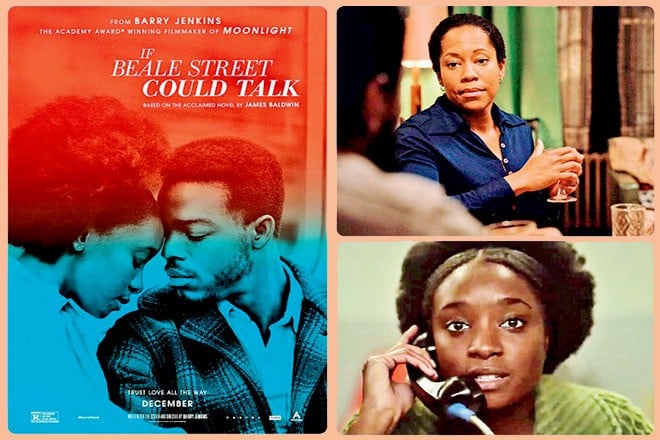 Love -- intimate, familial and fraternal -- infuses director Barry Jenkins’ ravishing adaptation of the 1974 James Baldwin novel about a battered romance that refuses to be a tragedy. Following up his Best Picture Oscar win for Moonlight, the writer-director opens his third film with Tish Rivers (KiKi Layne), 19, and Alonzo Hunt, a.k.a. Fonny (Stephan James), 22, strolling along the Hudson river. The fact that they’re wearing bright colors, which channels the sunny opening of Jacques Demy’s The Umbrellas of Cherbourg instead of the Horror City of 1970s New York, tells you everything you need to know. He’s not trying to give you gritty realism. Jenkins wants to create a tone poem out of heartbreak.

Still, nothing shines long for Fonny, the Harlem artist who’s been framed by a racist cop (Ed Skrein) and imprisoned for the rape of a Puerto Rican woman. The pregnant Tish feels lost, but not alone. Her family -- mother Sharon (Regina King), father Joseph (Colman Domingo) and wonderfully mouthy sister Ernestine (Teyonah Parris) -- offer support, even when the young man’s mother (Aunjanue Ellis) blames the girl for everything bad that happens to her son. The chorus of complaints is echoed by his sisters (Ebony Obsidian and Dominique Thorne), with only their father (Michael Beach) expressing warmth. Visiting her beau in prison, Tish’s voiceover reflects a feeling that echoes, then and now, through the black experience in America: "I hope that nobody has ever had to look at anybody they love through glass."

And so the fight begins to clear Fonny’s name. In flashbacks, we see how the couple came together. Jenkins alters Baldwin’s vision in these scenes. In the book, the rough-hewn Fonny is the polar opposite of the handsome James; the movie’s version of Tish is articulate, where the author made her fumbling and awkward. The purpose, however, is to show an idyllic world that racism denies to this couple. With the help of master cinematographer James Laxton, the film evokes a dream just out of reach. Beale Street, where the blues makes its New Orleans home, never comes into view in the film. Instead, Jenkins uses a Baldwin quote to indicate its symbolic meaning: "Every black person born in America was born on Beale Street."

With rich details and a compassion that reflects his deep-seated humanism, the filmmaker shows us how racial animus extends its poison tentacles. In a devastating scene, Fonny talks over dinner with his friend Daniel (Brian Tyree Henry), just released from jail after two years. Henry, one of the best character actors in the business, surpasses himself here by dropping Daniel’s macho swagger to reveal a terrified man stripped of his strength and dignity by the prison experience.

Then there’s the amazement of King’s performance, which should finally get her the Oscar she’s deserved for years. It’s Sharon who flies to Puerto Rico in an effort to get her future son-in-law out of jail by persuading the rape victim (Emily Rios) to admit she was manipulated into identifying Fonny in a lineup. The tension is palpable between these women, both being squeezed by a corrupt system not of their making. King is a marvel, her face and posture nailing every shade of fire and feeling to reveal how a character, pushed to her limits, still finds the courage to push back.

Like the book, the film offers no happy ending to a story still transpiring in jails across the country. But Baldwin’s rage is tempered by, to evoke Jenkins’ 2009 debut film, the director’s medicine for melancholy. Jenkins never loses sight of the healing love that envelops them, diminishing the world of pain crushing these characters. If Beale Street Could Talk doesn’t go out in fireworks or with a sappy, self-congratulatory cure-all. It concludes quietly with a simple demonstration of human connection that can raise you up and move you to tears. It’s the sort of cinema that feels steeped in the past, completely of the moment and timeless all at once.