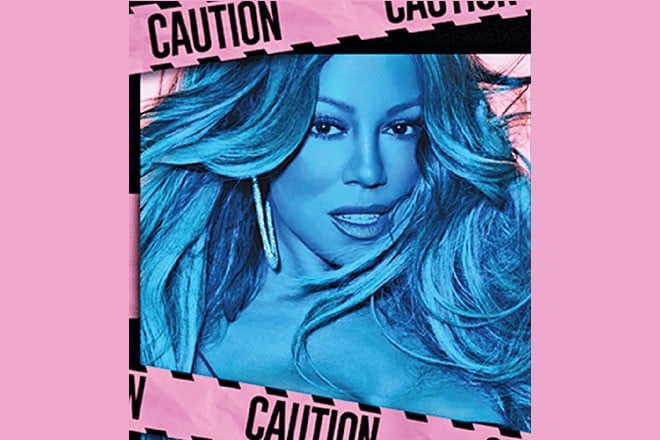 On her fifteenth album, Caution, Mariah Carey hasn’t gone for reinvention, nor has she tried to expand her sound palette or appeal to a wider audience. Instead she has made music her fans enjoy listening to and that she clearly enjoys making. It’s not a very exciting direction, but it does allow the singer to create some solid pop tunes within her comfort zone.

The album mostly offers sultry, mid-tempo R&B, thematically revolving around the topic of relationships, from being enamoured with a lover (‘With You’, ‘One Mo’ Gen’) to getting rid of someone who has done her wrong (‘GTFO’, ‘A No No’). And while the songs aren’t as immediate or timeless as some of her biggest hits from the ‘90s, they do seem inspired by the output from her heyday, and some even contain nostalgic references to the era.

The singer has worked with a host of writers and producers on these ten tracks, creating songs with the help of names as varied as Skrillex and Timbaland. But while these collaborators supply suitable beats or add their subtle touches to the tunes, they don’t often leave a very distinctive imprint on the tracks they helm. Instead, Carey - who has co-written and co-produced every song on the set - seems very much in control of the overall sound, seemingly comfortable in her established niche with no need to chase modern trends.

Mariah’s delivery is often soft and understated, and is just as effective whether she’s being dismissive on the sassy ‘A No No’ or enticing on the sultry ‘One Mo’ Gen’.

Caution may not be entirely unique or inventive or offer much versatility, but the album is smooth and cohesive, and certainly a step up from the American singer’s recent releases.

How many albums of covers can an artist possibly release? Well, if the artist is Michael Buble, then, as far as his fans are concerned, the answer clearly is "never enough". Because he has released yet another album of (mostly) covers and it has immediately landed at the top of the charts. Because of course.

The crooner’s tenth studio release, Love (stylized as the red heart emoji, because why not) features 11 tracks, nine of which are covers. The Canadian singer has, once again, revisited well-known standards and classics, offering his renditions of other artists’ hits with his smooth vocals backed by lush strings and grand orchestrations.

His take on the classics is sonically inoffensive and benefits from David Foster’s immaculate production. But while some of Buble’s versions - like the playful ‘Such a Night’ - are fun to listen to, it’s hard to deny the fact that we have already heard better renditions of these oft-covered songs before. Buble may be a skilled vocalist but he can’t match the tender beauty of Kris Kristofferson’s ‘Help Me Make It Through the Night’, Édith Piaf’s ‘La Vie en rose’, or Nat King Cole’s ‘Unforgettable’.

It’s the two originals on this set that really shine. With its wry lyrics and sparse arrangement, the Charlie Puth co-penned ‘Love You Anymore’ immediately stands out when you listen to Love, as does the touching piano ballad ‘Forever Now’ - the only song on which Buble gets a writing credit - an ode of unconditional love and support to a child, which is even more poignant given what the singer has been through in the last few years. You can tell that the latter comes from the heart, and the album needed more of that emotional resonance.

To the record’s detriment, the artist doesn’t take any risks on Love. The new material ends up being the most memorable part of this disc, and given how the singer has proven over the years that he can come up with compelling original songs - ‘Home’, ‘Everything’ ‘Haven’t Met You Yet’, ‘It’s a Beautiful Day’ - it’s a shame that he doesn’t create his own music more often. But the renditions he has offered here are, as always, pleasant, and if you are in the mood for some easy listening, especially if you are a fan of his covers, then you are bound to enjoy Love.

Highlights: ‘Love You Anymore’, ‘Forever Now’, ‘Such a Night’

While it has never been easy to reconcile Imagine Dragons’ mindboggling commercial success with the critical revulsion they have received, you could still make sense of the divide by acknowledging that despite their formulaic blandness, the band has, from time to time, managed to create the occasional catchy pop earworms. But whatever limited charm they so far possessed has completely run out on Origins, another set of electronic-flavoured arena pop that simply isn’t as slick as their initial work was.

Listening to the record from start to finish is a bit of a chore. Origins seems like it is coming from a band that is desperate to maintain their ubiquity but not very certain of their own identity. It’s as repetitive and derivative as ever, but also scattershot and disjointed. You’ve got the typically bombastic ‘Natural’, the industrial ‘Machine’, the folksy ‘West Coast’, and the synth-driven ‘Cool Out’, and next to no traction along the way. Frontman Dan Reynolds’s voice is completely ill-suited for ‘Zero’, which sounds like raspy vocals have wandered onto a teen pop tune.

The group has made their fourth album with a number of songwriters and producers, most prominently Mattman & Robin and Alex Da Kid. But seeing the speed with which they are creating this material (Origins comes one a half years after its tepid predecessor Evolve, 2017), Imagine Dragons seem to be in a hurry to release more music and unconcerned about its quality (or lack thereof). Sadly what they have come up with this time around is tediously repetitive and utterly forgettable.