Amar Palace, in Model Town, has been reduced to a barely kanal-and-half structure over time. It still offers a glimpse of its former glory, though 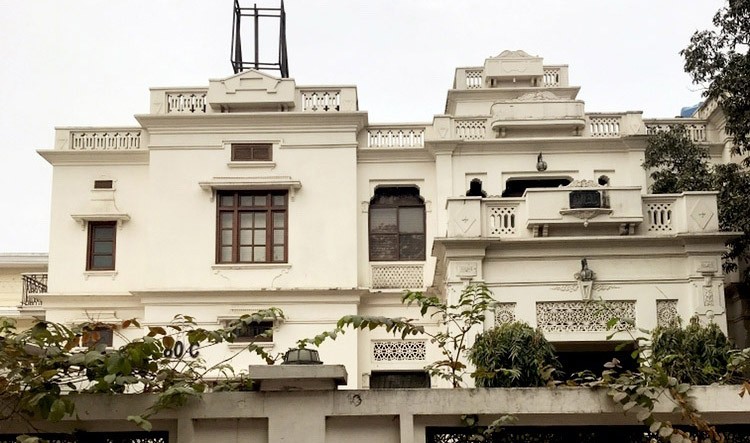 Model Town has been a significant part of Lahore’s history. At the time of independence, it was an upper-class Hindu majority area. Later, the Hindus and Sikhs left the city (and Pakistan) for India. Model Town was constructed under the supervision of Rai Bahadur Ganga Ram, a noted civil engineer and architect in British India. It comprised 10 uniform blocks, had no house with an area less than two kanals, some spanning even six kanals. It was rare to come across a 12-kanal house, though a few wealthy people had put together two six-kanal houses.

Today, as you find, many of those old houses have either been partitioned or redone completely, leaving little or no trace of their origins. Amar Palace is one such place. Originally, a haveli-like mansion that lay on a land of 12 kanals in C Block, the place has now been reduced to a barely kanal-and-half structure. Yet, it offers a glimpse of what the actual, grand structure would have been like.

Jamal Shafi, one of the current residents of the place, is proud of his family’s legacy. He opens a cabinet to reveal a chest full of old letters and documents. As I go through the brittle pieces of paper, I spot a few letters written by such big names in history as Muhammad Ali Jinnah, the Viceroy of India, and the East India Company.

The palace was owned by Jamal’s grandfather, Mian Muhammad Shafi, a noted columnist who was better known by his pen name Meem Sheem. All the letters are addressed to him. However, these are not the only documents Jamal has. He also shows me a map of the olden structure of the palace. I can spot a cowshed in a corner as well as rooms dedicated for storing animal and birdfeed. He explains to me how the palace was designed in a specific way, to keep the servants afar with different entrances that suited the needs of the Hindu Brahmin family that lived there before them.

The palace was built in 1931, in order to replace the one that had almost been crumbling. The said Brahmin family was involved in the business of making medicines. The house had a small production area at the back as well as three brick ovens that were used to make medicines as well as glass bottles. The ovens, much like many more features of the house, no longer exist.

The haveli was dominated by Hindu architecture. The rooftop, in particular, was designed to resemble the Congress flag. The silver, green and orange pillars also had an inlay of Asoka’s flag in the design.

Big gardens and a large fountain made up the front of the palace, while a large courtyard lay in its back side. Even though most of these features of the original have ceased to be, parts of the interior still exist. Raised roofs, ‘roshan daans’ and intricate golden patterns decorate the ceilings. The borders of these patterns are made with wood carvings which imitate a miniature form of battlement, which seems to resemble those at Rohtas and Lahore forts. I ask Jamal if the patterns are repainted ever, and he replies they do "but no one can perform the job these days, as it’s a unique feature."

The haveli was dominated by Hindu architecture. The rooftop, in particular, was designed to resemble the Congress flag. The silver, green, and orange pillars also had an inlay of Asoka’s flag in the design.

He also shows me a crudely drawn map of the house which is far more detailed. He says that the Brahmin family came to visit him in 1998. "They explained to us what each room was used for, and how the actual grand structure was built with a lot of detail to attention. The strong iron gates, for instance, which still exist, were transported from Mumbai."

Like Amar Palace, there are many other big houses in Model Town that boast similar stories, but their history too is fading fast. Here I am reminded of what Gandhi once said: "So long as there is a single Hindu or Sikh left who does not get his house back, I shall not rest… I shall say that the Hindus and Sikhs should go to Model Town and stay there. They can ask the Pakistan government to return them their houses and land just as they are." This showed how dear Model Town was to many. The properties’ division resulted in loss of grandeur of some of the houses in the town, which is likely to continue as such. Unlike British manor houses which are inherited by a single person, and their history is well maintained, in Pakistan, perhaps, this is not possible.