The story of lost heritage

With the spotlight on Kartarpur, it’s time we turn our attention to preserving the magnificent Sikh gurdwaras across Pakistan 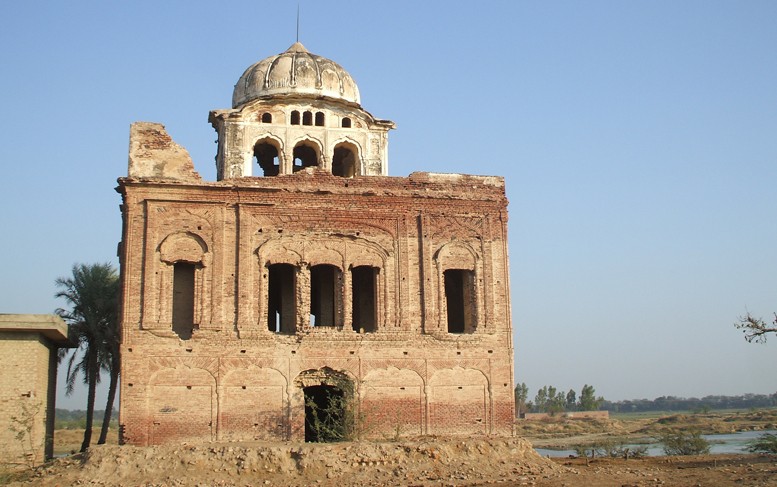 Far away from the spotlight of the Kartarpur peace corridor, on the outskirts of Lahore, close to the Pakistan-India border, is another gurdwara associated with Guru Nanak. With the village of Jhaman behind it, the thick foliage of trees in front of this historic Sikh structure obscures one of the most dangerous borders in the world. However, what’s not so obscure are the barbed wire and floodlights running along the Indian side of the border. One can see buildings of the neighbouring village, one of them is a whitewashed gurdwara which stands in sharp contrast to the rundown building on our side of the divide.

Jhaman, last on this historic route that connects several Sikh villages, was once significant. With the route closed, its significance too diminished. Just at a little distance from here, deeper into Pakistan, is the village of Bedian which was established by the descendants of Guru Nanak. Close by is another village Hair, where Prithi Chand, the elder brother of Guru Arjan built his shrine to counter the influence of his younger brother, the rightly-appointed Guru. A few kilometres further away is Gurdwara Dera Chahal, the maternal home of Guru Nanak that he often visited.

It is believed that on one of these visits to his maternal hometown, Guru Nanak visited the nearby town of Jhaman, where he sat on a mound of shards of pottery to pray outside the village. A gurdwara, called Gurdwara Rori Sahib (rori being shards in Punjabi), stands at the place. From Jhaman, Nanak is believed to have travelled to Sultanpur Lodhi, where he first had his spiritual awakening, now within Indian Punjab.

Presently, the Rori Sahib gurdwara - abandoned and dilapidated - is occasionally visited by village boys. The ground where once was the Thara Sahib, where Guru Granth Sahib was placed and recited, was unearthed in a desperate attempt to find treasure. Letterings, Subhan Allah, Ibadat sirf Allah ki karein and Allah O Akbar, cover the gurdwara wall, as if an attempt is being made to obliterate all traces of Sikh heritage.

But the dome on the top floor still retains magnificent frescoes that depict important moments in the lives of Sikh Gurus. There are pictures of Guru Nanak, Guru Harkrishan, Guru Ram Das, Guru Arjan, and Guru Gobind Singh engaged in battles. There are also paintings of Guru Gobind Singh along with his sons, Jujhar and Fateh Singh.

Despite neglect and vandalism, most of these paintings have survived, though not unharmed. The faces have been neatly chiseled off. It is obvious that human depiction at this Sikh gurdwara hurt the iconoclastic sensibilities of evangelists.

The situation in Indian Punjab is much worse… many historic structures have slowly been replaced by newer buildings. In many ways, the ‘un-renovated’ gurdwaras in Pakistan are some of the only Sikh gurdwaras that retain their architectural traditions.

The story of Gurdwara Rori Sahib at Jhaman is the story of numerous other gurdwaras across the country, abandoned at the time of partition, eventually to be taken over by someone or left to their own fate. However, even within these crumbling structures, the artistic splendour is hard to miss.

About 250 kilometres from Lahore, in a small town called Mandi Mangat, the remains of Gurdwara Bhai Bannu are a wonderful testimony to intricate artwork. The gurdwara is presently used by a local influential as his dera. Its structure is adorned with elaborate frescoes not just depicting Sikh epics but also Hindu deities such as Krishna with his flute and surrounded by his damsels.

There are similar drawings in the smadh of Maharaja Ranjit Singh in the precincts of the Lahore fort. The artwork decorating gurdwaras in Pakistan is a testament to the time when Sikhism was a much more fluid religion. Paintings of Hindu deities are completely unacceptable in modern-day Sikh gurdwaras around the world. Much like Hinduism and Islam in India, Sikhism too experienced a hardening of religious identity during the colonial period.

In Pakistan, where there are gurdwaras that are withering away slowly with time, there are also those that have received government attention and been renovated. The exterior of such structures is usually stark and freshly painted. From inside, in the name of renovation, the historic frescoes are usually whitewashed. This has been the situation at Nankana Sahib, Eminabad, Chuhrkhana and even Kartarpur Sahib.

While on the one hand it is essential to retain the sanctity of the shrines, renovate them and hand them over to their respective religious community, it is also essential to treat these structures as historic monuments, and make efforts to retain their architectural and artistic tradition. The situation in Indian Punjab is much worse, where while the structures are well-maintained and open to devotees all year round, many historic structures have slowly been replaced by newer buildings. In many ways, the ‘un-renovated’ gurdwaras in Pakistan are some of the only Sikh gurdwaras that retain their architectural traditions.

Kartarpur Sahib in this context is no different. With thez donations of the expatriate community, the gurdwara was renovated a few years ago. However, the purpose of all such renovations is to preserve the shrine’s religious significance and to make it sturdy enough to accommodate pilgrims. In the process it has lost it artistic value and most of the walls have been whitewashed.

Sikh gurdwaras must be treated as historic monuments. At this point this hardly seems to be the agenda of the governments in either Pakistan or India.

The story of lost heritage