TCF Boston’s fundraising gala last weekend will contribute towards more schools in Pakistan. This may be just a drop in the ocean, but each drop contributes to the ocean 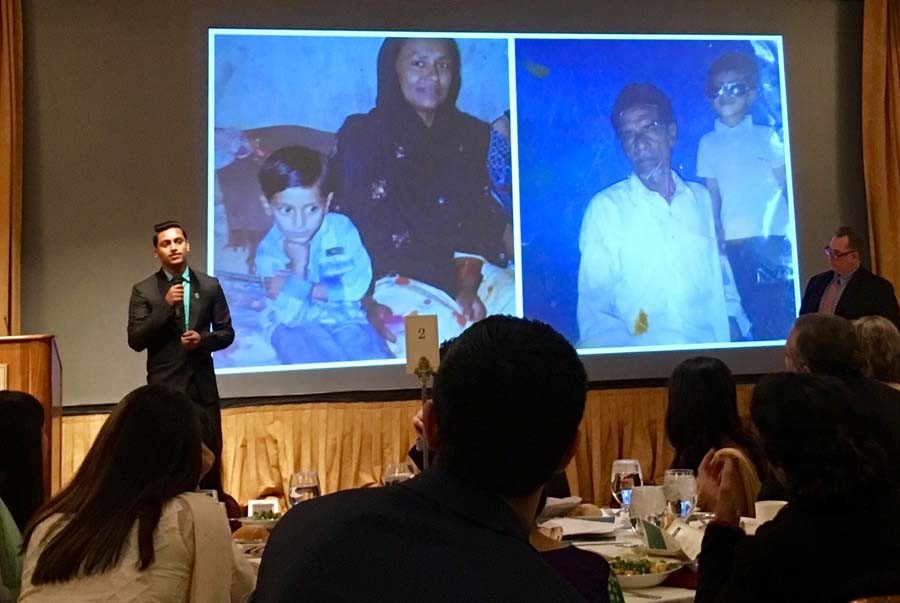 For Muhammad Noman, growing up in poverty with invalid parents in a low-income locality in Karachi, being forced by gentrification to relocate to another locality with no gas, electricity or running water, was the easy part.

It was in 2010, just after family moved to Khuda Ki Basti, the sprawling housing society on the outskirts of the city, that tragedy struck. Noman’s mother died of kidney failure. In 2011, his father, who had severe asthma, passed away.

"When you are poor in Pakistan, you don’t have access to the best medical care," as Noman understatedly put it.

His older brothers quit school and took up jobs to support Noman and their other siblings.

When Noman finally dragged himself back to school, his fifth-grade teacher Maryam Shafique pulled him aside. "I know you are sad," she told him. "But you can call me Ma whenever you like."

Doctors, lawyers, technology experts and financial consultants listened with rapt attention to Noman’s story at the fundraising Gala of Hope for The Citizens Foundation last weekend. Held at a chandeliered banquet hall at Boston University’s Metcalf Trustee Center, the event was sold out.

The annual fundraiser started in 2013 by TCF Boston, a relatively new chapter of the non-profit TCF-USA, draws mainly expatriate Pakistanis, most of whom have lived in the USA for decades. They carry American passports; their children and now grandchildren were born in this country. But their connection to Pakistan remains strong, evident in their children volunteering at the yearly event.

Noman stood before them, a slight figure with nattily brushed back dark hair and a jaunty manner despite his winning humility. Speaking confidently in fluent English sprinkled with a few Urdu words, the only time his voice betrayed a tremor was when he expressed his gratitude to TCF and its Khuda Ki Basti campus, the only school Noman ever attended in Pakistan.

When he walked by, before enrolling in TCF, Noman thought the building was a hospital. The only schools in his old locality were houses converted into money-making educational facilities.

The Khuda Ki Basti TCF School with its computer lab, library and sports ground, is everything a school should be, and more, says Noman. "It is the values and the teachers that make TCF what it is."

This year, TCF Boston raised a total of USD 788,000, including $600,000 for two schools. Several other, bigger chapters around the US have also been engaged in similar efforts over the years.

Their mentorship and guidance got him through those hard years. He won a scholarship to the United World College in Costa Rica, a country he had never heard of, for two years 2015-17.

Noman, who got a standing ovation, is currently a sophomore at Ringling College in Florida, majoring in digital design -- not engineering or medicine like most desi students -- and business.

Having started in 1995 with five schools, with its goal of affordable, accessible, and quality education for all, TCF now runs over 1,450 schools around the country like the one Noman graduated from in 2015. In each community, locals provide the land and help TCF construct the building.

TCF hires only female teachers, mostly from the community, and provides them with proper training. This helps increase women’s employment and encourages parents to send their girls to school, helping TCF to meet its goal of gender equality in education -- 50 per cent of its students are girls. The organisation also runs an adult literacy programme, aiming to "build the community, not just the individual".

At the Boston gala, a live auction by the persuasive Hank Morse, a radio host at WROR Boston 105.7, helped raise over USD 180,000 that evening. Two families also announced major donations. One is technology entrepreneur Hasan Ahmed and his wife Aliya, who are building a school in Lahore named after their granddaughter Aliana. Their first TCF school, the Ainoor Academy Campus, also named after a granddaughter, is already operational in Lahore.

The other announcement came as a huge surprise for retired Karachi-based teacher Nafisa Vaziri, visiting her daughter Masooma Bhaiwala in Boston. Masooma, a graduate of Karachi’s NED College of Engineering and her brother, prominent oncologist Dr Irfan Vaziri announced the Nafisa Vaziri Foundation School in Karachi in their mother’s name.

"We are ordinary middle-class people," said Masooma, "but when I got involved with TCF five years ago, I vowed that I would do this for my mother and began saving up. This year, my brother asked how much I had and put in the other half."

They recalled how Nafisa walked six miles each way, including in the heat of the Karachi summer, to give tuitions and ensure that her children got the best education possible. There was a standing ovation as she walked up to hug her daughter.

The evening ended on a lighter note with comedian Jeremy McLellan from Charleston, South Carolina, who had flown in with his wife and baby girl. Referring often to his friend Sultan, a dentist from Islamabad, McLellan has an unexpectedly Pakistani-themed routine rich with anecdotes from his visits to the country.

This year, TCF Boston raised a total of USD 788,000, including $600,000 for two schools. Several other, bigger chapters around the US have also been engaged in similar efforts over the years. All children have the right to education, enabling and empowering them to reach their full potential. Thanks to the efforts of TCF and other such organisations, young people like Noman have a chance to go beyond playing in rubbish heaps and spending their days in squalor.

But all these efforts are a drop in the ocean given the sheer number of out-of-school children in the country, over 22 million. In this scenario it is only the government with its huge reach, and responsibility, that can really fill the gap.

TCF’s partnership has begun partnering with the government since 2016 and has taken over and improved over 80 public schools so far. But until Pakistan drastically increases its spending on education as a percentage of GDP, currently among the lowest in the region, the goal of quality education for all will remain frustratingly out of reach.