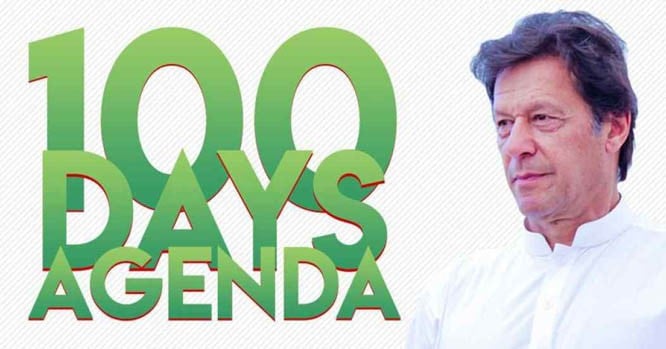 In May this year, the Pakistan Tehreek-e-Insaaf (PTI) released its 100-Day Naya Pakistan reforms plan. Facing a skeptical nation eager to believe, and hungry for change, PTI wasted no time, embracing the populist tone during the build up towards the general elections in July. In their ‘contract with the Pakistani voters’, the PTI candidates promised to promote no fewer than 49 reforms spread across six themes within the first 100 days of their party’s government.

In the weeks and months that followed after the party came into power, Prime Minister Imran Khan and his party continued to tout their ability to get things done, promising on numerous occasions that the 100-day reforms plan would be unlike any other government of the past.

Three months later, it seems as if the PTI’s 100-day reforms agenda was unique in itself. But these first 100 days have been anything but smooth and for the better part of it the government would prefer its voters to forget and ignore it.

Like with any new dispensation, there’s a learning curve but for Prime Minister Imran Khan and his team, it has been steeper than others. A dispassionate view of their performance indicates the presence of an intention but the lack of coming to grips with reality. Whereas, the progress made on social welfare, governance, national security and the strengthening of the federation are open to debate, the economic landscape shows a grim reminder of what all the previous governments have been doing wrong and the follies of the current government.

To break it down for the layman, the Pakistan Stock Exchange, KSE-100 index has almost lost around 1,600 points which translates into losing approximately 4 percent of its value, inflation has increased from 5.84 percent to 7 percent, the Pakistani rupee compared to the US Dollar depreciated to Rs139 from Rs122.5 as of August 18, unemployment ratio reached 9 percent as against the official claim of six percent petroleum prices have seen an increase with petrol price rising from Rs95.24 per litre to Rs97.83, the current account deficit has increased to $950 million from $590 million, the State Bank of Pakistan’s benchmark interest rate has increased from 7.5 percent to 10 percent, the trade deficit has increased from Rs$2.9 billion to $2.93 billion per month, foreign reserves have fallen to $14.7 billion from $16.72 billion, and the country’s debt and liabilities surged to Rs31 trillion.

With the numbers giving out a dismal performance on the economic front, analysts dismiss the 100-day concept as "a ridiculous standard" set by the party for itself. But given the promises were directed towards the social uplift of majority of the population and the deep frustration with the 100 days reform agenda among the voters who voted for change, Prime Minister Imran Khan and his party have been spinning around alibies and shying away from completely rejecting this historic benchmark. In the heart of hearts, they fear that an all-out rejection of the idea of the 100 days may profoundly damage their political standing in the months and years ahead.

Eminent economist Hafeez Pasha worries the situation presents a potential Arab Spring like movement. "Educated youth are mostly not getting jobs and more than a seven million youth are idle in the country," he said. "In order to achieve its target the government should target low hanging fruits and should leverage CPEC for the creation of more than 200,000 jobs."

It’s understandable that promises are usually easy to make, but a lot harder to deliver especially in the socio-economic and political environment of the country. Leading economists like Khalid Mirza, ex Chairman and Chief Executive of the Competition Commission of Pakistan, still believe that it is hard to give out a verdict on the government’s performance for its first 100 days and that the government should focus more on reforms throughout its five year term. "In my opinion the government is taking the right initiatives which will prove to be economically beneficial for the country in the long run," he said. "However, if the current trend persists for a considerable time, many might either get frustrated or may have to opt out of the promised Naya Pakistan theory that failed to bring the wells of promised milk and honey."

The government needs to invest its energies into reviving the economic indicators. Assuring a good economic environment will be beneficial for them to set the mood for all other reforms they have promised.

According to the party’s 100-day plan, the government is supposed to create 10 million job opportunities for the youth, for which a revitalised economic model is essential.

Eminent economist Hafeez Pasha worries the situation presents a potential Arab Spring like movement. "Educated youth are mostly not getting jobs and more than a seven million youth are idle in the country," he said. "In order to achieve its target the government should target low hanging fruits and should leverage CPEC for the creation of more than 200,000 jobs."

According to a World Bank study the country has to elevate to a minimum of 8 percent growth rate on annual basis to achieve an economically viable environment. Furthermore, the GDP or the investment rate, which stands at 15 percent, should be up to 25 to 30 percent. The government should double commercial loans to SMEs to more than 15 percent, bring down the fiscal deficit to less than 4 percent of the GDP and increase foreign direct investments to more than 3 percent of the GDP by improving the investment climate of the country.

Also read: The mathematics of change

Agreed that the economic environment the PTI government inherited was far from ideal which is reflected in an anaemic economic growth in the first 100 days. Whereas, the 100 day agenda is a standard of excellence used by an executive to set out the right strategic priorities and stay focused on them, but its spectre should not haunt the current government for the rest of its tenure.

To rectify this situation, Prime Minister Imran Khan’s economic team would do well to abandon their political posturing and recognise the gravity of the situation. It is to be recognised that real achievements in this regard will be their performance during their 5-year tenure which will be taken as a milestone and not the 100 days haywire sprint towards reviving the economy. In the words of Franklin D Roosevelt, "This nation is asking for action, and action now".