A sort of miscellany

Instead of talking of parallel universes, wouldn’t it be much better to solve our problem ourselves? 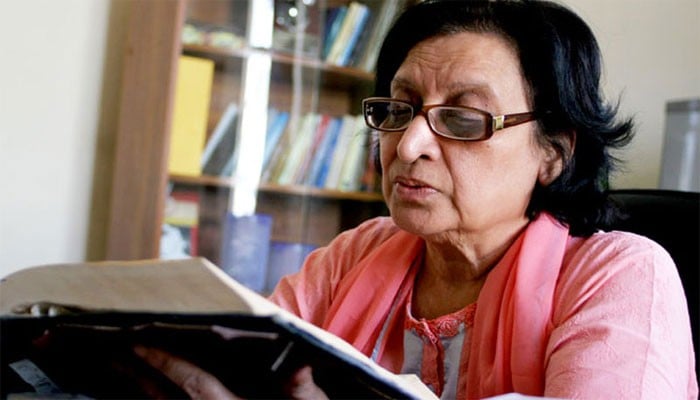 Finally Fahmida Riaz’s life, enmeshed in small and big tragedies, is over. A voice, which through poetry and fiction, expressed defiance and protest as well as the subtle and endearing facets of human relationships, has fallen silent. There have been other women poets of note during the last seven or eight decades, like Ada Jafri, Zehra Nigah, Parveen Shakir, Sara Shagufta, Nasreen Anjum Bhatti, Tanveer Anjum and others but they didn’t voluntarily write fiction. Ada Jafri did write an autobiography. The cynics sometimes say that every autobiography is fiction in another guise. It may be so. However, Fahmida does stand out for the variousness of her concerns. It is earnestly to be hoped that she will be remembered and revered.

I can’t help recalling another exceptional talent. Nasreen Anjum Bhatti wrote some fine and outspoken poetry both in Urdu and Punjabi. It will only be fair to say that her poems in Punjabi touch a deeper chord. After all, what comes naturally has more resonance. Even so, her Urdu poems are unlike most poetry written in Urdu now. They have a bleached grandeur as if the unforgiving light of harsh realities has penetrated the warp and woof of the language.

Two bright spots I can turn to. The rest of the situation around us, particularly the social or political scene, is gloomy. It seems that we have collectively entered a blind alley. Nothing subsists, of course, for long. Things break down completely and sometimes, purely by chance, the wholeness is restored. What happens in the world is not always logical. If it were so, a world based on reason would experience no wars. Those who initiate a war assume right away that they will eventually triumph. When they can’t achieve what they set out to do there is bound to be great bitterness, bringing death and destruction and moral apathy in its wake.

What is it that makes human beings so aggressive and ruthless? Occasionally the aggression turns inwards masochistically. Perhaps overpopulation, which results in overcrowding, ushers in levels of discomfort which in turn cause boredom, meaninglessness and alienation. To misbehave looks like an act of freedom, a show of willfulness. Crime becomes an unfailing formula for a crazy happiness.

One would be inclined to think that those who express their genius through poetry are likely to show more resilience and steadfastness. Shelly said that poets are the unacknowledged legislators of mankind. But who will place any trust in them when so many are victims of anxieties and delusions, unable to withstand existential pressures and, in some cases, driven to suicide. The number of suicides could be regarded as impressive if it were not so terribly wrenching: Hart Crane, John Berryman, Sylvia Plath, Yesenin, Mayakovsky, Tsvetayeva, and back home, Shakeb Jalali, Sara Shagufta and Sarvat Husain. It is not a complete list. Only a few names I could instantly recall. It is strange that all the three Pakistani poets mentioned here chose to die like Tolstoy’s Anna Karenina, throwing themselves under a train. What despair indeed, which we can’t fathom, incited them to put an end to their lives.

There is something reprehensible about human beings in general. It deserves no exoneration. Their greed to occupy, seize, kill and destroy is without any limit. They are envious, short-sighted, unforgiving and egotistical. A creature to be feared, as the fauna and flora of the world have learned to their cost. When the first men landed on the moon, Ray Bradbury, one of the finest exponents of SF, wrote: "If I were a Martian I will start running now". The arrival of human beings anywhere, still unoccupied or poorly defended, hoists a sign indicating present and clear danger. The old stories of possession by ghosts, jinns and diverse evil spirits no longer have any meaning. It is we who are possessed by our own demons who lurk in the dark corners of our psyche.

Are we possessed or merely governed by a force or forces whose intentions we can’t divine. Peter Sloterdijk, professor of philosophy at the Karlsruhe School of Design, says something quite interesting: "Every advanced culture is based on the idea that an external observing intelligence exists that is able to comprehend all life processes synchronously, even those that hide away in the darkness of ignorance or ill will." It reminds one of Cavafy’s unforgettable poems, ‘Waiting for the Barbarians’. An effete but still well-off metropolis, unable to solve its problems, awaits the arrival of the barbarians, -- so often assumed to be powerful, ruthless, masculine and uninhibited, all the qualities that a decadent society lacks -- hoping that they will decide what is to be done, passing on, so to speak, the buck to the barbaric horde. In the end dismay grips the expectant and decked out crowd. Not only there is no sign of the barbarians, there are intimations also that they simply don’t exist. Like learning that an external controlling power is not there anymore.

The poem also suggests, indirectly, why despotic monarchs and dictators succeed. There is an insidious charm about them. The populace, often a victim to decidophobia, become content that henceforth someone, as a supreme authority, will tell them what to do, what not to do. It is a relief to be free of the nightmare of making existential choices. Perhaps this is why there are people around who dream of the arrival of far superior extraterrestrial beings who will set things right for us. They forget the old adage: "beware of strangers bearing gifts."

Will we ever be visited by aliens from a distant star system? It is like asking for the impossible. The distances within our own galaxy are mind-boggling. Out there are millions and millions of other galaxies and the universe appears endless. We can’t understand why such a vast universe was created. And now there is talk of parallel universes. Much better to solve our problem ourselves. Worth a try, isn’t it? Unfortunately we are busy wrecking the only place we can live on in the solar system. We, greedy and insatiable, want nothing but money and more money. A day of pitiless retribution may be in the offing. Did Oliver Goldsmith also have us in mind when he wrote these lines?

‘Ill fares the land, to hastening ills a prey,

where wealth accumulates and men decay’

A sort of miscellany