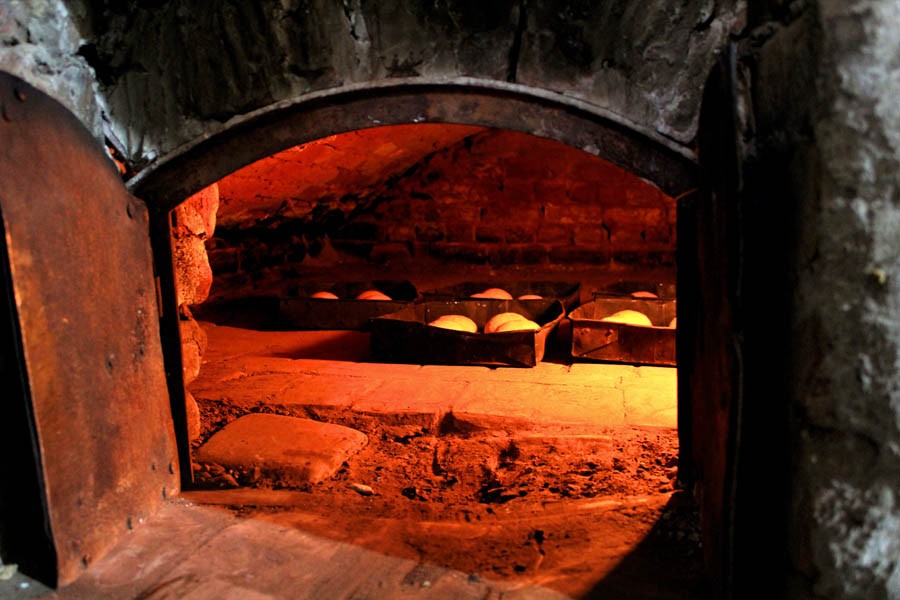 Ghulam Haider’s bakery was initially a moving one. On a bull cart, the brick oven used to be placed, and his ‘bakery’ would move along with the British. His recipes are those that he was taught, which to this day remain. Nothing added, nothing less.

Haider, more popularly known as "Babaji" to many, passed away in the year 2009, at the age of 108. After his death, his son Shaukatullah took over the shop which his father had set up. Babaji first came to Lahore in 1924 and initially set up his bakery on Beadon Road, at a time when The Mall was not even paved. He later moved his bakery to Cantt in the 1960s, of what remains till this day a nameless bakery, often referred to as "Babaji’s bakery," or "Babaji brown bread walay."

The bakery, which can be found near Rahat Bakery, on a street off Sarwar Rd, is a single-storey, colonial-era building. Situated between residential houses, the single-storey structure of the bakery appears rather unimpressive. In the glass window, a piece of paper is displayed, upon which a phone number and the word bakery is written in Urdu.

Through the murky windows, the fire in the brick oven can be seen burning, preheating it for the bread to bake. Shaukatullah opens the door and draws out the pans using a peel, a shovel-like tool. Deciding they aren’t ready as yet, he opens up the oven door again to put them back in. There’s no dial to pre-determine the heat and time that the buns must bake for, no precise method, so Shaukat must open up the door multiple times to check on the buns, to make sure that they don’t burn.

It’s all a matter of experience and practice which allows him to carry out this ancient method of baking. Over the years, he has many times tried to hire help but everyone quit, as the work is wearisome and time consuming, and often risky as it tends to burn.

As you step inside, the place seems even more ancient and time worn than it does from the outside. Brick walls, from which paint has been stripped away over time, stone floors with craters in them, and a ceiling panelled with wooden planks, describe the interior. A wooden table and some trunks lie in a corner. Shaukat says his father paid a rent of 4 annas to have them shifted from Badami Bagh, back in the day. He still has the same iron bread moulds that his father used. He carefully oils each pan as they need a lot of maintenance so that they don’t rust.

In the back end of the room, is the brick oven. It’s like a tiny room enclosed within the room, large enough to bake 90 loaves of bread at the same time. Initially, it used to be operated using firewood, but Shaukat has complied with modern times and has converted it into a gas operated oven. Even though the process of lighting the fire has become easier, the maintenance and handling of a brick oven is quite technical.

Before baking, the bhatti (brick oven) has to be pre-heated by turning all the burners on for two and half hours. Once it is heated, only one burner is left on. Once Shaukat puts the unbaked items in the oven, he has to continuously supervise them. With the age-old oven being unpredictable, the bread could take up to an hour or even hour and a half to bake. He sweats even during winters, sitting in front of the fire. He checks over and over again to see if the bread is ready. Once it is, determining by the golden brown colour, he lays it out to cool. He has to use his judgment. Not everyone can handle the brick oven.

The first brick oven in the bakery had to be remade in 1980, when it started to break down. The base of the oven is made of glass and thousands of kilogrammes of salt. Bricks are then put on top. It takes around 40 years for the salt part to fall apart; it is then that the oven is remade. Shaukat says he plans to rebuild the current one soon, as it is once again starting to fall apart.

According to him, it was during the British Raj that Baba bakery’s business thrived. Having quite a different clientele back then, the bakery made all sorts of products on order, including Champagne cake. The same recipe has now champagne substituted by honey. Other than that, not much has changed in the bakery. His products consist of brown bread, various biscuits which include ginger biscuits and those made out of bajra (millet) and gurr (jaggery). His bakarkhanis, rusks, and cakes are also made on order.

The same products which his father baked are still made to this day. Babaji, having a problem of diabetes in his family customised some recipes for the diabetic. This continues to this day. "If I change any of the recipes and put sugar in them, I’ll be destroying my father’s legacy," Shaukat says.

However, no matter how much work he is putting into the business, it’s not earning him much revenue. With premium and pure products being used, such as butter instead of margarine, he is able to break even when he sells 90 loaves of bread, which can be a challenge.

Shaukat is stuck in a vicious cycle. He says that in his father’s youth, all the bread that was made in a day would be sold out, which is not so today. People either do not know of his shop, or even those who do come to check it out of curiosity, leave when the see the rundown and shabby interior. Because of this, customers often question his hygiene standards as well, which results in reduction of sales.

If he had the money, Shaukat says he is willing to improve the shop’s condition. But being able to hardly meet costs, he finds it difficult to install display counters and redo his shop.

As he tells me all this, he has already checked the gurr buns twice, and has even let me take a peek into the big oven. The heat is tremendous and I can see the fire burning towards the side. When the buns are ready, he hands me a scalding roll. As it cools down a bit, I can smell the freshness of the crispy bun. I bite into the soft texture, and the sweet flavour is absolutely delicious. That’s the legacy of Babaji brown bread walay!