The fate of Tollinton Market, which has been left but a ghostly shadow of its former self, hangs in the balance thanks to bureaucratic neglect and a major land dispute involving Lahore Museum and NCA 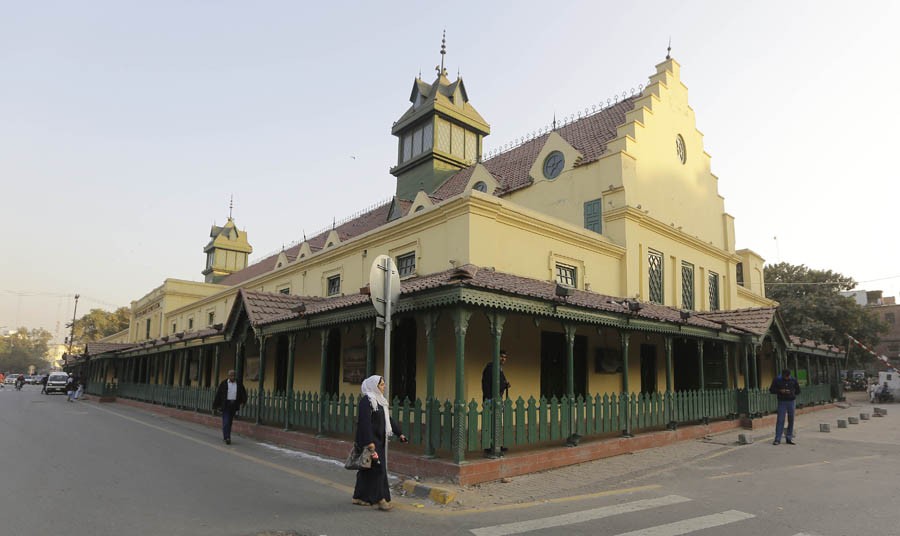 Dr Ajaz Anwar, artist and conservationist, stood in front of a wall in The House of Nanna, a quaint, two-storied space he has built in the suburbs of Lahore. The wall is filled with printouts of a calendar he published in 1997. On each of the page there is either a picture or a painting of Tollinton Market, which reads: "Save Tollinton."

He points towards a painting, titled ‘Gambit,’ which is a detailed illustration of Tollinton in all its former glory. Men, women, horse carts, bicycles, and cars seem busily in motion in front of it. Vegetables and fruits are being sold, business is booming, and the market is heavily occupied. On the upper right side of the building, it says ‘Tangiers.’ "It was one of the earliest places to serve milkshakes in Lahore," says Dr Anwar, who is also the Information Secretary of Lahore Conservation Society (LCS). "The chips in the floor of the restaurant also had Tangiers written on them."

He then points towards the side of the building not visible in his painting: "Right there was a sign that said, ‘Chains for dogs.’ In front of the building there were a newsstand and a parking for bicycles. Close by, there stood a huge, beautiful banyan tree. "People really loved the place," he says with a sigh.

Today, the Tollinton building on The Mall is a ghostly shadow of what it used to be; far, far different from the one illustrated by Dr Anwar in his works. The building may still exist but it has definitely not been saved in its entirety. What’s more, land disputes have restarted, making its fate uncertain.

Tollinton Market was initially built in 1864 as the First Punjab Exhibition Hall -- a temporary building constructed for an exhibition of handicrafts and manufactured goods. Once the exhibition was over after a few months, it was decided that the many artifacts and exhibits would stay in the building and keep it in use as the Lahore Museum.

The Museum occupied the building till 1980 after which it was moved to its present location. Earlier, the exhibition hall was turned into a market in 1920 by Sir Ganga Ram, and named ‘Tollinton Market’ after H P Tollinton, Punjab’s secretary of the time. It fast became one of the city’s most popular places. "It was [the] earliest superstore of Lahore," says Dr Anwar, who later fought hard with the government for its existence. "People went there for its eateries, and its departmental stores and all household grocery items."

In 1993, it was decided that the building be vacated as a cleanliness drive because poultry dealing had ruined the area robbing the much loved place of its original charm and replacing that with an unclean environment and unbearable stench. Mercifully, plans of demolishment were successfully averted, thanks to strong resistance put up by the LCS. The battle lasted for five years -- from 1993 to 1997 -- with the Lahore Development Authority (LDA) and municipal government on the one side, and the LCS on the other.

The Tollinton, rechristened The Lahore Heritage Museum, is in shambles. Its roofs are infested with termites, there’s the problem of seepage, and when it rains, it pours inside.

The building lay empty for years before plans were made to restore it. "In 2003, I was hired as a private consultant [for the purpose]," says Sajjad Kausar, a known architect and conservationist. "The plan was to divide the former market into two areas, with one being an exhibition hall and the other an arts and crafts marketplace."

However, in 2005, when the building was completely restored, plans changed. According to a source within the Lahore Museum management, who spoke on the condition of anonymity, those running the museum requested to be given the space. They quoted lack of space as a major impediment in running the museum efficiently. And the space, which was restored for something completely different, was handed over to the museum.

The Tollinton, rechristened The Lahore Heritage Museum, is in shambles. Its roofs are infested with termites, there’s the problem of seepage, and when it rains, it pours inside.

Soon after the restoration work was complete, the Pakistan Horticulture Authority (PHA) decided to light up all historical buildings on The Mall. When workers climbed up the roof of Tollinton for the purpose, most of the terracotta tiles broke off and still remain in the same condition. "Around 250 tiles are broken right now," says the source at Lahore Museum.

Uzma Usmani, an art keeper at the museum, says that the building is used around eight times a year to display the theses of the students of the National College of Arts (NCA) and other educational institutions, besides for renting out commercially.

"It’s in its [present] state because it wasn’t restored using the best quality materials; from day one, there have been problems of termites and leakages," she adds.

Kausar, who is also the former principal of NCA, attributes the condition of the historical place to the fact that it stays closed for most of the year. "It’s said that a building in use is best preserved," he comments.

Closed rooms accumulate humidity which is an ‘ideal’ environment for termites.

Kausar says that conservation is an ongoing process and after restoration, there must be a maintenance plan in place. Sadly, the museum had no funds for that.

More recently, over a board meeting, NCA requested to be given the authority of the former Tollinton Market. Behind the building there is an empty plot which is also the only area for parking both for the visitors of the museum and the students of NCA. "They don’t care about the building at all," says the source. "They just want to take over the land for parking."

Usmani feels the present land dispute is extremely unfortunate because the area belongs to the museum. "We already don’t have space for our reserves here, so we use the building as a repository," she says. "Even if the building has managerial issues, a third party just cannot take over."

She further says that termites are not just Tollinton’s issue but that of all historical sites in interior Lahore.

Prof Dr Murtaza Jafri, Principal of NCA, denies the allegations that the college administration is interested in the land behind Tollinton’s building. "When the government put forward plans of demolishment of the site to create a parking plaza, it was NCA that protested against it in the streets," he says.

"In 2012, it was the students and faculty of the college that painted and helped to restore the building."

Dr Jafri adds that the college has requested the government of Punjab to give Tollinton ownership to them because they boast conservationists and architects, and also have the capacity to revive and look after the place.

He further says that the Lahore Museum has reduced the historical site to junkyard. Besides, due to negligence and under utilisation, the place is falling apart.

"The construction of the place is such that if it’s not regularly opened, there is no cross ventilation, and a certain temperature is not maintained, it will collapse."

According to Dr Jafri, it has become a federal and provincial issue. The Lahore Museum being part of the Punjab government and NCA belonging to the federal government has complicated the situation. However, "NCA has the capacity to restore it, and utilise it, and make it into another arts centre like Alhamra."

In the final analysis, the Tollinton of today may not have Tangiers, or the newspaper stand and the huge, beautiful banyan tree that Dr Ajaz Anwar painted, but the building could still be saved from becoming a relic. Unless responsible decisions are made at the bureaucratic level, the building won’t last for long.