Peter Travers
In the picture
December 2, 2018 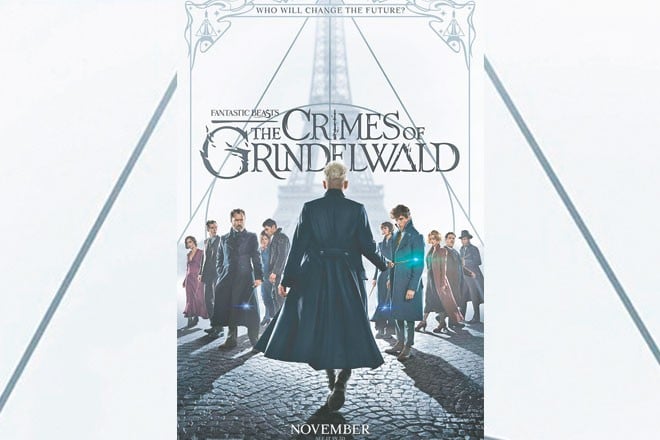 Second of J.K. Rowling’s Potter-prequel franchise doubles up on the plotting and gives us a blond Johnny Depp -- but it’s a fans-only affair; New animated take on the Dr. Seuss classic -- featuring Benedict Cumberbatch -- won’t make you green with envy.

So where were we?

When we left off in 2016’s Fantastic Beasts and Where to Find Them, a Harry Potter prequel from J.K. Rowling herself, Hogwarts magizoologist Newt Scamander (Eddie Redmayne) -- the dude who keeps a menagerie of fantastic beasts  in his enchanted suitcase -- helped capture the dark wizard Gellert Grindelwald (Johnny Depp) who’d been running amok in New York. But the bad guy doesn’t stay imprisoned for long. For this sequel, set in 1927, the evil shape-shifter is up to his old tricks trying to ensure the dominance of pure-blood wizards over humans with racist rallies (Trump allusions are strictly intentional). A mega-creepy Depp, blonded up and loving it, is Aryan brotherhood personified. What to do with this Nazi-like threat? Through the fog on a bridge in London, local boy Newt gets a surprise visit from a younger Albus Dumbledore -- a canny, charismatic Jude Law as the Hogwarts professor -- who gives our hero a mission impossible, if he decides to accept it: Go to Paris and end the Grindelwald menace.

In the second of her planned five-part, Fantastic Beasts franchise, Rowling is still heavily laying on the exposition. Unlike the first film, which cleverly used Newt’s alien creatures as an attack on Trump’s anti-immigration policies, the sequel concentrates on building up Grindelwald as a budding Voldemort and Newt as his unlikely nemesis. Redmayne, acting with a bouncy mop of hair and a charming squint, still seems eons away from becoming the conquering hero. And what about that mountain of unfinished business he has at home in London? His brother, Theseus (Calum Turner), is now engaged to Leta Lestrange (Zoe Kravitz), Newt’s dream girl back at Hogwarts. So there’s that, plus Newt getting together his team, which includes magic investigator crush Tina Goldstein (Katherine Waterston) and her flapper sister Queenie (a sassy Alison Sudol), a telepath beloved by Newt’s Muggle friend. Jacob Kowalski (Dan Fogler). Also needing finding is Credence Barebone (a moody, mesmerizing Ezra Miller) a half-blood who’s drawn to the dark side by a parasite inside him called an Obscurus.

If that’s not obscurus enough for you, there’s also Credence’s companion Nagini (Claudia Kim), a circus freak who can turn into a snake. You’ll need a paddle to negotiate the tidal wave of characters and plot developments. But the scope of Rowling’s imaginative reach cannot be denied. And as the film inches closer to Potter territory, the pulse quickens. High marks to the returning David Yates, who directed the first Fantastic Beasts and the final four films in the Harry Potter series, for trying hard to bring a cinematic force to the occasionally meandering storytelling. The visual effects improve on the first film, especially during Grindelwald’s jailbreak with the help of a flying horse called Thestrals. It’s too bad that the cutie-pie beasts of Bowtruckles and Nifflers are more fair to middlin’ than fantastic. But not you Kelpie, the seaweed dragon -- you’re a keeper.

At 134 minutes, Grindelwald can feel like an overload of homework on which we’ll we tested later. Fine for Pottermores, but a trial for us Muggles. Rowling drops intriguing hints that suggest livelier Beasts chapters to come.  "We were closer than brothers," says Dumbledore of his relationship with the villain, a teasing allusion to the prof’s homosexuality. And the themes of racism and dictatorship in this period between two World Wars resonate disturbingly for today. The twists get twistier as the film hurtles toward an exciting climax at Paris’ Pere Lachaise Cemetery. But the getting there, which should be half the fun, turns out to be a bit of a slog.

Here’s the perfect, computer-animated holiday fun for kids of all ages -- preferably under five, when bright, swirling colors are all we need to distract us. Older children are apt to be skeptical. And anyone past voting age may need to be seriously stoned to swallow it. Don’t get me wrong: It’s not that the story can’t be done right outside of the classic 1957 Seuss book. The gold standard remains the wickedly whimsical 1966 TV version from director Chuck Jones, with an unapologetically nasty Boris Karloff voicing the mean, green Xmas-hating machine. And the latest Grinch is nowhere near as insufferable as Ron Howard’s 2000 live-action How the Grinch Stole Christmas with Jim Carrey hyperventilating (don’t call it acting) as the G-man.

This new version from Illumination Entertainment -- best known for Despicable Me and Sing -- adds an hour of stuffing to a film that’s designed to offend no one or stick in the memory more than a few seconds after you see it. Voicing the Grinch this time is Benedict Cumberbatch, the brilliant British star of Sherlock Holmes using an American accent. Which begs the question: Why not just hire an American actor? Were Bill Murray and Bill Hader not available? Just sayin’.

In any event, the Grinch is still green but way less mean in his latest incarnation. Those expecting Cumberbatch to add a little Dr. Strange to his take on Dr. Seuss will be sorely disappointed. Directors Scott Mosier (making his feature debut) and Yarrow Cheney (The Secret Life of Pets) play it safe straight down the line. Yes, he will dress as Santa Claus to steal all the goodies. But how to make a whole movie out of that?

You don’t, so the script by Michael LeSieur and Tommy Swerdlow brings on the padding. The Grinch gets a backstory to explain how he got grinchy. To humanize him further, there’s Cindy-Lou Who (voiced by Cameron Seely), a cute tyke with just one request for "Santa" (you-know-who in disguise): Make a better life for her hard-working single mom (Rashida Jones). Try objecting to that.

To add to the modern touches no one asked for, Tyler the Creator becomes the Grinch’s rap surrogate ("All them smiles homie, I turn ’em to frowns / All them decorations, I tear ’em down") and Pharrell Williams offers a rhyming narration. Theodor Geisel, aka Dr. Seuss, died in 1991, sparing him having to endure the alleged improvements to his classic. Still, there’s no denying that The Grinch offers a solid service to anyone with kids in need of a nap under a blanket of bland.