Of goodbyes, reunions, and disappointments 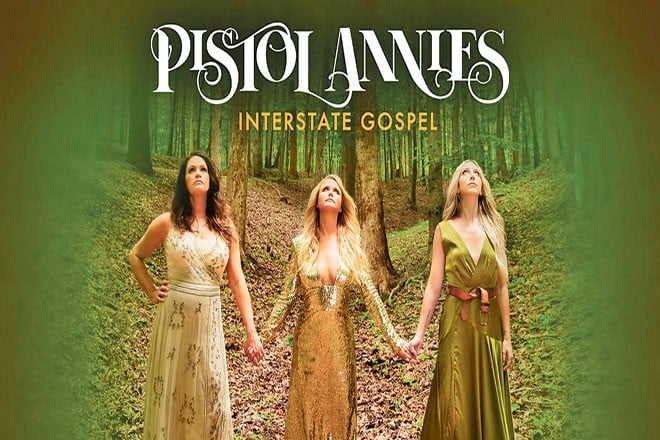 Interstate Gospel is intimate and affecting, confident and honest; Mumford & Sons seem to have lost themselves on Delta; Boyzone’s Thank You & Goodnight is a pleasant final record and makes for a satisfying farewell.

After a temporary hiatus attributed to their busy solo careers, Miranda Lambert, Ashley Monroe, and Angaleena Presley have regrouped and created another Pistol Annies record. Interstate Gospel finds the Nashville lasses coming up with more sassy music in keeping with the spirit of classic country, using their wry wit to reflect on their woes and deliver some fine country tunes.

The trio’s strength lies not just in their individual prowess but in how well they work together and complement each other. And the supergroup’s third album certainly puts the talents of its three skilled vocalists and songwriters to good use, impressing with its lovely melodies, beautiful harmonies, sharp lyrics, twangy guitars, and confident attitude.

The ladies process their breakups, losses, and disappointments in these 14 songs, turning their battles scars into bittersweet anthems of persistence and defiance.

From reclaiming a maiden name following a divorce in the feisty first single ‘Got My Name Changed Back’ to addressing someone behind bars in the haunting ‘Commissary’, the singers seem on a mission to exorcise toxic relationships.

Imbued with flavours of honky tonk and bluegrass, Interstate Gospel is intimate and affecting, confident and honest. The Annies paint portraits of complex, often flawed women, putting an interesting spin to their tales. And while their work may not be musically adventurous, its traditional-leaning country is, in fact, a welcome reprieve from its more pop-minded mainstream counterpart.

Highlights: ‘Stop, Drop and Roll One’, ‘Best Years of My Life’, ‘Interstate Gospel’, ‘This Too Shall Pass’

Mumford & Sons seemingly set out to create stirring ballads but have instead ended up drowning in a sea of monotony on Delta. Produced by Paul Epworth, the British band’s fourth album sees them trading their earthy banjo-driven sound for synthetic beats and vocal effects. But their search for a wider audience ends up leaving them stranded in dull mediocrity.

There is still the standard brand of earnest emotions on offer, with songs dealing with death (‘Beloved’), divorce (‘If I Say’), and darkness (‘Picture You’), although at times the sentiments are so vague that it’s hard to tell the song’s actual intent.

The only track that captures the group’s old folk pop style is leading single ‘Guiding Light’. Elsewhere, Marcus Mumford and co. try to seek gentle inspiration from R&B, hip hop, and electronic sources but what they create often ends up seeming formulaic and forgettable. The album’s most eclectic song, ‘Darkness Visible’, is a curious beast; it is Delta’s most interesting track while simultaneously being completely out of place on this set.

The closest they come to successfully incorporating different elements into their sound is on album closer and title track ‘Delta’. And the gentle ‘Forever’ works until vocoders distractingly take over the tune towards the end.

Instead of building on their strengths, Mumford & Sons seem to have lost themselves on Delta. The modern production doesn’t elevate their material and simply makes them seem very middle, of the road. And while you can give them points for trying to experiment with their sound, what disappoints is that the experiment hasn’t yielded very exciting results.

Between the Spice Girls regrouping and Westlife reuniting, British pop music seems eager to take us back to the ‘90s. But while their cohorts are making comebacks, popular ‘90s boy band Boyzone have chosen instead to say thank you and goodnight.

Ronan Keating, Michael Graham, Keith Duffy, and Shane Lynch have come together one last time to create a final album (for now?) before calling it a day (again). And to their credit, the group haven’t tried to just capitalize on the powers of nostalgia here but have instead embraced the current soundscape.

The Irish pop group explore a more modern sound on these 12 songs. And tracks like the synth-driven ‘Talk About Love’ and the Calum Scott co-penned ‘The Joke Is on Me’ would be right at home on mainstream radio playlists. Some of the album’s most enjoyable tunes come courtesy of some of Britain’s favourite songwriters - the sunny ‘Because’, co-written by Ed Sheeran, and the Gary Barlow penned ballad ‘Love’ (a cover of Take That’s ‘If It’s Not Love’) will please the group’s long-time fans.

Frontman Keating gets the lion’s share of vocals on the set, with Graham getting the occasional lead, and the guys also poignantly show that they haven’t forgotten their fallen comrade. In what is the most touching moment of the record, the group rework a Stephen Gately B-side, ‘I Can Dream’, retaining some of his vocals. It is only fitting that the late singer’s is the final voice we hear on the album.

Aside from an odd collaboration with Alesha Dixon (‘Tongue Tied’) which leaves one wishing the group had chosen to work with someone more relevant instead, Thank You & Goodnight is a pleasant final record and makes for a satisfying farewell.

Of goodbyes, reunions, and disappointments