An intellectual who stood her ground 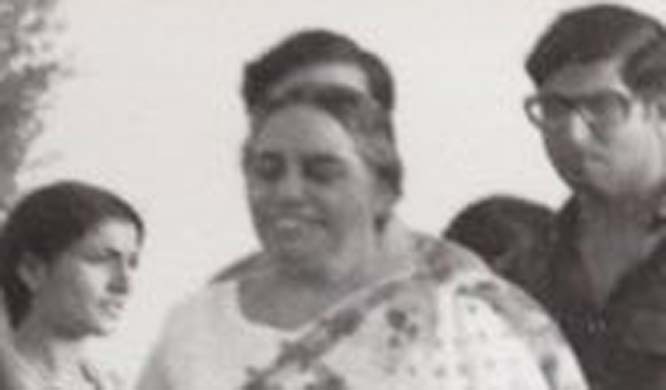 A Fulbright scholar of 1950s, Principal Government College for Women Quetta, Faisalabad and Rawalpindi, founder of Postgraduate Department of Geography at Asghar Mall College Rawalpindi and first woman Vice Chancellor of Pakistan (VC Quaid-e-Azam University 1972-76), 95-year-old Dr Kaniz Yusuf (1923-2018) quietly died last week in Islamabad. She had promoted many students and many of them are on key posts.

As a student, she was among 22 girls, including Nisar Aziz, Dr Maryum Elahi, Imtiaz and Razia Yusuf, who had worked in refugee camps in 1947 in Lahore. As an academic and researcher, she had not only set up National Institute of Pakistan Studies (NIPS) but was also a part of the core team along with Faiz Ahmad Faiz (as quoted by Nusrat Javed) that had fixed date of birth of poet philosopher Allama Iqbal (9th November) in 1976.

In her first tenure, late Benazir Bhutto had appointed her head of National Institute of Historical and Cultural Research. That institute (NIHCR) was a brainchild of Zulfikar Ali Bhutto and famous historian K K Aziz was its first head. But during General Zia’s dark times, the institute was ruined deliberately. As its head, Kaniz Yusuf had published a forgotten work of Syed Zaidi Alhuma, Quaid-e-Azam aur un kay Rufaqa, based on 13 rare interviews of personalities who had met the Quaid. But the establishment of Zia was against such material.

This small book is among primary sources to understand not only Pakistan movement but also Pakistan’s drift towards religious extremism during Liaquat Ali Khan’s period, especially after the death of Jinnah. With her close friends like Ashfaq Saleem Mirza she had planned to write history of Pakistan in 10 volumes and did some work but after dismissal of the Benazir government it was never published.

Dr Yusuf was born in 1923 in Lahore near Qila Luchhman Singh (Kasurpura) behind Minar-e-Pakistan. Her grandfather Sufi Peer Bakhsh was a linguist and her father was a headmaster in Patti near Kasur (now in Firozpur, India). Till 1947 both Kasur and Patti were included in district Lahore. Firozpur was included among those half a dozen Punjab districts where Muslims were in majority (above 44 per cent) and till August 14, 1947 they were adamant on being included in Pakistan but twisted Boundary Commission not only included them in India but also cut Patti from district Lahore.

Kaniz’s father could not think of such barbaric act and lost his memory. I interviewed Kaniz in 2006 for a left journal and she said "my father lived for 10 years with us after 1947 but he had no current memory. He remembered the holy Quran and events before 1947. He could not even recognise his son." The story of those single largest districts is almost missing in our stories about partition.

She did her matriculation in 1941 and had joined newly-formed Islamia College Cooper Road, Lahore where Principal was a talented Christian woman Thakur Das. Bano Qudsia was her college fellow. Begum Altaf Gauhar was among her teachers. Her ideals were outspoken and liberal Begum Jahan Ara Shahnawaz and resilient Salma Tassaduq Husain. She did masters in geography from the Punjab University.

She joined Government College for Women Multan as a lecturer in 1948 and spent five years there. In those years, she also wrote a research paper on cottage industry of Multan. From 1953 to 1956, she taught geography in Lahore College for Women. "Till mid-1940s, Punjabi Muslim families had started sending their girls to colleges and many of us did not wear burqa."

In 1956, she got Fulbright scholarship and went to Clark University Worcester, Massachusetts (USA) for Ph.D. She liked the American lifestyle that was quite opposite to the colonial life. When she came back in 1959, first martial law had been imposed. She praised the Sharif Commission’s report but remained critical of formation of textbook and examination boards through which State had bureaucratised and centralised education. "After creation of Pakistan, in first 10 years we did not plan things well and remained dependent on colonial legacy but in Ayub’s times when we started thinking, we started drifting towards religious extremism."

Equally critical of secular, progressive and religious groups, Kaniz admired Zulfikar Ali Bhutto and his independent thinking. "America was against Bhutto from day one when Bhutto was foreign minister of Ayub." When Bhutto had resigned from Ayub’s cabinet, she was among many young intellectuals who joined him. At that time, she was principal of Women’s College at Pindi.

It was Bhutto who had appointed a woman as Vice Chancellor of a University in Pakistan for the first time -- that was Kaniz Yusuf from 1972 to 1976. She tried her best to lay foundation of a modern higher education institute in the newly-formed Quaid-e-Azam University. National Institute of Population Studies (NIPS) is one fine example to understand true spirit of Pakistan Movement but thanks to twisted Islamisation of Zia, Pakistan drifted towards religious extremism. "Religious lobby has changed Iqbal and Jinnah as per their extremist interpretations."

She remained critical of the US dictation in power politics in Pakistan right from Gen. Ayub till Musharraf, but she was equally against infiltration of religious extremists in our State.

"I took retirement from education department in April 1979, (the month Gen. Zia hanged Bhutto with the help of courts) and went to London. In my absence a case was launched by the dictator against me regarding Al Zulfikar." Like Pindi Conspiracy case, it was a usual trick to fix enemies in false conspiracy cases. Our State has inherited that legacy from colonial masters and still it is largely in practice. Even few comrades accused her of betrayal but she was not demoralised and worked for Democratic Pakistan, an anti-Zia magazine run by immigrants..

Also read: A life worth celebrating

After six years’ exile, she came back to Pakistan. "Khwaja Khairuddin played a vital role in my return," she had said in the interview. She remained active on intellectual front and never accepted the US interventions nor compromised with religious extremist narrative of our establishment.

Kaniz was a religious person by nature and a staunch supporter of Iqbal, Jinnah and Pakistan Movement. She was against Jehadi interpretations based on Ideology of Pakistan. She was among the last enlightened generation who knew how and why Pakistan was created and how it gradually drifted from the vision of Iqbal and Jinnah. Our present is outcome of those bad policies, promoted by successive rulers, especially dictators.

Another article on Kaniz Yusuf appears in Encore section today

An intellectual who stood her ground