How to reverse decline in exports 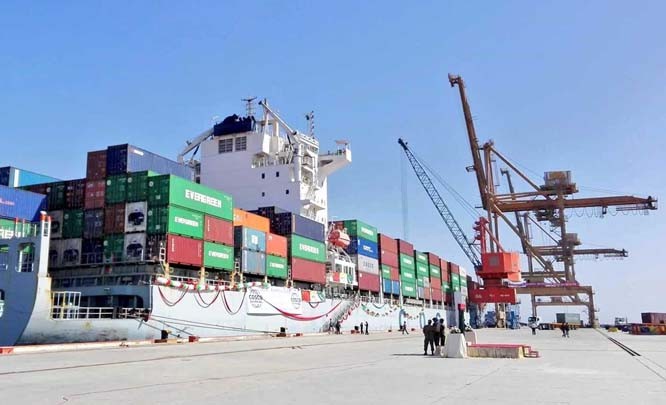 Pakistan is in the midst of an undeclared economic crisis. The foreign exchange reserves are being boosted to avert an immediate crisis. Amongst other factors, a negative trade balance is also an important factor. In simple words, it means Pakistan is importing more from the outside world than it is exporting. It has been so for a long time. However, now it is at the level that it is contributing to economic sustainability crisis.

A cursory look at the Economic Survey of Pakistan 2017-18 informs us that the services sector is the largest contributor to the GDP (60.23 per cent), with industry (20.91 per cent) and agriculture (18.86 per cent) ranking way below it. If you further breakdown the contribution of industry, manufacturing only consists of 13.56 per cent out of the overall industrial output of 20.91 per cent. These figures illustrate the dismal manufacturing productivity in the country.

Declining exports reflect worsening of the current account balance. As per the Economic Survey, Pakistan’s exports were USD 25,078 million in 2013-14. They decreased to USD 14,234 million for 2016-17 July-February period and then slightly increased to USD 15, 970 million, according to the provisional figures for the corresponding 2017-18 July-February months.

There is a need to assess the reasons behind the perpetual decline in Pakistan’s exports. According to the State Bank of Pakistan (SBP) Annual Report 2014-15, growth in Pakistan’s exports has been "patchy" and "volatile" since the 1970s largely due to inconsistent trade policies. Pakistan’s exports are very much "resource-based" and availability of cotton and rice to a large extent determine the volume of country’s exports.

The above-mentioned facts reflect on the declining level of exports in Pakistan. However, there is also another interesting perspective in the literature. Rathin Roy, a prominent political economist in India states in his article ("Piketty and the Middle Income Trap", Business Standard, August 2018) that countries like Japan went through their "development transformation" by increasing their exports to the advanced countries. Income earned from growth of exports led to an increase in the domestic demand and completed the transformation of such countries.

The literature on exports discusses many factors behind the poor exports performance of Pakistan. It is stated that Pakistan has not moved beyond its import substitution economic model of 1950s and 1960s and has an "anti-exports bias."

The case is different for India now, according to Roy: "…the age of export-led growth is at an end. Changes in technology and patterns of production mean that for countries such as India, increases in output and income can only be complemented by external demand (exports); they cannot be the main driver. While exports are important to improve productivity, India’s development transformation will depend largely on increased domestic demand for goods and services." One need not necessarily agree with Roy. However, looking from this perspective, one questions whether nearly 87 per cent of Pakistan’s value addition being consumed by the domestic market is too alarming?

Majority of value addition in the country being absorbed by the domestic market is an issue for Pakistan due to the increasing current account and trade imbalances. Given the imbalances, there is need to look into the reasons behind declining exports in Pakistan and the way to overcome the challenges.

The literature on exports discusses many factors behind the poor exports performance of Pakistan. It is stated that Pakistan has not moved beyond its import substitution economic model of 1950s and 1960s and has an "anti-exports bias." Similarly, Pakistan has lacked a well-coordinated exports promotion policy unlike the East Asian economies. It did not graduate from low value-added exports to higher value addition. Pakistan was also not able to coordinate the provision of easy credit, skilled human resource, technological advancement and a more supporting tariff structure for its exports.

Another view in the literature is that a few large manufacturers dominate the export market of Pakistan and its base is not diversified. The small and medium enterprise (SME) sector lacks the capacity building, financial and technological upgradation to contribute effectively to the exports market.

Pakistani exporters have also not fully caught up with the quality certification regime that is the linchpin of modern global trade. Poor physical infrastructure, lack of adequate availability of electricity and gas, high cost of doing business and lack of innovation are cited as other important factors behind this decline. On the World Bank’s Ease of Doing Business Index, Pakistan stands at 147th position out of 190 countries in 2018, only ahead of Myanmar and Bangladesh in South Asia.

There is lots of discussion in the literature on the measures needed to reverse this decline in exports and it is difficult to comprehensively illustrate them in this limited space. The key recommendation is to have a robust industrial policy with exports promotion as the key objective. Other institutional and organisational drivers should help achieve results for the national exports policy.

Fixing the regulatory framework is important. Making sure the Pakistan’s youth bulge is transformed into skilled labour force is another policy intervention that is needed by revitalising both the education and vocational training sectors and strengthening the outreach and effectiveness of institutes like the Technical Education and Vocational Training Authority (TEVTA). All the other gaps mentioned above ranging from physical infrastructure, technological advancement, availability of cheap credit, inculcation of a culture of innovation and product diversification, catching up with the certification regime are much needed.

The biggest challenge is how to graduate from low value added textiles products, move from informalisation to formalisation of key manufacturing output, upgrade the SME sector and more so tap into the information technology and communications sector to be more compatible with the growing global market trends.

How to reverse decline in exports