Let us send girls to school 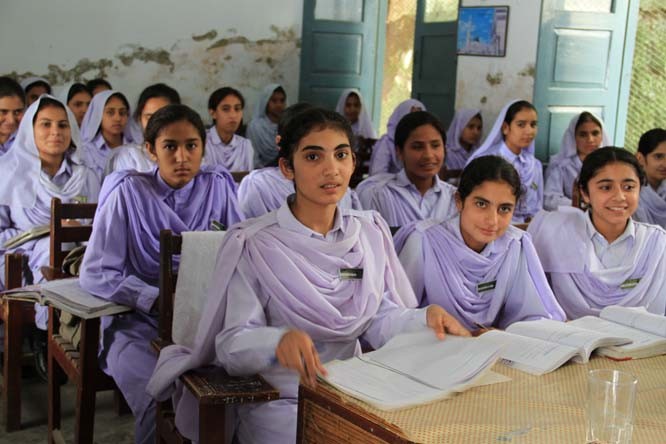 Only recently, Pakistan was rocked by at least two terror attacks. While sadly, the country is still vulnerable to incidences of terror, what comes as a relief and hope is when they are foiled successfully by security forces. And what came as a double surprise was when in one of the incidents of successfully thwarting a terror plot, the lead was taken by a female police officer. Not only was this an emerging case of breaking patriarchal values, it was also a living example of how education can shape the future of a woman in Pakistan.

There was a time when Suhai Talpur -- the female SP who led the operation to foil an attack on a Chinese consulate in Karachi -- had to almost give up on any hope of getting educated. Belonging to a lower middle-class family of Bhai Khan Talpur village in Tando Muhammad Khan district, Sindh, she was expected to receive religious education, at the most. Attending a school was out of the question.

But Suhai’s father, a writer and activist, had bigger dreams. He moved to another village, cut off ties with his relatives, only to get his daughter educated. His dream came true, when Suhai cleared the competitive examinations for civil service in her first attempt and joined the police force. The rest is, as they say, history.

What are the reasons for lower enrolment of girls? Unfortunately, despite entering the 21st century, Pakistan has still not been able to break away from the shackles of poverty, misogyny and patriarchal tradition.

Human Rights Watch organisation reports that "Lack of access to education for girls is part of a broader landscape of gender inequality in Pakistan". The country has one of Asia’s highest rates of maternal mortality. Violence against women and girls -- including rape, ‘honour’ killings and violence, acid attacks, domestic violence, forced marriage and child marriage -- is a serious problem. Twenty one per cent of females still marry as children in Pakistan.

And if there is willingness to educate a girl, government schools are in such short supply that even in major cities, many children cannot reach a school on foot safely or in a reasonable amount of time. The situation is far worse in rural areas. Secondary schools are in shorter supply than primary schools, and colleges are even more scarce, especially for girls. In a highly gender segregated society, acceptance of boys and girls studying together diminishes in more traditional and mostly rural setups. Many girls are pushed out of continuing studies because they finish at one school and cannot access the next grade level.

If there is willingness to educate a girl, government schools are in such short supply that even in major cities, many children cannot reach a school on foot safely or in a reasonable amount of time. The situation is far worse in rural areas. Secondary schools are in shorter supply than primary schools, and colleges are even more scarce.

But for many parents, the most fundamental barrier to sending their children to school is poverty. Even relatively low associated costs can put education out of reach for poor families, and there are many poor families in Pakistan. In 2016, the government determined that about 60 million Pakistanis were living in poverty, about 29.5 per cent of the country’s population. With many mouths to feed, poor families, if educating their children, opt for the boys.

Many children, including girls, are out of school because they are working. Sometimes they are engaged in paid work, which for girls often consists of home-based industries, such as sewing, embroidery, beading, or assembling items. Other children -- almost always girls -- are kept home to do housework in the family home or are employed as domestic workers.

Social stigmas are plenty. Girls are seen as a burden since birth. Spending on their education is still considered futile, when compared to the ‘cost’ of their upbringing, nutrition and clothing, all to be able to spend more to marry them off with a dowry which may be a crushing blow to their parents’ economy. Men are the providers, the bread earners. Women are only supporters, hence the early they assume their role, the better.

Empowered girls are seen as a threat to the false ego of boys, as well a danger for demanding their rights in property and inheritance. Under false pretences of a family’s image and social status, they are kept behind walls and layers of fabrics, to choke them into isolation.

Educating girls in Pakistan is an issue not restricted to class or a segment of the society. Well educated and well off families may also prefer limited education for their females, just ‘enough’ for them to make a good impression for gaining a decent proposal. Career oriented studies are still deemed unnecessary, since females may not be expected to work after they get married.

Some men fear, that if their women step out of their houses to earn a livelihood, they would refuse to succumb to a submissive persona and tend to centuries old tradition of nurturing and caring. Yet, there are some men who do not hesitate to let their women toil to earn to pay for their drunken stupors, ensured by a barbaric display of violence.

Violence is used in not one, but multiple ways to keep girls away from schools. Malala Yousufzai -- now an internationally renowned activist for female education -- is a living example. She dared to tell the truth about the elements trying to restrict young females like her at home. She was responded to by a bullet in her head.

Malala managed to escape death, and a moratorium on her education. But the elements prevail. Many girls’ schools were attacked and bombed in the northern areas this year, sending out a strong message to families to keep their girls at homes.

Where the state may still be failing to endeavour to educate more women, national and international non-governmental organisations are taking a lead in the effort. UNESCO and the World Bank are running various projects in the country. Pakistan Alliance for Girls Education (PAGE) is another prominent NGO striving for the purpose.

If there was no education for girls we would not have Mohtarma Fatima Jinnah -- not just a sister to the founder of Pakistan, but herself a fierce campaigner for independence and later, women’s rights. Without literacy, Pakistan would have not had the privilege of having the first female prime minister in a Muslim nation -- Benazir Bhutto. Without education there would have been no Ismat Chughtai, Kishwar Naheed, Fehmida Riaz, Parveen Shakir, Haseena Moin, Bapsi Sidhwa, to name a few of the female literary icons of the country. There would have been no champion of human rights like Asma Jahangir, braver than any man of her time.

Had Suhai not attended school and had her parents opted to keep their blood ties close, a different chapter would have been written in history. Suhai Talpur may have been married off to some close or distant relative at a tender age. She may have been spending her life quietly, attending to chores and family. The desire in her heart to read and write may have already been burnt out, and she definitely would not have made to headlines as she has done today.

It’s time that we educate girls, not only few privileged ones but all. It’s time we let the likes of Malala live in her own country and prosper. It’s time we have some gender equality. We could begin by sending our girls to school.

Let us send girls to school