In foreigners we trust

Perhaps, it’s time for a deeper exploration of the country’s culture by the visiting bloggers to Pakistan 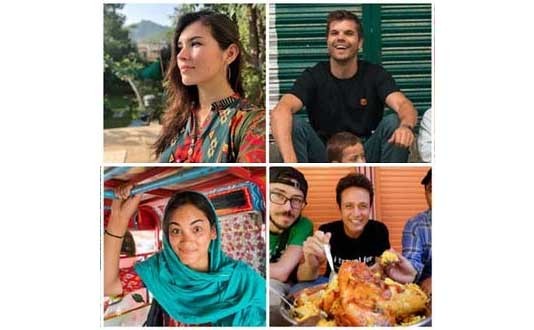 When George Fulton’s nationally televised ‘George ka Pakistan’ became a breakout hit on Geo in 2005, the country experienced its first taste of validation from a westerner, and seemingly couldn’t get enough of it. George was everywhere: in shows, in ads, even receiving a Pakistani citizenship from then Prime Minister Shaukat Aziz.

But this very act of ownership gave way to inevitable critical assessments of his adopted land, leading to his fall from grace. Criticism was to deviate from the script that a foreigner was expected to follow in a country thirsting to get away from its depiction as a playground for rogue terrorists running amok in a dusty, barren land. Goras are venerated so long as they stick to the script, and continue to be cheerleaders of a ‘misunderstood’ country that has been unfairly represented in the international media.

In that regard Eva Zu Beck seems to be the second coming of George: a British citizen who visited Pakistan and immediately fell in love with it. She cannot get enough of Pakistan and Pakistan can’t get enough of her. Just having started out with around 1000 followers before she came to the country, Eva has now reached 133,000 subscribers on YouTube and 164,000 followers on Instagram. Of course, her ride hasn’t been quite as smooth as George’s; in fact part of her viral fame is the harsh criticism she received for dancing with the Pakistani flag inside a PIA plane. But Eva stuck to the script, continuing to say good things about the country, and making her vlogs under even greater visibility and support from some of the most ‘established’ circles in Pakistan.

Eva’s travel vlogs, Cynthia D. Ritchie’s perfectly orchestrated viral picture riding a bicycle in Peshawar, the prominent international vlogger Mark Wiens’ food excursions to Lahore, Gujranwala and Islamabad, a recent collaboration among eight vloggers from five countries showcasing the beauty of Pakistan’s north, all seem to have suddenly put Pakistan on the tourist map by beaming out videos that capture its high jagged mountains, grand roads, great food and hospitable people, jiving well with the PTI government’s stated emphasis on tourism in Pakistan, but are these foreign voices being privileged over more authentic, local ones simply for being white and more pliant to a state-sponsored narrative of beauty and perfection?

Aneeqa Ali, who runs a travel startup by the name of ‘The Madhatters’ says "getting a foreigner’s validation can add credibility to the idea of Pakistan being a safe country for foreigners, but it’s important that those who are chosen as the advocates of the country have enough knowledge and experience of travelling within the country. I think Alex from ‘Lost with Purpose’ could be a good option. She has travelled to Pakistan four times, and has more information about Pakistan than an average Pakistani, but she does not get selected in any of the marketing campaigns, most probably because she looks more like an Asian than an American."

While some of these bloggers came to Pakistan and gained their fame here, the most effective ones in terms of real outreach are those who already had a strong following before coming here. Mark Wiens’ vlogs from Pakistan are a real coup in this regard.

Although even locals so far have only stuck to the tried and trusted route of aesthetic framing and gushing praise, perhaps it is time for a deeper exploration of the country’s culture.

Amongst travel bloggers, he has one of the highest number of subscribers on YouTube and his positive projection of Pakistani food has not only reached followers in the larger world, but more interestingly opened up Pakistan to its archenemy India, whose populace has remained shielded from Pakistani entertainment through its government’s decree. Mooroo, Irfan Junejo and UKhano have also proved instrumental in this regard.

Eva Zu Beck was recently picked up for a collaboration with one of Pakistan’s leading English dailies. Another source in the travel industry who does not want to be named says, "It would have been better if they had also chosen a local vlogger alongside. Many local travel vloggers also have hits in the millions and privileging someone from abroad over them seems a little unfair".

Although even locals so far have only stuck to the tried and trusted route of aesthetic framing and gushing praise, perhaps it is time for a deeper exploration of the country’s culture. Where are the videos that train a critical eye on our tourist facilities, one that can perhaps only be created and digested if produced by local Pakistanis? Travel videos shouldn’t be all about repeatedly showcasing the beauty of the north, something of little value to those within the country who are already familiar with it all.

They also need to go beyond mere ego-massaging of Pakistanis who have grown up with a deep inferiority complex about the way their country has always been treated on international platforms. They have to grow and mature to turn into true cultural criticism that can hold the government accountable to the things it is failing to do, such as retaining and creating real diversity in the country without which the tourist experience remains shallow and facile.

In foreigners we trust