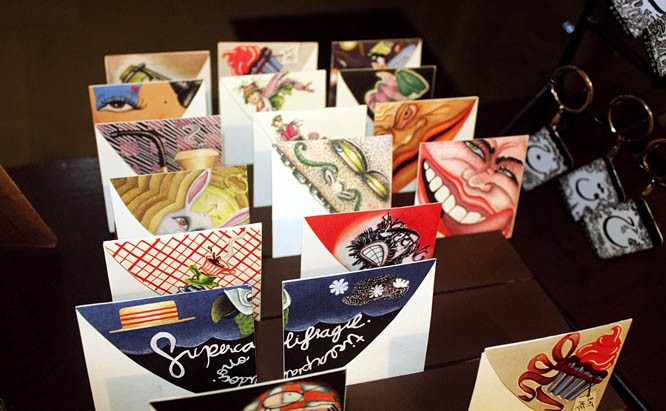 If you have been to any cultural events in the city, and come across any pop-up shops, you can’t have ignored the quirky and fun stationery items and pieces of artwork on display, by the brand name RemTem.

Visual artist Reema Siddiqi’s labour of love, RemTem was founded in 2005 as a startup at Plan9. Overtime, it grew into a vibrant enterprise, coming out with a diverse range of products -- bookmarks, storage boxes, key chains, notebooks et al; more recently, introducing the colouring books for adults also. According to her, "These are not decoration pieces; these are tools to help open up the creativity within ourselves."

Siddiqi reveals that "RemTem" is the nickname her sister gave her. The RemTem products are targeted towards teens as well as adults, and there is a conscious effort on Siddiqi’s part to make the items gender-neutral.

The products can either be bought online or at different pop-up shops at events around the city, as Siddiqi still does not have a permanent outlet to display them.

As somebody who rejected the "conventional path of education" chosen for the girl child back in the day, she opted to study arts. Though she missed the chance to get into the National College of Arts, which she says was a dream for her, and took up fashion design at a private institute, she returned to NCA years later for a six-month diploma in animation.

Looking back, she admits that her ‘diverse’ educational background eventually worked in her favour, as she was able to channel much of her creative energy into the kind of art work she always saw herself doing. She had even had a small stint at a clothing company prior.

Siddiqi began by sketching abstract designs on paper, not quite sure what to do with them. Her degree in textile design came in handy. Alongside, she took some crash courses in drawing also.

She recalls how it was after an American tourist asked her if he could colour in one of her handmade patterns that she thought of creating colouring books for adults. She claims to be the first in Pakistan to have come out with such a product.

She also hopes that the designs will act as a form of therapy, as coloring is known to have the potential to help reduce anxiety.

Siddiqi’s work is composed of abstract art, calligraphy, and pointillism -- a technique which she initially learnt after being inspired by a diagram of diffusion in her 7th-grade science textbook.

Her calligraphy is basically confined to her range of huroof (Urdu alphabets) products drawn on metal key chains and notebook covers. She sells the designs, because she wants to promote Urdu language and believes that people need to correct their ‘huroof-e-tahajji’.

So far, the feedback from her customers has been very positive. For her part, Siddiqi makes sure that only the best quality materials are used in RemTem products. She is involved in the process, right from conception through the perforation to going all the way to Data Darbar to find a printing press recommended to her by a friend.

Quite like the American origami artist Lisa Frank, known internationally for her colourful school supplies for children, much of Siddiqi’s own fun personality is reflected in her products.

She also offers drawing classes in her studio that she has set up in Lahore, and hopes that she can encourage more people to start drawing.

Reema Siddiqi would also like to change the popular way of looking at a piece of art in Pakistan. She laments the fact that galleries would not accept her work because it’s not typically what they are used to putting on display. "They [galleries] didn’t accept my work because they didn’t understand my work," she says. "They even refused to have a look at my products because I am not an established artist."

Initially, even the visitors at her studio didn’t seem to understand her work. But over time, "perceptions are changing. There’s a lot more acceptability to diversity now."

She says she was inspired to do this when a colouring book filled with cuss words came under her radar. Wanting to combat that, and to direct attention away from the abuses, she came out with her own version. "Oh yaar" consists of Urdu slangs, something that attracts her younger audience who find these amusing.

Reema’s studio can be described as a haven for artists and creative souls. The work space is covered in paintings, fairy lights, origami and creative books on art. In the corner of the room, lies a loom. Next to it, a scarf hangs on a coat hanger which she designed herself. The scarf too was made and designed by her on the loom. Given her background in textile design, Reema was able to diversify to a subcategory of her brand, called RemTem Alternations. Under this, she says she "can confidently fix clothes that the tailors ruin."

The concept behind both of her brands is that she offers creative solutions whether it is in the form of mending damaged or ill-fitted clothes or making handmade decorations for her customers.