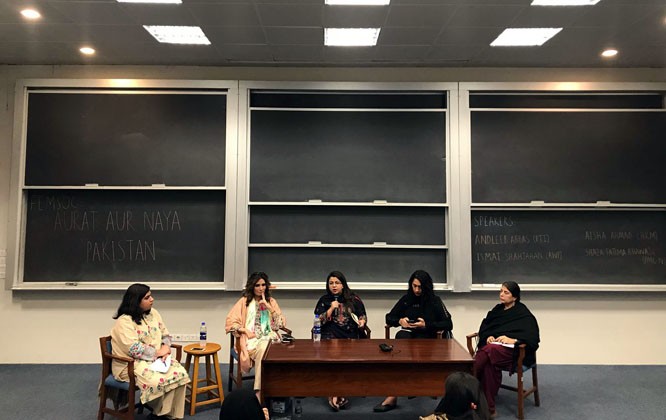 On November 15, I sat waiting in an undercrowded auditorium for my first LUMS FemSoc event to begin. It was, in true Lahori fashion, running behind schedule.

Centred around the position of women in the supposedly born-again ‘Naya’ Pakistan, the discussion seemed interesting from the outside, not only because of the panelist lineup but also as the two major political parties had had precious little claim to ‘feminist politics,’ unlike the AWP and HKM.

Opening the discussion, Bucha asked the panelists about their respective organisations’ stance on feminist politics. While answering, there was a tendency (among some panelists) to deviate from the question. It didn’t come as a surprise to many that representatives of political parties and organisations that had associated themselves with feminist politics spoke about it, and those that hadn’t, spoke instead about the performance of women within their parties. The responses of Abbas and Khawaja, for instance, indicated not only the dilution of ‘feminist’ to mean ‘anything to do with women,’ but also their parties’ lack of any consciously feminist aspirations.

Abbas’s answer made no reference to her party’s conscious feminist outlook, relying instead on isolated instances of women such as Dr Yasmin Rashid rising to prominence within the PTI to boast that individuals’ progress in the party was "performance-based" rather than "gender-based."

Khawaja’s response was more relevant, as she broached the issue of representation (she claimed women’s representation within PML-N was 19 percent), and gave details of the legislation related to women’s representation and rights supported during PML-N’s tenure, such as the creation of a 33 percent quota for women on boards of public sector organisations. Nonetheless, as Bucha later pointed out, "formulating such laws is not necessarily a feminist act, given that this is often done to enhance the party’s image at home and abroad."

Ahmad and Shahjahan, on the other hand, explicated the feminist politics of their respective organisations which, while having significant similarities, had some differences as well.

Introducing the HKM, Ahmad said that the party was formed in Lahore before the 2018 general election, when a group of individuals decided to use the attention accorded to otherwise ‘’forgotten constituents’’ such as workers and women in election season to provide a real platform for them to get their concerns heard. The HKM members visited Lahore’s working-class neighbourhoods to learn about the residents’ concerns in order to mobilise them and facilitate communication between local council members and constituents, helping the latter with basic needs such as installing water filtration systems. In July, they ran a "Paani Dou, Vote Lou" campaign.

Ahmad also spoke of the HKM’s work with Trans activists.

Shahjahan’s description of AWP’s feminist politics was, perhaps, the most robust. She spoke of the intersection of class, religion, and gender in shaping Pakistani women’s experiences, and explained her party’s intersectional approach. "Just a feminist struggle is not an option," she stated.

Part of the AWP’s feminist politics, Shahjahan claimed, is the refusal to create separate women wings which only marginalise them.

She further stated that whereas the AWP members also identified themselves as socialist-feminists, their politics differed from that of HKM in that they "also address the national question" and were on the frontlines during the Pashtun Tahafuz Movement (PTM) protests.

"Its politics is also revolutionary in its aims of overturning the current gender structure and its hold over women’s minds and bodies," she added.

Like Ahmad, Shahjahan rejected the neo-liberal order, citing the adverse effects the cuts in public spending to repay debts had on women’s welfare: "Give women chickens and sewing machines… but don’t touch the patriarchy!" The sarcasm in her statement was obvious.

There were two points in the discussion in particular when the represented organisations’ different positions on the political spectrum caused some underlying tensions to bubble to the surface. The first occurred when, after Shahjahan had underscored her party’s struggle for a secular Pakistan, Khawaja explained that although there were some people from the Left in the party, PML-N was not secular but "right of centre." She expressed the belief that "religion is our reality," and that it was not religion itself but its use as a political tool that was the problem, which she had the grace to concede was a "debate in itself."

Khawaja pointed to the difference of opinion as "the beauty of democracy," and urged the students to "read up on multiple perspectives, have an informed opinion, and vote consciously" rather than become prey to "political victimisation" and "propaganda."

Replying to the moderator’s query about the poorly implemented legislation, Shahjahan said that the wider culture had to change so that women could avail their rights and take male relatives to court without aggravating their families.

Khawaja made a similar point about the need for cultural and structural changes, quoting the inclusion of chapters on violence against women in school textbooks by PML-N’s government as an example of such measures.

Abbas similarly claimed that although laws exist, mindsets have to change. But unlike Khawaja, she didn’t try to give examples of attempts by PTI to create this change. In fact, implementation issues of existing legislation protecting women were hardly addressed by any of the panelists. Khawaja merely stated that implementation falls outside the ambit of parliamentarians, while Abbas remarked that there was a lack of political will to implement laws, institutions were weak, and the PTI government had come into power relatively recently, and so it would take some time for measures to take effect.

Her answer ambiguously left the question if there was a lack of political will within her own party unaddressed.

I walked out of the auditorium knowing as much about the status of women in "Naya Pakistan" as I did when I had entered the place two hours ago, contrary to what the event’s poster had promised me: ‘’Will women be safe in Imran Khan’s Naya Pakistan? Come and find out!’’