As recent reports give out a bleak picture of the country’s water situation, very little is known about the follies committed and repeated in making Pakistan’s economy the most water intensive economies in the world 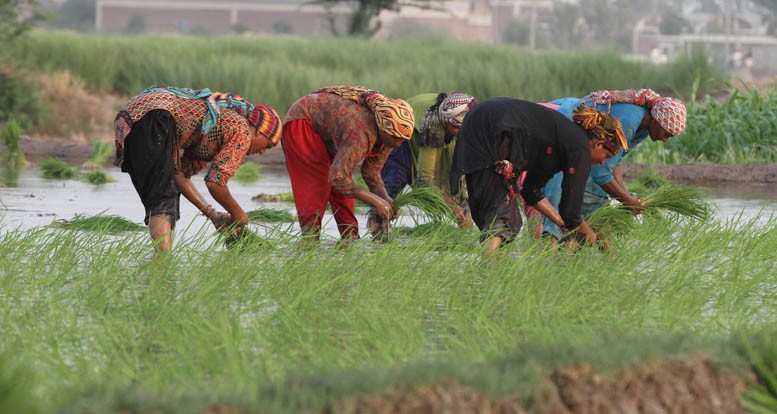 Pakistan is fast approaching the scarcity threshold for water. With weather patterns becoming increasingly erratic, an unchecked population explosion, and trans-boundary tensions over natural resources; the country is in a precarious state when it comes to water management. Going through a phase of peak water (a concept that underlines the growing constraints on the availability, quality and use of freshwater resources), the fast depleting water resources are testing limits of its availability.

Having the world’s fourth-highest rate of water use according to the International Monetary Fund (IMF) reports, Pakistan’s per capita water availability per annum stands at 1,017 cubic meters -- worryingly close to the scarcity threshold of 1000 cubic meters. Further reports from the United Nations Development Programme (UNDP) suggest that if the country fails to mend its ways, in terms of its water usage, it stands a risk of reaching absolute water scarcity by 2025.

Whereas, all recent reports give out a bleak picture of the country’s harrowing journey to the brink of a water catastrophe, very little is known about the follies committed and repeated in making Pakistan’s economy the most water intensive economies in the world.

Back in the time of the Mughal empire all agriculture lands were subjected to a land tax according to its produce. During Jalaluddin Akbar’s reign a land tax was levied in the form of a Produce Index Unit (PIU) under which all agricultural lands were inspected every 25 years on the basis of produce and water usage and the tax was readjusted accordingly. Akbar’s PIU was thought to be the foundation stone for a progressive water economy in the subcontinent.

In the midst of the 19th century, the Indian Subcontinent witnessed the advent of the British Raj, who upon realising the subcontinent’s dependency on agriculture embarked on making canals to expand the agricultural base in order to rake in more revenue through land taxes. All throughout the British Raj, water was considered a free commodity but huge sums of revenues were collected through taxes on agriculture.

Fast forward to present day Pakistan, agriculture still remains the largest sub-sector of water use, consuming around 95 per cent of total water resources available -- both surface and groundwater. As much as a third of all food production is grown with water from non-renewable and rapidly depleting groundwater. Currently, according to the UN Food and Agriculture Organisation (FAO), an astonishing 60 per cent of the water diverted or pumped for irrigation is wasted -- via runoff into waterways or evapotranspiration.

"We should have built upon the strengths identified in the water economy models, where revenues generated from the use of water were invested back into the system for maintenance of the irrigation system," opines Zafar Mahmood, ex-chairman WAPDA. According to him the country is not focused towards investing in a water economy model. "We first stopped recovering the capital cost used for building new irrigation canals and then we stopped recovering the maintenance cost required to look after the canals. Until we opt to have water pricing in our water economy we are headed towards a dry future."

Currently, according to the UN Food and Agriculture Organisation (FAO), an astonishing 60 per cent of the water diverted or pumped for irrigation is wasted -- via runoff into waterways or evapotranspiration.

If we take a dispassionate look at our dismal consumptive use of water in agriculture our efficiency level stands at around 40 per cent. Out of 152 MAF (Million Acre Feet) of annual flow in the rivers, a total of 101 MAF is diverted to canal irrigation system for agricultural purpose. A further break down of the volume of water consumed reveals that out of the 101 MAF only 56 MAF of water is used by crops. This inefficiency stems from poor management of irrigation system and ground soils, as well as from the crop’s exposure to unregulated environmental conditions. As a result, much of this water never makes it to the plant, and evaporates before ever serving its intended purpose. To cater to the need created by an inefficient system, a million tube wells across the country, working under the ground-water-free-for-all policy, pumps out a further 40 to 55 MAF of water per annum to meet the agricultural demands.

Additionally, there is minimal resource recycling initiative being implemented to recapture that water waste -- meaning that despite the incredibly high usage of water within the sector, only a small percentage is effectively being moved through our conventional irrigation systems and is used to grow crops.

"Without charging for the services we are providing, it is not going to be possible to keep doing it for a very long time," says Muhammad Mohsin Khan Leghari, Punjab Minister for Irrigation. Leghari believes that the irrigation system in Pakistan should be able to raise its own revenue and should be financially viable for it to function efficiently just like it did until 1970 when it actively contributed to the national exchequer.

"There is a backlog of maintenance that is adding up in the absence of an efficient water economy. Right now the charges that we have are Rs85 per acre for the Kharif crop and Rs50 per acre for the Rabi crop -- which were last revisited in 2002. I am very sure that it’s about time we do something about it; if not, the whole system will collapse one day," he cautioned.

The amount of water wastage is not only limited to inefficient ways of farming but also the type of crops we prefer to grow. According to The Pakistan Economic Survey, 2017-2018 the agriculture sector posted a growth of 3.81 per cent, surpassing its projected targeted growth of 3.5 per cent and last fiscal year’s figure of 2.07 per cent. Even worrisome is the fact that water intensive crops such as rice and sugarcane, considered amongst the notable Kharif crops, outstripped their production targets in 2017-18 by posting growth of 7.45 per cent and 8.65 per cent respectively.

According to Professor Iqrar A. Khan, Director CAS-AFS, University of Agriculture, Faisalabad, the political economy of the agricultural sector entices farmers to grow water-intensive crops by providing subsidies and support prices. "We are exporting our water in the form of water intensive crops and products," he said. One shouldn’t be surprised then when out of the total cultivated land of the country, 86 per cent produces three high water-need crops; wheat (53 per cent), sugarcane (17 per cent) and rice (16 per cent), which consume almost 60 per cent of the water available for irrigation (40 per cent by wheat and 20 per cent by sugarcane and rice).

"If we take into perspective our water productivity for wheat with India, we produce half the produce at 0.5 kg/m3 of water as compared to 1kg/m3. Similarly, Pakistan’s estimated area under wheat cultivation is almost 21.36 million acre and we use 150mm surplus water per acre which is tantamount to a total of 10.46 MAF of water wastage only for our wheat crop, enough as the combined water storage for the proposed Diamer-Bhasha (8.1MAF) and Mohmand Dams (1.2 MAF)," Professor Khan added further.

Similarly, our Basmati rice exports haven’t exceeded two billion dollars in good years, yet the government gives incentives to farmers to grow this crop. Whereas, in neighbouring India, the government through its progressive agriculture policy encourages farmers to grow less-water intensive soya bean instead of rice during the Kharif season and canola instead of wheat in the Rabi season. "These policies have led India to become one of the leading soya bean exporters whereas Pakistan imported 1.8 billion dollars of soya bean in the last financial year," says Prof Khan.

To address our water woes, there are many strategies, including greater investment in water infrastructure, new technologies for testing and treating water, improved institutions and management strategies, and better use of economic tools. All of these strategies have a role to play in moving us on a path towards a more sustainable future. The best strategy of all -- economically, politically, and environmentally -- would be to improve the efficiency with which we use our water in our agriculture sector.