A push to the past

In his latest show at Taseer Art Gallery, Lahore, Hasnat Mehmood creates a link of tension and alienation between the visual and language 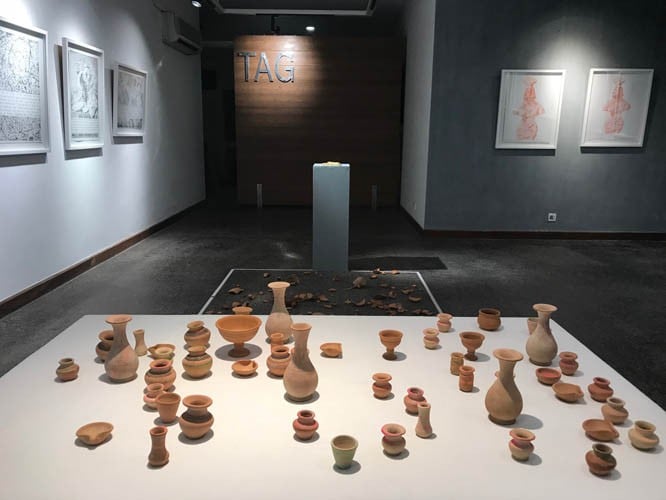 Hasnat Mehmood may have graduated with a major in Miniature from the National College of Arts but his miniature training now seems a minor memory. Still interested in the past, his visuals, subjects and outlook on art have shifted away from that of a typical modern miniaturist. Mehmood has abandoned the formula of modernising miniature but still hasn’t discarded the past in shaping his ideas and imagery.

This was observed at his solo show Look, Look Again held from Nov 6-10, 2018 at Taseer Art Gallery, Lahore. It included 15 art pieces: some of which may be not described as such as they looked like found objects; at least one was part of a performance. Obsessed with history, our modern miniature painters often trace their links to the Mughal period. Some courageous ones even go further till the Sultanate period, Persian or Turkish courts. Not many bother going beyond the arrival of Muslims in the Subcontinent. Though, A. R. Chughtai, arguably the first modern miniaturist from North India, infused references from frescos of Ajanta Caves in his paintings.

Hasnat Mehmood, too, has been concerned with a history that is not reduced to a populist version. Soon after his graduation, he created a series of works based upon portraits of Krishna: a combination of a Hindu god and an artist’s profile. Mechanically produced on plastic sheets (called ‘halftone positives’ for printing purposes, prior to the digital age), these works suggested the artist questioning the singularity of tradition and an urge to explore other means of expressions.

This course of action continued with several techniques and pictorial references, often derived from popular art. But his works from ‘Here and Now’ (2013 Lahore Art Gallery) signified the artist’s leap not only towards the stretch of time, but in examining the past -- in connection with the shift of power and question of identity. Those drawings had iconographic images of art history, from Rajput painting to Impressionism, from Indus Valley Civilization to Renaissance -- with descriptions within the frames as varied as ‘Made in China’, ‘Made in Pakistan’, ‘Made in Vietnam’ etc. These works indicate the hegemony of art history but a subversion too, due to shift in the centre of art world and a new economic world order.

In the recent show, many works unfold similar concerns, especially the reproductions of figurines and pottery plate from Harappa, Cave painting of Prehistoric period, a landscape by Vincent Van Gogh, abstract canvas of Jackson Pollack, and a Dutch still life by Jan Davidsz. de Heem (1606-1684). However, amid this group one detects a division. If statues from Indus Valley Civilization have labels such as ‘Made in Pakistan’, the rest of works from art history are layered with longer descriptions about pictures, either by critics or by makers as in the case of Van Gogh.

For art works rendered in pencil (in a strict sense not copies, since these were executed with swirling movement of pencil on paper) that belong to regions away from Mehmood’s place of origin, stripes of longer texts were inserted in the visuals. They certify how a person living far from the mainstream art and museums (Louvre,MOMA, Tate etc.), encounters these works of art with their explanations. Thus, Mehmood creates a link of tension and alienation between the visual and language.

One is aware of the presence of a source image for each work. This serves the artist’s intention: about relegating an original work in its various versions -- both in pictures and words. Often the description and commentary take over and determine the worth of an art work. Recall all those sculptures, paintings, prints and drawings that were never written about and now languish in history’s archive of oblivion. Although there are examples, where art works survived negative and hostile criticism (Pollock and Van Gogh), but our opinion is mainly formed on how these works are presented in writings. Imagine Pollock sans the essays of Clement Greenberg, or Van Gogh without his ‘Letters to Theo’. Hasnat Mehmood injects a paragraph by Greenberg for Pollock, Van Gogh’s letter for his ‘Red Vineyard at Arles’, Jo Merchant’s comment on cave painting, and Mark Doty’s text on De Heem. All this signifies the power of word over image or the vulnerability of a visual.

That vulnerability was witnessed in another form: magnifying glasses were installed on the wall of the gallery with the artists’ names cast on handles. These items placed in a row were not devices to view an intricate work of art but were pieces of art themselves, not much different from the writing on art which is initially supposed to facilitate entry into an image but at the end becomes an independent (and monstrous) entity. Likewise, paper pins, silver and gold plated, were stuck on the wall, without fixing a paper -- their actual purpose. The scale, fabrication and appearance of these pins hints at how the periphery of art has taken over the centre of art making.

In a final act of disdain, Hasnat Mehmood seems to dismantle these systems and power relations. Along with drawing the Dancing Girl from Indus Valley in pencil, and sculpting mother goddess in red glazed ceramics clay, he has made a seal of the same period in glazed and fired ceramic clay but covered it with a golden coat, alluding to the richness of the past. However, he shatters that past -- of Indian miniature painting, of European art history and Stone Age. In the exhibition, the performance amounted to the artist tapping on a piece of pottery (made by him) while offering clay pots to viewers, who taking the lead from other broken pieces, threw them on the floor within a rectangle marked by white tape.

Although the artist didn’t direct the viewers to smash clay pieces, they followed the norm. Thus, the work was severed and survived on two levels -- tradition followed blindly and an artist destroying it to make something new.

The position of Hasnat Mehmood, in dismantling the past in multiple manners, is not dissimilar to Ai Weiwei who dipped traditional Chinese porcelain into synthetic paint; or to Sudarshan Shetty, with his blue pottery, broken and joined with wooden segments. For all these artists, in the words of Mozambique author Mia Couto, "the past has not yet passed".

A push to the past