The anti-encroachment drive stems from belief that progress includes dismantling the physical representations of poverty, and creating a false image of development that is conducive only for the rich 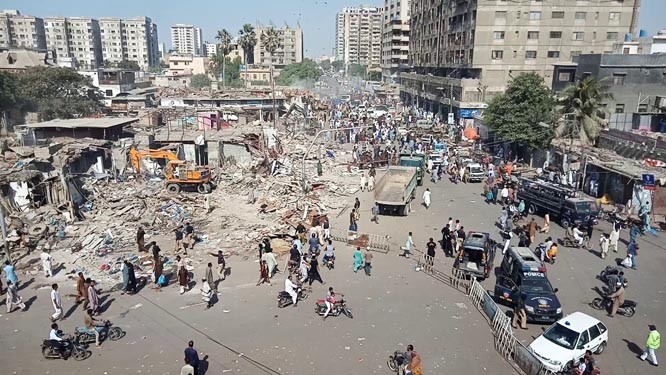 The anti-encroachment drive the government recently launched in Karachi’s Saddar once again highlights the plight of the urban poor in Pakistan’s cities. This drive is in fact a product of the state’s flawed model of development which seeks to turn our urban spaces into neat and organised urban cities with the poor pushed to the margins.

This neoliberal model of growth perpetuates an image of false order in society where the city’s urban and public spaces are open only to the rich. The poor, on the other hand, are restricted from many places in our cities simply because they are considered unwelcome and as agents of disorder.

This restriction on the movement and visibility of the poor is maintained by the physical presence of the state’s organs--think of the Dolphin Police in Lahore--or the numerous physical impediments that exist in the more posh localities, such as the check posts in cantonments all over Pakistan.

At the heart of this neoliberal model of development, therefore, is the effort to remove the lower classes from the very imagery and description of these urban places. Thus, no longer will Karachi’s Saddar be characterised by the tight, close-knit places where hundreds earn their livelihoods. Instead, it will now be represented as a broad, open space that is orderly, well-managed and restricted only to the privileged few.

Frantz Fanon, one of the greatest thinkers of the twentieth century, in fact, laid out this inherent tension in urban development as far back as the 1960s. In his outstanding book, The Wretched of the Earth, Fanon highlighted how the colonial city is split into two parts. The first part is home to the coloniser; well organised, heavily patrolled and with open spaces. The other part is the squalid dwelling of the colonised; tight spaces, little physical space, and characterised by what the coloniser would call, ‘anomie’.

The present model of development, thus, seeks to transform these closed physical spaces such as Karachi’s Saddar into the more expansive and open areas that are physical manifestations of this development. This transformation, however, pushes the poor into even more tight and claustrophobic spaces, thus perpetuating the divide in Fanon’s Manichean world.

The current neoliberal definition of progress, therefore, is predicated in physically and economically marginalising the poor. This progress, moreover, cannot countenance the existence of poverty--which takes physical form in the illegal encroachments and settlements across Pakistan’s urban areas. It thus pushes these physical manifestations into the fringes of our urban areas and away from the visibility and imagery of the affluent few who take up the space this poverty vacated.

Concomitant with this rise in the real estate bubble has been the spread of private housing societies. These housing societies are limited for the rich, and have two effects on the poor. First, they restrict the poor from large open spaces in the city. Second, they encroach on public land and thus shore up the prices of land, forcing the poor into cramped, illegal settlements.

This effort to hide away the poverty that is a natural outcome of neoliberalism and capitalism is also evident in the development of flyovers in Pakistan’s cities. As critical thinkers like Ammar Ali Jan and Arif Hasan argue, these flyovers are meant to connect one affluent area to another, without having to witness and see the anxiety or the poverty of the impoverished areas that lie between these affluent parts.

Karachi’s encroachment drive, moreover, highlights another fundamental problem in Pakistan’s social fabric: the right to own land in Pakistan’s urban areas. The less privileged segments of society are forced to work or live on illegal settlements simply because they cannot afford the residential or commercial land in our urban spaces. This residential and commercial land, in turn, has been the product of intense speculation and land grabbing over the past two decades, which have sent prices soaring in cities like Lahore.

This sharp jump in the price of urban land, therefore, is directly responsible for the emergence of illegal settlements in places like Saddar, Karachi. Successive governments in Pakistan have also failed to regulate the real estate market in our cities, which has been the target of severe speculation and investment because of easy liquidity.

Concomitant with this rise in the real estate bubble has been the spread of private housing societies in our urban areas. These housing societies are limited exclusively for the rich, and have two effects on the poor. First, they restrict the poor from large open spaces in the city. Second, they encroach on public land and thus shore up the prices of residential and commercial land, forcing the poor into cramped, illegal settlements.

At the heart of this spread of private housing societies, moreover, is once again the belief that progress includes dismantling the physical representations of poverty, and creating a false image of development that is conducive only for the rich. The problem thus, comes back to the flawed neoliberal model of growth that excludes the poor.

We must therefore critically analyse any step the government takes which marginalises the poor and that is imposed on the people by using the coercive elements of the state. Pakistan has for too long been in the throes of an iniquitous model of development. It is high time we thought of an alternative.