Taha Kehar’s new novel is a feisty, modern romance, perfect for the weekend curl up 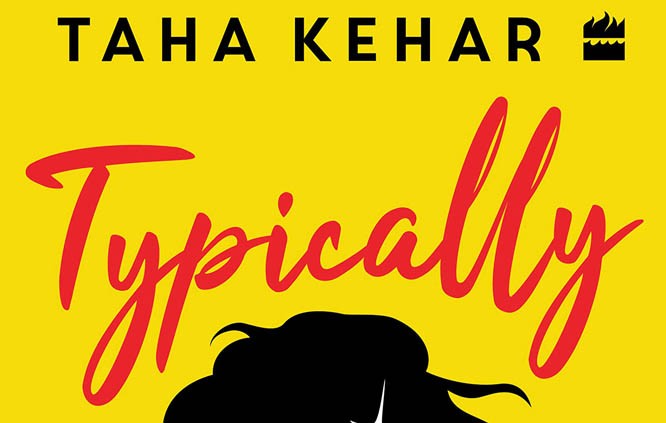 When Taha Kehar writes Typically Tanya, he borrows a page out of the Wodehousian narrative, but he does not go for the whole Wodehousian spirit. Instead, he fashions a world out of Karachi that is more Wodehouse and less Dostoevsky.

Most of us must be familiar with this quote by PG Wodehouse: "I believe there are two ways of writing novels. One is making a sort of musical comedy without music and ignoring real life altogether; the other is going deep down into life and not caring a damn…"

In Typically Tanya, Kehar does not ignore real life. Instead, his ‘upper-class’ characters ignore it. This is not a novel about Karachi’s underbelly. This is a novel about characters who belong to the privileged classes, and thus have the time and the resources to pursue love, or an affair, whatever might suit them.

At the beginning of the novel, the unlikeability of Tanya takes one by surprise -- she is rude and catty to her mother, Careem driver, her colleagues and so on. It almost seems as if Kehar initially had a man in mind when he was shaping out Tanya’s character. It is indeed so seldom for female characters to not be seeking everyone’s validation-- a blunt and straightforward bit that at first takes the reader away from Tanya. After all, why would one read about a character one doesn’t really like? It is only after a little introspection that one realises that Tanya’s character breaks the mould of cookie-cutter women churned out by the print and electronic media. Her very unlikeability becomes an endearing trait of her character. She doesn’t resort to crying when relationships do not work or when friendships are tested, instead, she either goes to a party or to bed; both being much nicer ways, in her opinion, to pass the time in hope of a better future.

One is drawn into her life, which is the hallmark of a good work of fiction -- the reader is curious to know as to what happens to her. There is a very tantalising, not-so-romantic colleague with whom Tanya is friends with but we can’t really tell if this friendship will morph into something more or not. One has to read till the very end to find out. Tanya’s best friend, however, thinks that her fiancé jilted her because of Tanya. Is that going to happen again or not is one of the questions that we as readers want to know the answers to. Grace does find the ‘graceless’ Tanya.

Interestingly though, the novel’s plot, in the process of finding grace, does not follow the typical twists and turns one would expect and stays quite organic throughout the story. There are no moments of forced reconciliations or breakups. Characters stay true to their essence. Some grow up by the end and some deteriorate. The saccharine sweetness the reader has come to expect with such stories -- women looking for romance -- is conspicuously missing from Typically Tanya and that makes for a refreshing relief. Tanya’s acidic rejoinders and her ability to get through awkward situations without batting an eyelid make for good, light reading.

It would be interesting to see if there is ever a sequel for Typically Tanya. A woman who does not try to please, or even respond to pressure, is quite a rarity in the world of fiction especially in Pakistan and one would like to see the evolving arc of this character in her later years.

While the novel is not a comedy, it has its comic moments. Tanya champions the cause of her mother’s cook in some very tight corners, especially when he is caught watching undesirable material on tv in the kitchen. The different Careem drivers who strike up conversations with Tanya, while she moves from one place to another, provide some funny insights into life in the metropolis. Karachi comes very much alive in the novel; from Koel Cafe to Mews Cafe and arts council, the novel captures a fine nuance of the city. We also find out why Tanya dislikes the roadside chai wallah (tea boy) that serves the ‘posh’ crowd.

Unlike many novels that centre around women characters, this novel is not introspective. It does not keep informing us about Tanya’s state of mind nor does it provide explanations for Tanya’s acerbic comments. Instead of internal monologues, it is the conversational structure of the novel that drives the plot forward. The first time I came across this was while reading a critical appreciation of Jane Austen where it posed that Austen’s narrative mainly moved with her dialogue. While it seems easy enough on the surface, it is a writing technique that requires finesse to be executed properly. Taha Kehar has done justice to it.

The fact that there are no ready-made explanations for Tanya’s attitude keeps the novel from becoming maudlin and cliched. Whenever the characters in the novel attempt a psychoanalysis of Tanya, it is neither life changing nor illuminating. Instead, what that psychoanalysis does is that it throws light on the characters’ own insecurities. This is a refreshing plot device and shows some real ingenuity on the writer’s part.

The reader does wonder what Tanya really thinks, how she sees life and what would happen if she really decided to look deep inside her. There is an equal chance of her finding out that she indeed is a very sorted out person or that she needs some real therapy sessions stretched over some months. For some reason, Tanya being well sorted out has a greater chance of happening. Though she is a bit rough around the edges, she can do with some more compassion and tact; she is enough in command of herself to be credible.

It would be interesting to see if there is ever a sequel for Typically Tanya. A woman who does not try to please, or even respond to pressure, is quite a rarity in the world of fiction especially in Pakistan and one would like to see the evolving arc of this character in her later years. What would help the next Tanya novel, if there is one, is a bit more of a look into the inner workings of Tanya’s mind. Well-written and entertaining, without too many macho men strutting on the pages, Typically Tanya is a good read, especially for the weekend curl up. One more thing, Tanya has a nice sense of attire. One ought to read the novel just to find out what she wore on Eid.