A theocracy or a secular State

Choose wisely, but do choose and then stay the course 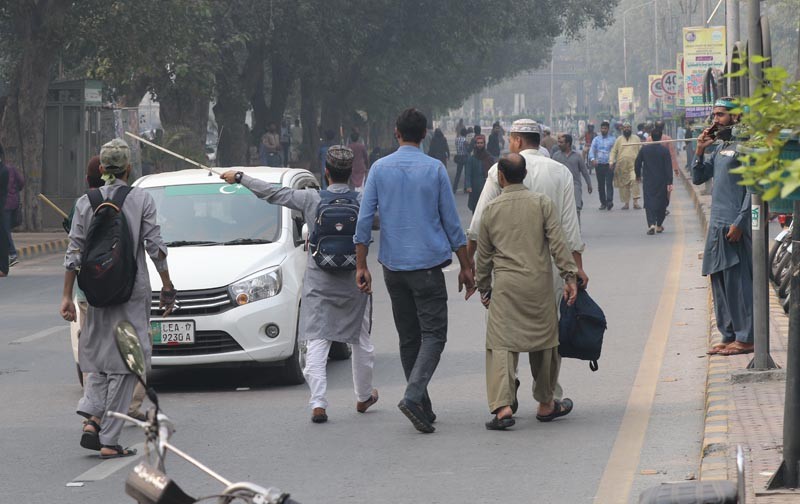 Another sit in by a religious group. Another state capitulation. Time has come to make a decisive choice. In order to ensure a viable future for itself, free from the kind of internal religio-political conflict just witnessed, the state of Pakistan should either become a theocracy such as Iran or Saudi Arabia; or, alternatively, adopt a modern secular state structure that is prevalent in much of the rest of the world.

For 70 years, the westernized liberal politico-military-bureaucratic elite ruling this country has tried to have it both ways - feeding people a heavy dose of religion while carrying on state business along largely modern western lines. In our Establishment’s view, while one part of the duality - state focus on and deference to Islam - provides the disparate masses of the country with a unifying religio-national identity and ensures a limitless supply of recruits ready to fight, the other half of this oxymoronic arrangement - western institutions of governance such as parliamentary democracy and quasi-modern judicial and administrative bureaucracies - makes possible at least a modicum of western-style individual freedoms and a relatively permissive cultural space for the upper classes.

The mayhem unleashed following the Supreme Court decision to free the blasphemy-accused Aasia Bibi has brought once again into sharp relief this self-contradictory duality that has marred the idea and existence of Pakistan from its earliest days. The lockdown of the country by stick-wielding hordes of a relatively new one-issue religious pressure group, and their open ridiculing of the three most powerful men in Pakistan - the Chief of the Army Staff, the Prime Minister, and the Chief Justice of the Supreme Court - is evidence enough that the 70-year old strategy of riding the two boats simultaneously is finally dead.

There are only two choices available to the country now: a genuine theocracy or completely secular state.

I personally would not want to live in such a society, given my own life experiences and attendant biases, yet, considering the extreme levels of religiosity now on display in the land of the pure, the option of turning Pakistan into a formal theocracy such as Iran or Saudi Arabia must be given serious consideration.

In a theocratic Pakistan, women and men would be active and equal citizens while occupying separate spheres. The new judicial system need not be "blind" like the heavily procedures-driven and unsatisfactory current British-style legal system. Islamising the economy could be tricky but if Saudi Arabia and Iran can work within the global capitalist system, so can a theocratic Pakistan. Similarly, a nuclear-armed state run by Mullahs would be a hard sell but given that both our military and our religious leadership have had collusive and symbiotic relationships with the West in the past, an arrangement acceptable to all can certainly be found.

Long ago, Islamic civilization spawned great research and scholarship. Perhaps in a truly theocratic Pakistan great learning, especially of science, would go hand in hand with religious instruction and strict observance of religion.

Such a theocracy might not be to the liking of our tiny English-speaking chattering classes who spend much time worrying about the future of this country every evening while drawing inspiration from their tumblers one sip at a time. But for the masses, who have been fed a steady diet of religion for 70 years and told ad nauseam how enforcement of Islam is the panacea to all their existential ills, such a theocratic state is the only option left.

If, on the other hand, for whatever reasons, a theocratic state is not palatable for our de jure or de facto rulers, then the only other sane choice would be to have a completely secular state - the most common form of government and state in the world today. Due to our establishment’s cynical manipulation of the masses through the use of religion, secularism has been deliberately misrepresented in Pakistan. In this country, being secular is wrongly interpreted as being against Islam specifically and against religion generally.

Contrary to this widely-held perception in Pakistan, secularism, unlike, marxism, communism, or atheism, is not against belief in or practice of religion in any way. Many highly religious people practice and advocate secularism in the public domain and believe that in this modern era of multi-cultural, religiously-diverse societies, government should be organized and run along secular lines.

That secularism is not in conflict with Islam is evident from the "pro-secularism" positions of Islamic parties of India. Maulana Arshad Madani, one of the leaders of the Jamiat-e-Ulama-e-Hind, has pleaded repeatedly for strengthening of secularism in the face of rising religious bigotry of right wing Hindu parties. Similarly, the Supreme Court of India has declared Jamat-e-Islami "an All India organisation professing political, secular and spiritual credentials with belief in the oneness of God and universal brotherhood". In fact, secularism strengthens religion by protecting religion and the religious from governmental interference.

A secular Pakistan would, at long last, be the realization of Jinnah’s promise - "You may belong to any religion or caste or creed - that has nothing to do with the business of the State" - that he made in his August 11, 1947 speech before the Constituent Assembly of Pakistan. A secular Pakistan would, in the long run, lead to a harmonious society, as explained by Jinnah in the same speech when he said: "As you know, history shows that in England conditions, some time ago, were much worse than those prevailing in India today. The Roman Catholics and the Protestants persecuted each other….. Today, you might say with justice that Roman Catholics and Protestants do not exist; what exists now is that every man is a citizen, an equal citizen of Great Britain, and they are all members of the Nation."

That something as toxic to Jinnah’s secular vision as the Objectives Resolution was carried in the same Assembly within a year of his death shows how quickly and meekly the nascent State of Pakistan surrendered to the very Islamic constituency which opposed its creation in the run up to the Partition. The capitulation has continued over the course of the State’s lifespan following the 1949 Objectives Resolution, the present surrender to the Rizvi Brigade being only the latest in a long litany of cynical and regrettable climb downs. If this trajectory continues in the country - a nation raised on the extolled virtues of shedding blood and sacrificing one’s life for the religious cause - a bloodbath that tears up our social and national fabric is inevitable.

It’d be easy for our guardian establishment to dismiss each of these two options presented above as "impractical". However, what is really impractical and dishonest is this dual policy of continuously stoking religious nationalism amongst the masses while expecting at the same time that our British-style semi-dysfunctional institutions will somehow deliver us a modern, tolerant, prosperous society modeled on the present-day west. It is time to make a decision. Choose wisely, but do choose and then stay the course.

A theocracy or a secular State