Braving a mob of rioting protesters, on the day Aasia Bibi was acquitted, en route to Lahore… 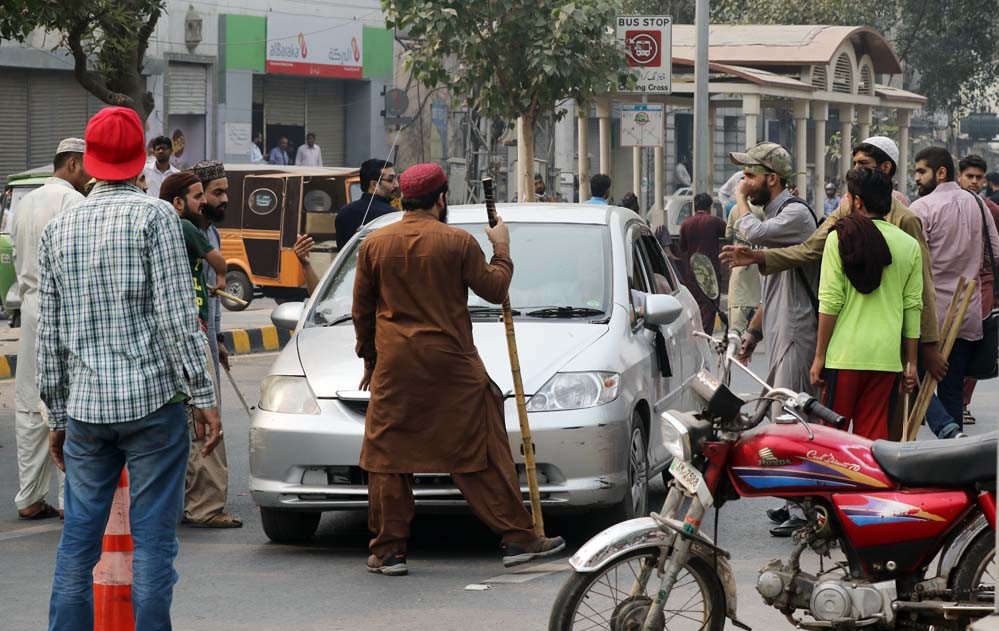 "Time is of the essence!" was the message I read on my WhatsApp amidst innumerable messages from other parents in the early hours of November 1, after a restless night at our accommodation.

The thought of leaving a semi locked down Islamabad for Lahore after the acquittal of Aasia Bibi seemed daunting. News was pouring in from social media and fellow travellers that the Motorway would be closed as protests and riots were expected across the country. Leaving for Lahore with a handful of young swimmers weighed heavily on my shoulders. At 6am, with the sun slowly rising, the Punjab team bravely embarked on the journey to Lahore. There was an ominous chill in the air.

The young swimmers were exhausted after two days of competitive swimming at the Championship and soon fell asleep in the bus till we reached Bhera. Nothing seemed amiss at the Bhera services and all seemed peaceful. A good omen, I naively hoped.

"Please keep moving! The protestors are gathering at Sheikhupura. The sooner you cross, the better!" It was 8:43 am. We hurried the girls to finish freshening up and resumed our journey. Not long after Bhera, our coaster slowed to a stop with a beeping sound resonating in the bus. We were reassured by the two drivers that the antivirus software was updating and we will have to wait it out till it stops. This unexpected break gave me time to share our location (via WhatsApp) with the other swim teams and parents, and here we learnt that another team’s bus had broken down too. Another 25 minutes lost on the motorway.

Our drivers were in constant contact with other drivers who kept us informed about the reality at hand. Soon we stopped at Sukheki and checked with the Motorway Police helpline and Islamabad Control regarding the situation at the Sheikhupura Interchange Bridge. We were told that an angry throng of protestors were pelting stones at the vehicles and the brave policemen were using teargas to disperse them. After every 15 minutes, traffic at the Interchange would resume moving and vehicles were given a go-ahead.

A mere 12 kilometres away from the Interchange we got stuck behind hoards of trucks and buses en route to Lahore for the Raiwind Ijtema on the following Friday. Small carts selling kulfi and chanay (dry roasted grains) were making good business with civilians biding their time, standing by their vehicles. Our drivers soon joined fellow drivers and policemen waiting by the wayside, seeing the perilous situation unfold.

I felt reassured seeing the four contingents of police parked on the parallel road -- help was nearby if things soon got out of control.

So, here we were, a coaster of young girls and women stuck on the motorway amongst a chaotic array of men and vehicles. We told the girls to keep the curtains drawn and sit quietly so as to not draw attention to a bus full of vulnerable women. This only seemed to inspire more fear in the girls.

After being stuck for nearly two hours, traffic started moving again and, as we approached the interchange bridge, we could make out a mob of angry men yielding weapons and sticks. The police did not waste any time in shelling at the protestors. The police was under attack and were covering their faces with pieces of cloth and wet Keffiyehs given to them by the growing crowd.

As this violent scene unfolded before our eyes, we were on the edge of our seats, peering out from behind the bus curtains, stunned at what we were seeing. We offered our cold water bottles to the policemen protecting us from our own countrymen. It was a sorry sight we did not want the young and impressionable minds with us to witness.

The angry mob was relentless in their pursuit and reciprocated violently by throwing the shells back at the police, the intensity with which this was happening felt like being caught in the crossfire of ricocheting bullets. The mob was persistent in provoking the police and 15 minutes seemed like 15 hours, with us stationed a kilometre away from the bridge.

It was 11:43 am. Suddenly a group of Pakhtun men joined the police and stomped towards the threatening mob. This seemed to have set something off, and the mob started running alongside the bridge. Adrenaline kicked in and our driver Naveed attempted a series of driving moves Jason Statham would be proud of, swerved the coaster that was cramped between vehicles and onto the service lane. Our second driver played navigator and jumped out of the coaster to guide a clear path for us.

Amidst all the chaos, my colleagues and I instructed the girls to sit in the aisle and duck down. We did not know how rough the ride was going to get. If the violence escalated, running out on to the road was out of the question. The hooligans showed no signs of slowing down, and staying put in the coaster was our only option. A loud, clamouring noise was the last straw and our young swimmers, stricken with fear, had started crying. I was surprised they had held on as long as they had.

As fate would have it, it was our driver banging on the door, alerting us to open it as he rescued a fellow simmer and her mother from their car that had come under attack. We ushered them inside to safety. They were breathless as they recounted what happened and luckily had the presence of mind to run from their car.

We picked out shards of glass from their hair. Our two drivers employed good crisis management skills and soon had us zooming away from the maddening crowd. We got lucky, or so I thought.

Driving back on the one-way road, the Motorway Police directed us to wait at Khanka Dogra, and then told us to cross the Hiran Minar Hafizabad toll plaza. Thanks to many well wishers we were continuously being guided by the police, although facing a national crisis.

We remained parked at a dhaba for another two hours, waiting for someone to help and take us to Lahore via Sheikupura city. The young girls famished and scared after what was a terrifying bus ride, ate silently, not entirely sure they were completely out of danger. Security personnel were calling and we were being instructed to move into the city.

Two gentlemen came to our rescue and to my surprise one of them was a cousin. The knot in my stomach that felt like a black hole of anxiety for the last few hours started to untie. We followed one of the men, Humayun, in his car to his house in Civil Lines. We breathed a sigh of relief and freshened up in the safe sanctuary of a Colonial era house. Lush lawns, open spaces, and even a bird menagerie were a sight for sore eyes and tired bodies. An elaborate and delicious lunch was served which was just what we needed after an exhausting trip.

Elite Force was rounded up and so was the MWP at the residence, and I urged the other teams and friends stuck on the Motorway to join us in Sheikupura. It was unfortunate that they could not, and were stuck a couple of kilometres away from the Lahore toll for five hours. However, they were grateful for the food and the water that was offered to them by members of the Tableegi Jama’at; these small mercies were the true portrayal of Islam in practice.

The girls got a chance to stretch their legs and played football in the garden, while my colleagues and I discussed our impending departure with our host. It was news that the Chaliswaan of Hazrat Imam Hussain (RA) was scheduled for Friday in Sheikupura. It was vital that we leave during the night once the MWP gives us the go ahead to travel. At 12:45am we woke the sleeping swimmers and mothers, and were back on the bus, escorted by the Elite Force squad and MWP. It was drizzling, and chilly. The motorway was glistening with fresh rain, and we were finally heading home.