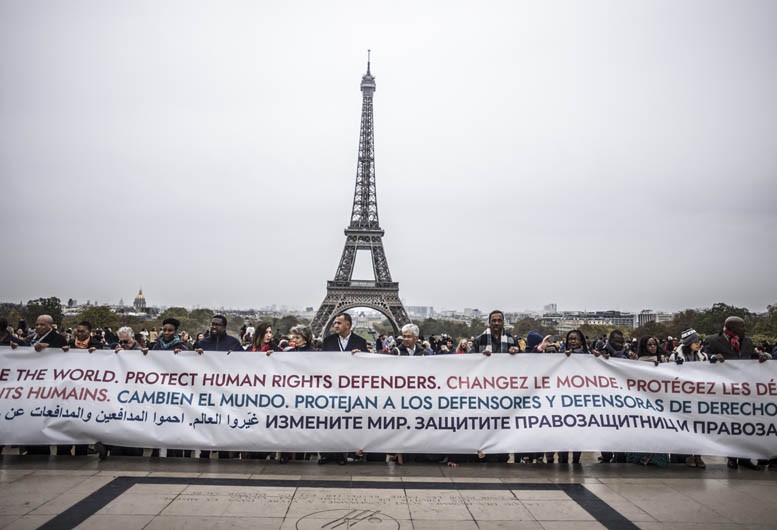 Human Rights Defenders World Summit 2018 held last week (October 29-31) in Paris brought together hundreds of rights activists from all over the world in the chilly weather of France.

In 1998, the UN General Assembly adopted the "declaration on the rights and responsibilities of individuals, groups and organs of society to promote and protect universally recognised human rights and fundamental freedoms" which is known as "Declaration on human rights defenders". This was in response to the growing demand for the protection and safety of human rights defenders on the agenda of governmental and non-governmental agencies and the UN itself.

Human Rights Defender is a term used to describe people who individually or collectively protect and promote human rights within the internationally accepted norms of equality and non-discrimination. They are identified by a range of actions they are engaged in which includes supporting victims of human rights violation and seeking an end to impunity and injustice.

The Paris conference obviously looked back at 20 years since the declaration and deliberated upon the achievements and challenges that have emerged during the last two decades.

Undoubtedly, human rights defenders world over have played a critical role in the protection of human rights, and the promotion of the values of justice, democracy and rule of law and have stood for those who may not have been able to stand for themselves otherwise.

The events during the last two decades have further increased the importance of the role human rights defenders can play as we have witnessed widespread violation of rights, particularly in conflict zones and human catastrophes such as refugee crises.

Those defenders who raise a voice against dictatorships, injustices, wars, tyranny, oppression and abuse are at the highest risk today.

States all over the world, in the name of national security and war on terror have adopted policies and laws, which are mostly against the UDHR, have negatively impacted progress in the area of realisation of basic rights and endangered the lives of those standing against human rights abuses.

Those who stand for justice and rights are under increasing attack both from state and non-state actors as well as commercial corporations. These attacks include intimidation, harassments, surveillance, and character assassination, restriction on movement, detention, enforced disappearances and even killings.

Pakistan, in recent years has itself lost three brave human rights defenders -- Advocate Rashid Rehman in Multan, and Parveen Rehman and Sabeen Mahmud in Karachi respectively in 2014, 2013 and 2015. All had spent their entire lives defending the rights of those who could not stand for themselves.

Therefore, those standing for fundamental freedoms not only deserve solidarity and support but a guarantee from states for their own protection and security.

The declaration on HRDs put the responsibility on states as each state has not only a duty to protect and promote human rights of all its citizens but to take specific measures for the safety and security of those who work on human rights. It provides a wide scope of work to the human rights defenders that includes seeking protection of human rights at national and international levels, conducting fact findings, protecting right to association and assembly, seeking information and criticising government policies and actions that violate human rights.

As the world is crying for better protection of human rights defenders while observing the 20th anniversary of the declaration on human rights, it is important to mainstream the issue in Pakistan.

Though Pakistan supported the declaration on human rights defenders passed 20 years ago, the country’s later actions have been disappointing in this regard. In November 2015, Pakistan chose to vote against a UN general assembly resolution recognising the role of and seeking protection for human rights defenders. The general assembly passed the resolution by 117 votes and Pakistan was among the 14 states which voted against it.

This was three years ago but the situation must change now. More responsibilities are on the shoulders of Pakistan right now as it was elected to the 47-member UN Human Rights Council last year to improve the human rights situation on the ground. The country has the opportunity to play a key role as a global leader.

The beauty of the declaration on defenders is that it does not address states only but expects all actors of society to play their role in providing a safe space to those working on human rights.

Obviously, states have the prime responsibility, and one way to fulfill this responsibility is to come up with specific legislations and policies to recognise the critical role human rights defenders can play and to make a commitment for their protection. This will also help compensate for the mistake of voting against the resolution in 2015.

In this regard, independent state institutions like National Commission for Human Rights (NCHR) can come up with a proper protection mechanism for human rights defenders.

Public at large and those with monetary interests such as businesses and corporates also have a responsibility towards those who stand for rights. We all can claim to be human rights defenders but those who do specific tasks need specific attention.

Regardless of the relevance of the Paris Summit and its recommendations, let us have our own action plan of defending the defenders in Pakistan.

The writer is a human rights and labour rights activist based in Karachi.