How not to die for water? 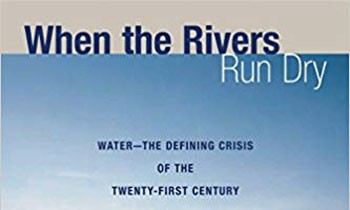 They say: "There is no such thing as free energy." What a whopping lie. The earth has been the recipient of free energy for billions of years, a beneficence which has made it livable. As long as the sun is in place we shall not lack free energy, although right now we don’t have the know-how to harness it on a massive scale.

I don’t exactly know how long Homo Erectus has been around. Many millennia perhaps. He survived because of sunlight, without being aware of the fact. There are two other gifts for us. Nature has been extremely kind. The air we breathe, without which we will die instantaneously. The other is water, without which we will also die, slowly and excruciatingly. We also use water for cultivation. A severe shortage of it can lead to famine. Our body is mostly made up of water.

How do we show our gratitude to nature? We are recklessly polluting the air. We are polluting the water we drink and use for irrigation. Sorry folks! We can’t do anything to the sun. It is too big and too hot an issue to handle.

Once upon a time, a white man wanted to buy a tract of land from a native American and the latter said: "Can you also buy the sky? When you have cut down the last tree and poisoned the last river, what will you eat? Your money?" It is something we must ponder upon. Our predicament also, but do we have any sense?

Right now, water is a burning issue. What a mishmash, water seen as a thing on fire. I have a book beside me, entitled Jub darya sookh jatay hain, a fluent translation by Saqlain Shaukat of When the Rivers Run Dry by Fred Pearce. It is all about water which is becoming increasingly scarce and polluted. It is a sensible and close look at a problem which concerns us all and one that, if mismanaged, can turn into an irredeemable disaster.

According to Pearce, there are, or maybe were, huge underground reservoirs of water but in our greed, we have almost succeeded in depleting them. Nature can replenish them, of course, but it will take at least one thousand years to do so. We have wasted a thousand years of plenitude in a matter of decades.

Rainwater is something we get free and often, though not always, in a distilled form. It should be conserved.

Before referring to the parlous state of affairs in the subcontinent we may as well take cognisance of what happened to some places in Central Asia. During the Soviet era, much of it was turned into a cotton belt. It was cotton or nothing. It paid off for a while but then things began to go wrong. The Aral Sea, in the 1960s, had an area equal to Belgium and Netherlands. Its blue waters abounded in fish. It was picturesque, a place worth visiting. Now it is no more than three huge puddles of extremely saline water. The area around it, known as Karakalpakstan, is enmeshed in dire poverty. An investment of trillions of roubles has changed nothing. Independence is a meaningless word. The people exist on a subsistence level that is no better than one found in Africa’s shanty towns. A case of unconscionable mismanagement.

The picture in Pakistan and India is not rosy either. It must be admitted that there is more awareness of the grim reality next door. We are content to glide blindly into disarray. The problem is three-fold. Excessive use and waste of water mean that you have to bore deeper and deeper to achieve your aim. The presence of arsenic in water is playing havoc in Bangladesh, Bihar and Uttar Pradesh. Traces of fluoride also pose a threat. Then there are factories which pour their effluents into rivers. Those who own these factories are criminals who will never be punished. Add to these the land rendered useless by salinity and waterlogging. In Pakistan, five lakh hectares have been gobbled up by the sea.

Pearce is not a proponent of mega-projects, like big dams or huge networks of canals or foolish attempts to tame rivers. These plans look impressive as blueprints, but their utility is marginal or temporary. He mentions three projects which appear grandiose as well as bizarre. During the Soviet era, a plan was drawn up to redirect part of the flow of rivers Ob and Yenisey in Siberia, from north to south, to irrigate Central Asia. Whether the plan would have worked is not known. After the breakup of USSR, the Russians lost interest in looking after the newly independent countries in Central Asia.

China has a similar gargantuan scheme to divert water from Tibet to its northern provinces. A costly affair which may not be worthwhile. India has been toying with a comparable project which envisages a link-up of all the rivers in the north and channelize their waters to irrigate the far south. It has been described as hubristic even by Indians who have the necessary expertise.

So where does it leave us? Pearce comes up with a number of simple and sound suggestions. Rainwater is something we get free and often, though not always, in a distilled form. It should be conserved. We must make a concerted effort to save as much of it as we can and allow it to percolate underground. Rainwater may also be stored. All this can pay rich dividends. Many in India are doing it, with handsome results.

Another thing we can do is to adopt better irrigation methods. Use less water to better effect. Drip irrigation is a good idea. Pearce mentions a new strain of rice which can be grown in muddy fields, obviating the use of too much water. Here is a book which convincingly shows that some of the old ways of surviving the vagaries of the world are not really out of date. And for heaven’s sake do something serious to check the population explosion.

Dams are merely stopgap measures. Tarbela is silting up. After a while, it may become redundant. Dams partake of man’s mortality. Rains are immortal. Sometimes we fail to receive them. All the same, they are a blessing. Don’t bet on or dream of dams. Read this book.

How not to die for water?