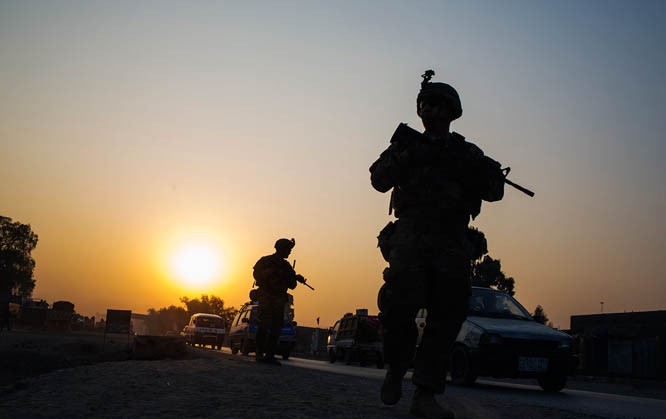 Afghanistan has incessantly complained about Pakistan’s alleged involvement across its side of the Durand Line. Recently, Afghan President Dr Ashraf Ghani alleged that the murder plot of slain Kandahar Police Chief Gen Abdul Razzaq Achakzai was planned in Pakistan though Taliban took credit for assassinating him in October. In response, Pakistan Foreign Office issued a strong rebuttal to the accusation. In the eyes of Afghan government, its people and the world at large, Taliban are seen as Pakistan’s proxies.

Within Pakistan, one opinion, held by former bureaucrats from the Foreign Office is that Pakistan does not have much influence on Taliban which it once had. This opinion is not without a compelling reason: with Taliban spreading their tentacles to no less than 40 per cent of Afghanistan, the Islamist militia does not need much help for safe havens in Pakistan. They advise policy makers to apprise the world, especially the US, about Pakistan’s diminishing influence over Afghan Taliban. The argument is further bolstered with the fact that Taliban have been receiving help from other regional players including Iran and Russia. It is interesting to know what Pakistan wants to achieve through Taliban.

Pakistan envisages an Islamist government of an overwhelming Pashtun-dominated Taliban in Afghanistan to neutralise any Indian influence on Kabul, and denies shelter to disgruntled and separatist Pashtun and Baloch leaders on the Afghan soil, if there are any. The question worth asking is will Taliban still be a preferred choice even if Pakistan completely loses its influence over the militant movement?

We can look at the question by exploring what possible options Pakistan’s ruling elite think they have at their disposal to realise their goals across the border. Seen through the lens of power politics, they see two available choices. One is the ascendancy of Pashtuns -- without Taliban -- and Tajik dominated setup, continuity of the post-Taliban Afghanistan. For Islamabad, this is the worst nightmare. The second choice, conceived by Pakistan, is the Pashtun-dominated Taliban rule, a replication of late 1990s. This appears to be an overt impossibility. From Pakistan’s perspective, the greater role for Taliban translates into greater influence of Pakistan.

This argument is treated as axiomatic for a reason. Taliban, being Islamists, are seen as intrinsically anti-India and anti-nationalist. The militia’s brief rule of almost complete Afghanistan in the late 1990s attested to the veracity of the argument. Will Taliban be a reincarnation of their past if they get any political role in future? That may not be the case for two reasons.

First, in an increasingly interdependent world, and in the face of stark reality that Islamists won’t be the exclusive rulers of Afghanistan in future, Taliban can’t afford to lose Tehran, Delhi and Russia for the sake of Islamabad.

Secondly, Afghan dependence on Pakistan is already waning. By July 2018, trade volume between the two countries dropped significantly from $2.5 billion to $500 million this year. India and China have been filling the void in an increasingly competitive trade market. Similarly, for Afghans, India has been substituting for Pakistan as a more preferred destination for cheaper medical treatment. Thus, given the lack of availability of any better alternative option, Taliban remain the preferred choice even if they choose to be indifferent to what Islamabad aspires in Afghanistan.

This punitive strategy has had severe implications both at home and abroad. Internationally, it has earned the country ire of the US which has, at times, penalised Pakistan for using Taliban as tools of foreign policy goals. It has also added to instability in Afghanistan with its spillover into Pakistan, especially its northwest tribal districts -- former FATA -- other regions of Khyber Pakhtunkhwa and the country at large.

The current wave of grassroots Pashtun nationalism led by aggrieved youth from tribal districts is the outcome of this bellicose strategy. The strategy has only forced Afghan leaders and people to look towards Delhi even further. At regional level, Pakistan’s Afghan policy has been rivaled by the combined strength of Russia, Iran and India. It takes Islamabad to rethink and revisit at least the means if not necessarily the ends of its Kabul policy to be successful.

Pakistan needs a shift away from geopolitical perspective to its geo economics counterpart. First, Pakistan should craft a policy, which does not see Kabul through the prism of Delhi. Secondly, political differences should not affect cooperation in the economic realm. It would be something akin to relationship between China and India. By the end of 2017, bilateral trade between the two countries reached historic high of $84.44 billion notwithstanding tensions running high on border disputes between them.

Coercive instruments, characteristic of geopolitical outlook, of Pakistan’s Afghan policy, are the gravest threat to Islamabad’s interests in Afghanistan. Geopolitical means as instrument of foreign policy has increasingly been outliving its usefulness. The sooner we take cognisance of this fact, the better it is.