Khusro Mumtaz
In the picture
November 4, 2018 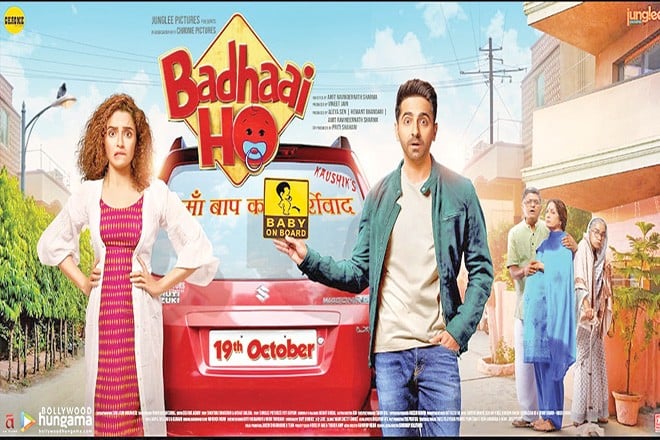 Powered by a wonderfully understated and moving performance by Neena Gupta (if she doesn’t win some awards for this it will be a travesty) as Priyamyada, an unexpectedly expecting middle-aged wife and mother, Badhaai Ho sticks its gentle laughs and also pulls at your heartstrings at just the right moments. Gupta is well-supported by the rest of the cast, including Ayushmann Khurrana as Nakul, her elder son, thoroughly embarrassed by the idea of her mother bringing another sibling into the world just when he’s contemplating marriage himself. Gajraj Rao’s mild civil servant, the poet-at-heart and father-to-be Jeetu is another winner (as is the entire relationship of Jeetu and Priyamyada whose tender chemistry is sweetly and superbly reflected in a smile and a touch and a look). Surekha Sikhri as Jeetu’s mother is also good though almost overplays her hand at moments. Sanya Malhotra as Nakul’s girlfriend and Sheeba Chaddha as her snooty mother (the mother and daughter are at least a couple of rungs above the solidly middle-class Kaushiks on the social ladder) are also fine in their roles. Do watch this one.

Kajol is Eela, a single mum of college-going Vivaan (Riddhi Sen) who’s constantly hovering (hence helicopter) over her loving-but-resigned son. But she takes her smothering to the next level when she decides to enrol in the same college as her offspring. No, despite the similarities, this isn’t a remake of Melissa McCarthy’s Life Of The Party - it’s actually adapted from a Gujarati play. However, it could have taken certain cues from McCarthy’s film, which cleverly mined the comic potential of an older woman returning to college for her uncompleted degree. In Helicopter, unfortunately, the campus setting remains largely unexplored and the focus remains mostly on Eela and Vivaan’s relationship. Which could have worked but the movie suffers from leaving Eela an underdeveloped character along with some silly plotting (why Eela becomes a single mum doesn’t ring very true at all) and characterisation. That’s probably the reason why Kajol - a natural, intelligent actress - is forced to compensate by dialling up her natural effervescence to eleven and almost to the point of shrillness. The larger point of women defining themselves beyond their roles as daughters, wives and mothers is fine and dandy but the movie needed to move beyond clichés. Even the big musical finale (Eela had put a full stop to her budding singing career to look after Vivaan) doesn’t carry much of a punch.

Cut to chase: The film never takes off despite Kajol’s presence.