In his new book, Azmat Abbas shows the readers how the clergy and successive governments have manipulated madrasas for their personal and political advantages 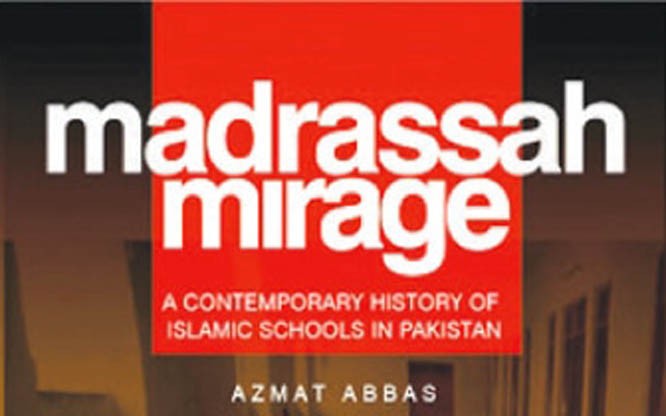 Heads shaved, bare feet, hobo bags hanging by their shoulders, they would fan out of a mosque school tucked away in the back lanes of our dusty village to beg for food for their supper or money or even used clothes once or two times a day after their class. A painful memory of the joyful days of my childhood in the early 1970s contrasting with theirs in every way: combed hair, polished shoes, school bag, neat uniform and, occasionally, some money to spend after school. Beyond these contradictory images, we were similar, in swaying to the din of our lessons recited or read by rote during class and in, often, not being allowed to pose questions to our teachers.

Private schools had only started springing up then and so, the bulk of Pakistani people had a choice of either a struggling public education system or madrasas that provided free education, boarding and lodging. No other complexity was involved in the madrasa phenomenon until in the late ’70s, and later the seminaries fostered religious extremism to prepare young Pakistani, Afghan and Arab men to fight against Soviet Union forces in Afghanistan. Then there were religious schools that spawned the hard-line Taliban and alerted the world to the dangers of indoctrination; some madrasass posed amid a crisis of governance and a breakdown of the primary education system.

Not the whole story, for sure, of the phenomenon that most researchers see the basis of orthodoxy in. And here is where Azmat Abbas stands apart from them. As a journalist who seeks to cover all sides to a story, Abbas brings a fresh perspective to the subject in his book Madrassah Mirage by putting it through a sieve of extensive field research and dozens of background interviews. If we ignore the typographical errors that come up here and there, sometimes giving a meaning different from the intended one, his book is an evidence of the rigour and analytical sensibility he has put in to show us how the clergy and successive civilian and military governments have manipulated the madrasas for their personal and political advantages. Avoiding painting the Islamic schools as benign institutions or "swamps of terrorists", he has documented their history, influence and role in Pakistan’s society and education system.

Focusing on the post-independence period, he goes back to the early years of the Muslim history when madrasas served as the only centres of education offering both religious and secular education; and then to the days when the Muslims rulers saw a decline across the world and especially in the Indian subcontinent, where in the face of the British Raj educational reforms, madrasas changed their character giving up secular education to be the self-styled protectors and promoters of Islam. Failing in providing access to education for all, the number of madrasas swelled from a few hundred in 1947 to more than 32,000 by the year 2017, exclusive of the thousands others that operate without any legal status or registration across the country. Providing education, shelter and food to more than two million students, these religious schools get funds from the government, charitable contributions from foreign sources and small donations from the public, besides the revenue generated from Zakat received by the students. The book does debate the sources of funding successive governments have not been able to choke.

Using images and infographics, the book shows the readers the type of syllabus being taught. A huge focus is onradd literature or refutation of other beliefs, though not as a part of the curriculum. The syllabus restricts the employment opportunities for the students to the religious sector and promotes ideologies of hatred. To quote Abbas here: for Pakistan, the role of madrasas is of existential importance and without reforms and exercising state control on these institutions, we are sitting on a simmering cauldron. Agreed, but now Pakistan is seeing a rise in the number of young people educated at posh universities being lured into extremism and terrorism.

Empowering students to think critically teaches them to challenge ideas, construct rational thoughts, and engage in meaningful debate. Cultural learning enhances their self-awareness and identity, opening their minds to different customs, practices, and traditions, and promotes comparative analysis. With such a well-rounded educational experience, educational institutions, particularly universities, would represent a battleground of ideas and opinions, and not of guns and bullets. Bigotry is what we need to weed out - from whatever is being taught at the public school system, the elite urban private institutions and the other stream of private education -- namely the madrasas. Only critical thinking can equip Pakistani students to take on the future.

(This an edited version of the article that appeared in print)